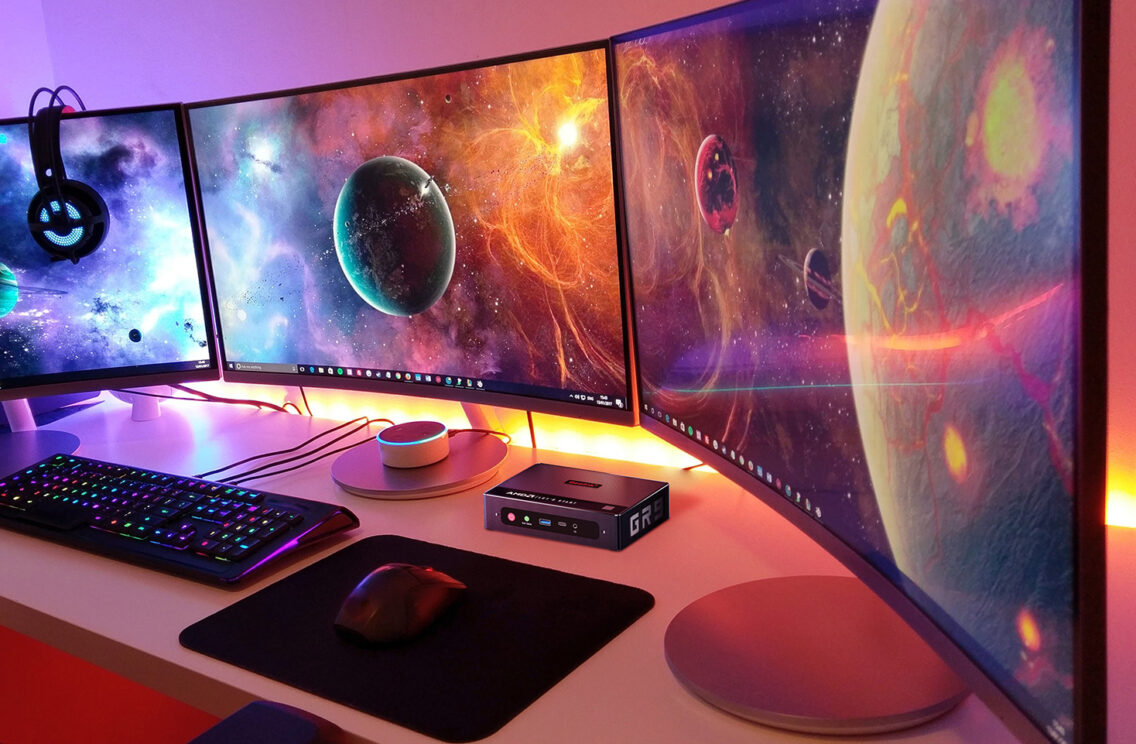 Mini PCs have come a long way over the years. Once a category largely relegated to low power duties, mini PCs have evolved to suit almost any type of user, whether it be for content creation or gaming.

Performance enthusiasts are exactly who Chinese company Beelink is going after with the GTR5. Firstly, it packs an AMD Ryzen 9 5900HX – a processor that is normally reserved for big and powerful gaming laptops. It comes with ample storage expansion options, RAM that can be configured to up to 64GB and a selection of ports including dual 2.5GbE LAN.

What’s more, Beelink has managed to fit all that performance into a chassis that is both smaller and costs significantly less than a comparable Intel NUC. The question is, does the performance stack up to the promise laid out on paper?

At just 16.5 x 12 x 3.9 cm in size and weighing only 678g, the GTR5 is extremely portable and can easily be thrown in a bag or mounted behind a monitor using the included bracket.

While it won’t win any design awards, the GTR5 is one of the better looking mini PCs available with a slick black chassis made from a sturdy magnesium aluminium alloy. Most of the top and sides of the unit are clad in perforated plastic for better airflow.

The bottom plate of the GTR5 is also made of metal and has some useful text printed on it. This includes how to enter the BIOS and select between different performance modes (more on this later).

The sides confusingly have ‘GR9’ printed on them, which seems like a misprint given that this unit is part of the GTR model line. The AMD branding and bright red Beelink badge aside, the GTR5 sports a fairly restrained aesthetic and should blend in comfortably on a desk or in an entertainment unit.

Regardless of configuration, you get the same Ryzen 9 5900HX 8-core/16 thread mobile processor with a boost clock of 4.6GHz and Radeon Vega 8 integrated graphics clocked at 2.1GHz. The physical design of the GTR5, including the port selection, also remains the same.

It is worth noting that unlike some other mini PCs, Beelink equips quality components from recognisable brands. For example, the RAM is from Crucial and the NVMe SSD is supplied by Kingston.

The GTR5 is stacked with a surprising number ports given its diminutive size. On the front, you’ll find the power button, clear CMOS button, a USB 3.0 port, a USB-C port (with support for display out) and the 3.5mm headphone/mic jack. Around back, the GTR5 has two more USB 3.0, two USB 2.0, an HDMI, a DisplayPort and two 2.5Gb Ethernet. There’s also the barrel jack for the 90W power supply.

It’s rare for a mini PC to come with a 2.5GbE LAN port, let alone two of them. This means you can use one for transferring large files to and from a NAS at ridiculously fast speeds (provided the NAS also has a 2.5GbE or faster connection), while reserving the other LAN port for a hard wired internet connection.

Another feature you don’t normally find on a mini PC is a fingerprint reader, which makes logging into Windows a breeze.  There’s also dual microphones built into the unit, and while it won’t replace the need for a proper headset, it’s serviceable enough for the odd Zoom call.

One notable omission is the lack of Thunderbolt 3 or USB 4 ports. Thunderbolt is no longer exclusive to Intel chips hence why we’ve started to see the port show up on some AMD motherboards in the desktop PC market – so it’s a shame not to see it here.

The GTR6 is well equipped when it comes to wireless connectivity, with support for the latest WiFi 6E standard and Bluetooth 5.2.

In terms of storage expansion, the internal M.2 NVMe slot can hold up to a 2TB stick. There’s also a slot for another M.2 drive as well as space for a 2.5-inch SSD/HDD.

Most mini PCs and laptops run on the Home Edition of Windows OS, but the Beelink GTR5 comes with Windows 11 Pro. Home users won’t see a difference but for power users, Windows 11 offers some extra features like remote desktop and Hyper-V client for virtualisation. Another nice touch is that Beelink has included a completely clean version of Windows 11 Pro meaning there’s no pre-installed third party applications or bloatware.

The GTR5 supports various flavours of Linux too including Ubuntu and Manjaro. I tried installing my favourite distribution of Linux – the retro-gaming focused Batocera – and it ran with no issues.

I’ve been using the GTR5 as my desktop replacement for over a month now and the GTR5 has been keeping up without really breaking a sweat. My day-to-day workflow mainly consists of running multiple browser windows with more than 20 tabs open and the likes of Slack and Spotify running in the background as well as some light photo editing in Adobe Photoshop.

I also tested the performance while having the GTR5 connected to three external monitors simultaneously via the GTR5’s DisplayPort, HDMI and USB-C connections. With the resolution and refresh rate set to 4K at 60Hz, I didn’t notice any dip in performance when connected to all three displays. The best part is that the fans remained super quiet during day-to-day productivity.

Before putting the GTR5 through more demanding tests, I switched the GTR5 into performance mode, which you can do with a couple taps in the BIOS. This increases the maximum power draw of the 5900HX CPU from 35W to 45W, giving the chip a bit more performance headroom.

For comparison, I have my Intel NUC11 Pro, which at $1200 retails for roughly the same price as the GTR5. Keep in mind, the NUC11 Pro comes barebones out of the box so you have to supply your own SSD and RAM.

Moving onto gaming, I was curious to see how well the GTR5 would perform. This is considering it has some decent integrated graphics supported by a beefy CPU, which should help boost frame rates at lower resolutions.

GTA V is an older title but still incredibly popular thanks to its endless support of mods released by the community and online multiplayer. I was able to run the game in 1080p at a near constant 60fps with all graphical settings turned to high.

With Mortal Kombat 11, I was able to hit 60fps on medium graphical settings but I had to drop the resolution down to 900p to get there.

More demanding titles such as Halo Infinite, God of War, Control and Doom Eternal struggled to hit 30fps at 1080p on even the lowest graphical settings, forcing me to drop the resolution down to 720p to get smoother performance.

With less demanding titles such as League of Legends, I was able to hit 4K at 60fps on the highest graphical settings.

It’s worth noting that the fans can get quite loud when running the GTR5 at full tilt, with the noise level being comparable to a full sized gaming laptop. Temperatures hit a maximum of 85 degrees and there was no evidence of thermal throttling.

In short, while the graphical performance isn’t going to magically outperform a system with a discrete graphics card, the GTR5 does deliver some respectable gaming performance as far as mini PCs go.

I look forward to seeing what Beelink might be able to achieve in this small form factor with AMD’s 6000 series of processors, which come with significantly more powerful RDNA2 integrated graphics.

If there was ever a product that exemplifies how far mini PCs have come, the Beelink GTR5 is it. Of course, Intel has been churning out its own take on the mini PC for years with the NUC line but it often comes at a price premium, and requires the user to source their own RAM and storage.

My main qualm with the GTR5 is the lack of a Thunderbolt port, which rules out the possibility of upgrading the machine’s graphical performance with an external graphics card (GPU).

The GTR5 offers better performance than a comparable Intel NUC and at a much lower price, making it a viable workstation replacement or for anyone looking for a small but powerful PC that can be easily slapped onto the back of a monitor or television. The GTR5 is likely to remain at the top of the mini PC performance charts at least until we start to see AMD’s 6000 series make its way to the small form factor PC market later this year.