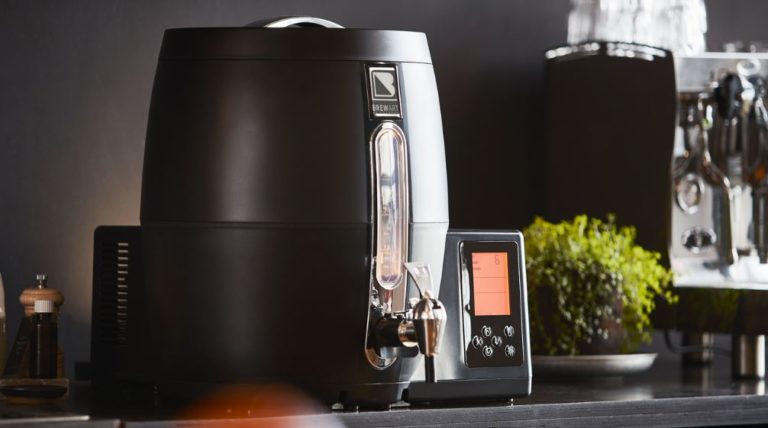 Well, BeerDroid came through – ten litres of very palatable American Pale Ale. No, let me rephrase that – 10 litres for $34 of excellent Pale Ale – even if I do say so myself (and I have never homebrewed before).

We reviewed BeerDroid here and to summarise – it is an app-driven, fully automated, home brewing device.

You add the main dry ingredients (from a box called BrewPrints) to 10 litres of water. The Android or iOS app keeps you fully informed of the brewing stages – propagate, ferment, kegging and storage.

Our only BeerDroid fear was that we had to wait a few weeks or so to find out if it was a success or dishwater. “O ye of little faith!” is all I can say.

We reached the kegging (or bottling stage) in about eight days after loading BeerDroid. At that time, it enters a holding pattern until you have time to keg or bottle.

Kegging/bottling is BeerDroid’s way of fermenting sugar to add CO2 (carbonate) to the brew. That takes a couple of weeks or more depending on the brew. It does not hurt to keep it in the kegs longer – once the sugar and hops have done their job its ready to chill and drink – but it will not go off for a year or so.

You can access BeerDroid’s extensive (and obviously idiot proof) ‘how-to’ video library here, but I wanted to show you the kegging or bottling process

If you chose kegging over bottling, you must purchase a BrewFlo – a refrigerated tap device that holds a 5-litre keg (around 18 x 285ml/10 fl oz middies/pots).

You place the keg into the BrewFlo (website here), and in about ten hours it brings the temperature down to 3° (adjustable upwards). BrewFlo estimates the amount left – to the nearest quarter keg. You can also put the keg in the fridge. BrewFlo’s job is to keep it cold for serving.

We mentioned earlier that sugar is added at kegging stage to produce natural carbonisation. This is instead of injecting CO2 as many commercial beers do.

To get the beer out of the keg (as it is not under pressure) BrewFlo pumps air around the inner keg membrane to push the beer out. It is very effective, and beer flows evenly into the glass.

Your only decision is whether you buy the BrewFlo at $699. It is nice having your own beer on tap, and the contents of a keg should last at least a year in this environment.

A 12 x 740ml bottle kit is $25 (bottles and bottling hardware), and extra bottles only are $16 for 12. You need about 14 bottles for the ten litres of beer. Bottles and hardware are reusable, so it costs $9 one-off for the hardware and $1.33 per reusable bottle. The bottling hardware looks like it could handle crown seal bottles or stubbies as well. Each bottle needs Carbonation Drops (sugar/glucose) added – two per bottle for up to 750ml. Price $3 for 24 drops.

Bottling removes the need for the BrewFlo tap/keg system and maybe the best way to start your homebrew adventure. We say that because there is no pressure to drink that 5-litre keg dry!

And how did it taste?

Brilliant. I chose American Pale Ale as I like Coopers Pale Ale and I tend to drink Pale Ale over lagers. I know how a good Pale Ale tastes.

Pale Ales have a hoppy flavour with a nose (scents of pineapple and passionfruit). You get a sweet taste on the front palate and a lovely hoppy (not overly bitter) finish on the back palate. Overall it is a ‘clean’ refreshing beer – not cloying or oily.

Compared to the Coopers Pale Ale, which is for want of a better word is dry; this has a very pleasant sweetness.

This did not disappoint in terms of flavour. Yes, please, I will have another middy.

Pale Ales tend to be a little darker than lager – more of a golden brown than a light golden hue. This was darker than the Coopers but nowhere near an IPA.

It is not as heady and nowhere near that in the photo. As no CO2 is added – it all comes from the sugar fermentation – it is a low-fizz beer. You get a small head, and it remains fizzy to drink – but I would recommend drinking this from a middy rather than a pint glass. Before I bought a BeerDroid I would seek advice from their support experts on ramping up the carbonisation a little.

Alcohol: We did not measure it but BrewPrints state 5.5%

BeerDroid is foolproof. As long as you take care to sterilise everything, any BrewPrint kit will work – have no doubt. It is not time-consuming as everything is pre-measured.

Fun – the app is your daily involvement and spurns you on. It takes several days to get to kegging. Plus you get the satisfaction of brewing a good beer.

Kegging or bottling is frustrating – while you can get that sugar fermentation in as short as two weeks, a longer period may produce a more balanced beer.

Buy it as a gift for the person who has everything – it is not really about skill. I recommend the BrewFlo as well, but equally botting adds more flexibility.

Best of all – 10 litres for $34 – plus of course the cost of the BeerDroid and BrewPrints.

I have a homebrew mate, and he says that the BeerDroid could be altered to make his beer – the app has fully customisable timings and temperatures. Considering he uses buckets and kegs and his place smells like a brewery – BeerDroid would be a fuss-free, cleaner and more consistent answer.

Our only concern is that the BeerDroid and BrewFlo must go back. It was kind of nice to have beer on tap in the office kitchen.