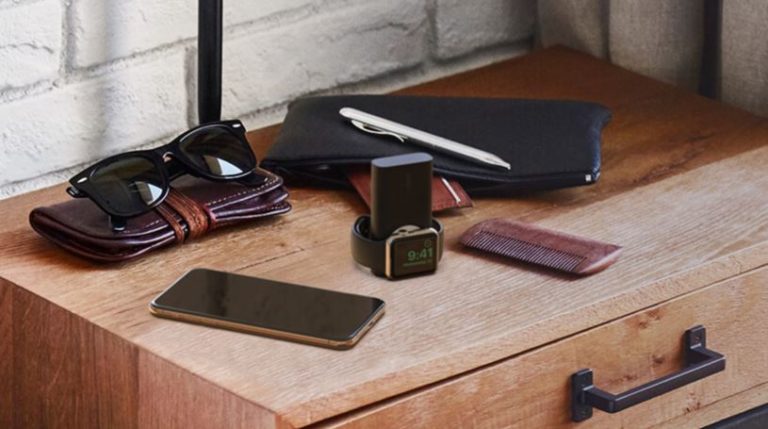 The Belkin BOOST↑CHARGE Power Bank 2K for Apple Watch (all series) is exactly what it says – a Qi wireless charger and power bank for an Apple Watch.

Design-wise the BOOST↑CHARGE Power Bank 2K is about the size of a matchbox (79 x 42 x 17mm x 70g) in basic black with a white concave magnetic charge plate. On one end is a micro-USB socket for 5V/2.1A (maximum) charging and four LEDs to approximately indicate 25% increments of charge.

It came indicating 75% charge, so we set about topping the rest up. No charger comes with it, but a 180mm short USB-A to micro-USB cable is in the box. Using a 5V/2A charger it took over an hour indicating a full charge at around four hours.

In one further subsequent test from almost 0-100%, it took just over five hours. This is slower than expected.

We would love to say that a 5W (5V/1A) Qi charger works as fast as a 5W wall charger but by it nature Qi seldom achieves over 70% cy.

As a control, we ran down an Apple Watch 4 (easy to do if you use GPS) and charged from its genuine charger cable/plate – time just over two hours.

Rinse and repeat.  We used the charged BOOST↑CHARGE Power Bank 2K, and it took nearly four hours. This indicated closer to 50% efficiency. Had it achieved 70% efficiency, this should have been closer to three hours.

You should be able to use this with a micro-USB charger attached (flat mode), but we caution that it may impact on power bank life as micro-USB does not have smart charging like USB-C USB-PD.

The test 44mm Apple Watch 4 had a mesh band. Our tester placed it on the BOOST↑CHARGE vertically in bedside mode (not flat on a table as you would expect). We guess using it vertically means a less accurate charge plate placement and therefore some additional loss of efficiency.

For the fourth test he placed it horizontally (flat) and it came down to just over three hours.

Recharges in the tank

Assuming your Apple Watch lasts approximately 18 hours (depends on the version, size and use) the BOOST↑CHARGE Power Bank 2K was exhausted after the third charge, so it has about 54 hours juice in it. Belkin claims 60 hours so, pass.

MFi Certification means that the BOOST↑CHARGE Power Bank 2K for Apple Watch has is specifically for the Apple Watch and meets Apple performance standards.

Belkin Connected Equipment Warranty, which will repair or replace devices connected to the charger that suffer electrically-caused damage, up to a value of $2,500.

Expensive is in the eye of the beholder. A genuine 5W Apple watch Magnetic charging Qi dock is $129 and seems to suffer from similarly slow charge speeds.

Even the genuine USB-A to watch charge pad is $45 but delivers better efficiency.

Here, you have a micro-USB chargeable power bank that at a pinch replaces the watch charger. Yes, it would have been better with Lightning or USB-C PD, but it does need it – micro-USB is fine.

On that point, you could also just use a standard or USB-PD power bank and the genuine cable and achieve a similar outcome.

Our tests do not quite live up to the hype, but it is well-made and fit for purpose and maybe a very convenient second charger for travel or those that use the Apple Watch battery faster.