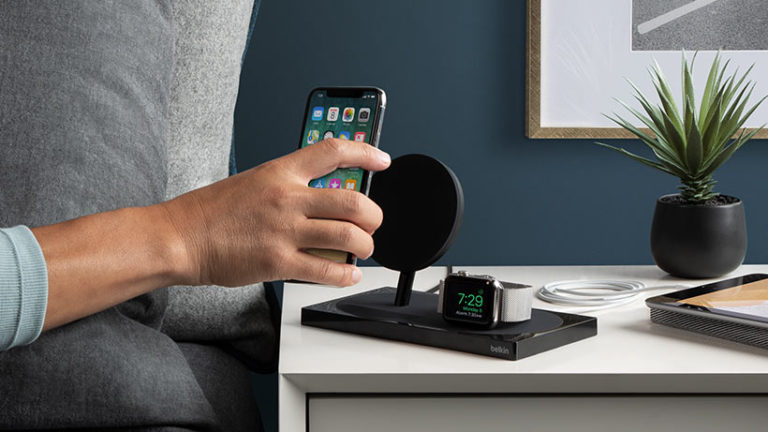 What is so special about the Belkin BOOST↑UP special edition wireless charging dock? Well for starters it is one of the more expensive docks for the Qi-enabled iPhone and magnetic induction charging Apple Watches.

To be fair, it is probably the best third-party Qi, wireless charge 7.5W iPhone docks we have reviewed. It is solid, heavy, well made and black – although there is a white version as well. And it competes squarely with Apple’s own AirPower dock that has been coming for so long we are comatose with anticipation.

Did we mention expensive – I suppose that at $249.95 it is cheap compared to your eye-wateringly expensive iPhone XS Max and Apple Watch, so the value is in the eye of the beholder. To be fair people still buy Rolls Royce and that is where this sits.

It is an impressive desktop device in two-tone black. Website here

The iPhone (we will use the XS Max as a reference device) takes from 3.5-4 hours to charge via the standard Apple wall charger supplied. Yes, you can buy a USB-C fast charger (rated from 45-85W) and charge it a little faster.

But, no matter how much wattage a Qi wireless dock generates it can only charge the iPhone at a maximum of 7.5W. That takes charge time from 0—100% to a tad under 8 hours.

By comparison, a Samsung Galaxy Note9 accepts 15W Qi charging and it takes a little over 3 hours. The Samsung will work with this charger albeit at half speed.

The best use of this stand is at your bedside for over-night charging. If you put it on your office desk it and place your phone on it by ‘default’ when you are not using it – then it should keep charge levels fairly constant so you can walk away with at least the charge you came in with.

It only works in portrait mode, and you can charge through most third-party cases up to 3mm thickness. It seems grippy enough to support the iPhone securely.

Belkin’s magnetic charge pad is also 5W and performs similarly. Again, this is best used as a top-up charger overnight. We found the magnetic ‘clip’ a lot stronger than the Apple charger – that is good.

Its strength it that it is one of the few third-party induction chargers that work with Apple Watch – it is Apple MFi Certified.

The new dock is

Apologies to Belkin but it is hard to be enthusiastic over a $249.99 Qi iPhone charger and Apple Watch charger no matter how good it is – and it is. As an Apple accessory, it is fit for purpose and likely cheaper than the AirPower will ever be!

As an Apple iPhone QI charger and Apple Watch charger, it does exactly what it promises.

But I blame Apple for a) limiting the iPhone to a painfully slow 7.5W Qi charge and b) imposing costs like MFi certification to ensure the charger works. I suppose if it is for Apple then you don’t ask the price.