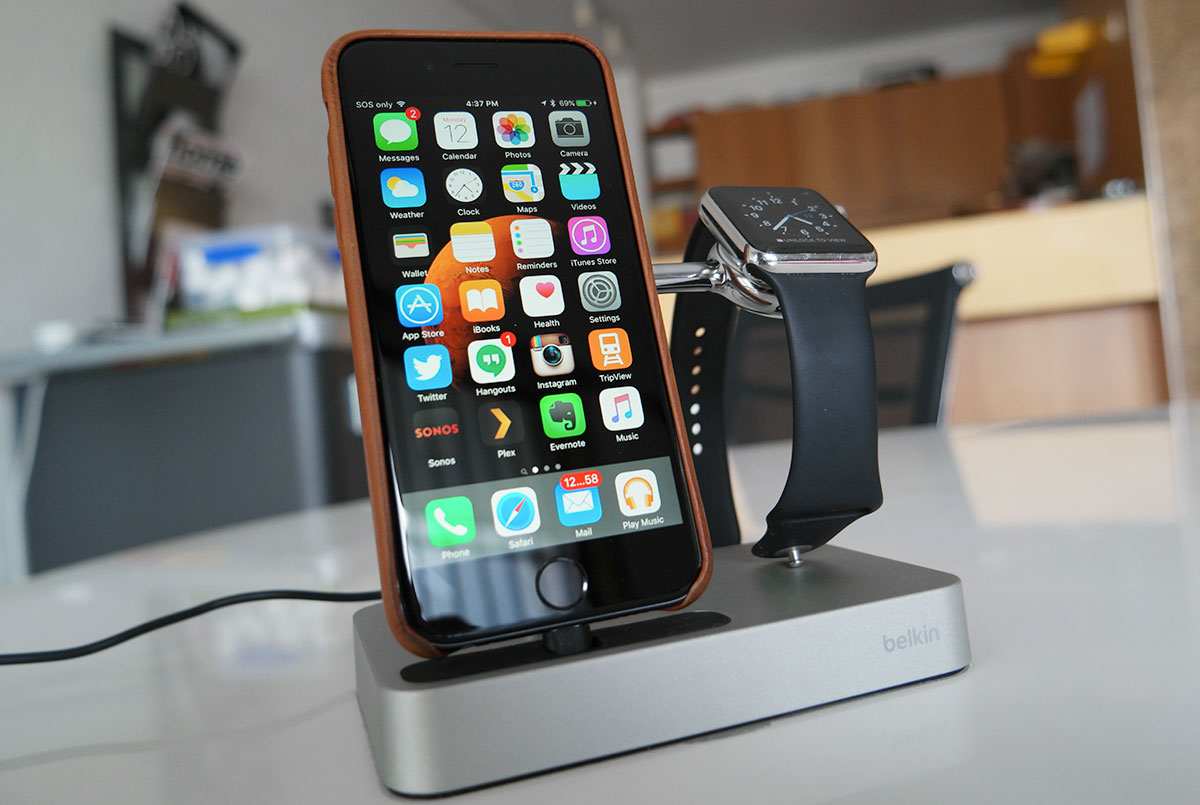 Recharging an iPhone and an Apple Watch is a two part issue for owners of both devices, but what if you could kill two birds with one stone?

Belkin’s latest gadget attempts to do just this, with the Charge Dock for Apple Watch and iPhone, a $190 combination of plastic, metal, and a cable that not only brings both the iPhone Lightning dock charger together with an Apple Watch charger, but arranges them neatly with the iPhone on the left and the Watch on the right.

First things first, there’s the build, and while it doesn’t offer the same brushed metal finish Apple products are known for — the chrome arm doesn’t exactly exude Apple’s brushed metal look Belkin is trying to go for with the base — but it still feels solid all the same.

There’s also only one cable, so if you’re taking up two spots on the wall adaptor or power strip and wish you could cycle it back to one, voila, because now you can.

Perhaps the most interesting part of the stand is the dial at the back of the dock which allows you to raise and lower the height of the Lightning dock. With a bit of play here, you’ll find you can provide a bit of wiggle room to iPhones in various cases, meaning you won’t have to take the case off to get your phone in the dock.

And that’s a good thing, because Belkin’s Charge Dock for the Apple Watch and iPhone does exactly what it says on the box, charging both devices with one cable, and even letting you keep the Apple Watch charger as a spare, since the charger of that watch is built directly into the unit and doesn’t rely on the one you received with the Watch, unlike other Apple Watch charging stands out there.

There are some catches to Belkin’s dock, however, and one of these is that the Watch doesn’t always sit nicely on the stand.

Maybe the magnet just isn’t strong enough, and maybe gravity doesn’t like us very much — come on gravity, you used to be cool — but you won’t always find the Apple Watch is sitting straight on the white magnetic charge block of the Belkin Charge Dock.

It orients itself a little to the left, and then sometimes to the right, making the pedants get out of their seat or reach a little longer to shift it back to the way it should be: straight, just like in the photos.

Belkin does include a little bit of plastic to help correct this, providing a bit of stability in white plastic which looks less like something Apple would produce than anything else in the package, but we suspect most people will just hang the watch over the charger like we have. It’s just easier that way.

If you prefer the phone on the right and the watch on the left, you can’t have that, either.

In theory, you could turn the entire dock around, but the metal for leaning the iPhone against and holding the watch is stuck in place with no way of shifting it at all.

Unfortunately, as good a charge dock as it is, you are stuck with the phone on the left and the watch on the right, with no sense of modularity.

The last problem with Belkin’s Charge Dock for the iPhone and Apple Watch is one that isn’t so much a problem but rather a concern, and it’s price, because with a recommended retail price of $189.95, Belkin’s dock is no cheap purchase.

When you separate them, and if you have neither, the price isn’t a total travesty, but rather just more than you might initially pay, simply because Apple’s iPhone dock comes in at $75 while a magnetic Watch charger is another $45 locally, and this is both of those things built into one unit.

But we still have troubles with almost $200 for a charger because if you have the devices necessary for this product, you already have the chargers, too.

This is just doubling up in a nice package.

There aren’t many options for charging an Apple Watch out there, and most Apple Watch owners have to turn to the charger that came in the box, and if they want it to look a little snazzy — or snazzier than the basic cable you get — have to turn to a stand that doesn’t do much more than hold your charger in place.

Belkin’s Charge Dock gets around this and does it with a level of build quality Apple customers have come to expect out of Apple products, which is a touch surprising for Belkin. Sure, we’ve seen some quality gear from Belkin in the past, but not to this extent, and not feeling like the tank that this charger is.

If you know someone who loves their Apple Watch and are shopping for the right gift, Belkin’s Charge Dock does fill a gap, and it might even make their desk or nightstand look a little neater.

Overall
Reader Rating0 Votes
Very well built; One cable for two devices; Height of the iPhone charge port can be set, making it useful for iPhones in cases;
Expensive; Watch doesn’t always balance nicely on the stand; No way to make the watch sit on the left side of the phone;
4