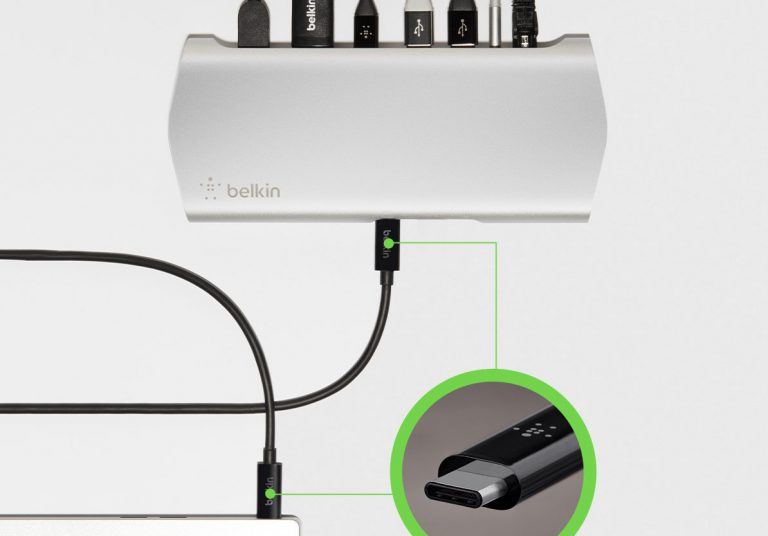 Everything in the world of consumer information technology is converging on USB Type-C. And now Belkin has a new dock out which uses USB Type-C connectors, and USB 3.1 technology, to open up devices to broad, powerful connectivity.

I shall be describing Belkin’s exciting new Dock shortly, but first let’s clear up what we’re talking about with USB.

The first thing to remember is that USB Type-C and USB 3.1 are not the same thing.

Since its inception and until recently, USB used the flat Type-A plug and socket for one end, and the squarish Type-B plug and socket on the other end, although that was sometimes replaced with one of several “Mini” or “Micro” versions. Most commonly, the Micro-B USB socket was fitted to Android phones, and still is to many.

The USB Type-C uses the same plug and socket on both ends. If that isn’t convenient enough, they are reversible. That is, like Apple’s Lightning connector, the plug can go in either way around. That might seem like a small thing, but it’s a surprisingly useful time – and frustration – saver for the consumer. All USB previous connectors have not only had to be the right way around, but they had to be pretty much perfectly aligned to get the plug into the socket. USB Type-C plugs and sockets are physically tolerant.

USB 3.1 is the latest version of a communications standard that’s over twenty years old (USB stands for Universal Serial Bus). And while it started pretty much locked into the Type-A and Type B connections, these days it refers to the data formats, not the physical wires. So USB 3.1 can be and often is still implemented on those older connections (USB 3.0 is usually coloured blue, and USB 3.1 is sometimes blue, sometimes red, for ready identification), but now frequently appears on devices using USB Type-C connectors.

But just because a device has a USB Type-C connector, that doesn’t mean it supports USB 3.1. Some of the early Android phones with USB Type-C, rather than Micro-B USB, sockets still only supported USB 2.0 data transfers.

What USB 3.1 offers is higher speed. The first widely used version of USB was USB 1.1, which is coming up for its twentieth anniversary next year. It supported transfer speeds of 12 megabits per second. USB 2.0, which is what most of us have been living with this past decade or more, pushed that up to a notional 480Mbps, but in practice closer to 280Mbps. That proved fine for connecting printers and keyboards and the modestly size flash drives of the day.

But as drives got bigger, and more and more devices were attached, higher throughput was needed. USB 3.0 increased the speeds by ten times, to 5Gbps notionally, 3.2Gbps to 4.0Gbps in practice. USB 3.1 doubles those again to 10Gbps and actual figures of 7.2Gbps or better.

(USB 3.2 has been proposed, but not yet made available. That’ll double everything again.)

With all that under our belt, we can see what Belkin’s new USB-C 3.1 Express Dock HD has to offer. It’s a slim, flat device, only a bit over 3cm tall and 8cm deep. On its front it has a USB Type-C port (this supports USB 3.1), a USB Type-A port and a 3.5mm audio port (this supports both input and output, so it can be used with a headset). Typically you’ll plug this USB Type-C connection to your computer using the included USB Type-C cable. If it charges via USB Type-C – see the Apple MacBook Pro, for example, or the HP EliteBook X350 – this cable both feeds power to the computer and carries data between the computer and the dock.

On the back is another USB Type-C connector, two more USB Type-A connectors, an analogue audio output, a HDMI output and a gigabit Ethernet connection.

In other words, all you need to full expand your USB Type-C equipped notebook. You can leave the dock connected to a mouse and keyboard, desktop speakers, and Ethernet so you connect to your local network at up to a thousand megabits per second, instead of the few hundred the WiFi in your vicinity might permit. And, of course, you’ll have a proper monitor plugged in. The dock supports up to 4K over HDMI.

The dock will power all the various USB devices plugged into it. It can provide a total of sixty watts, and it monitors all the ports and dynamically changes the power it provides according to needs.

The Belkin USB-C 3.1 Express Dock HD is available now from Belkin.com as well as Harvey Norman and other retailers of Belkin’s wide range of USB Type-C accessories. It sells for $369.95.