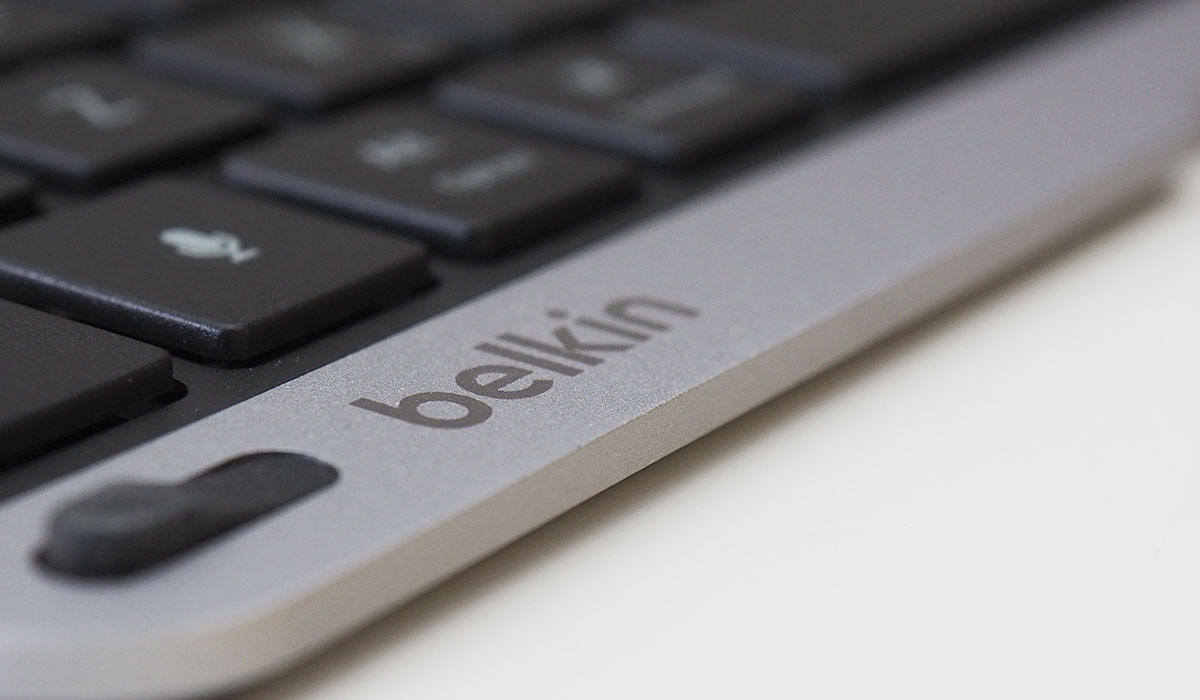 How slim can an iPad keyboard get? Belkin’s Thin Type Keyboard Case takes its QODE keyboard design and applies it to a keyboard case that measures only 4mm thick. Is that enough to make a comfortable typing experience, or would you be better of with something else?

We’ve seen quite a few keyboard cases arrive on our review desk meant for Apple’s hugely successful tablet, the iPad, and in the Thin Type, we’re seeing yet another, as Belkin attempts to catch the eye of people looking to keep their tablet thin and friendly, while offer them a keyboard that is both comfortable to use and slim enough that it won’t attract a lot of attention.

Does the combination work?

Take the Belkin Thin Type out of the box and it’s easy to see what Belkin is going for in its design.

In fact, if you have a space grey iPad, it is especially easy as the designs work perfectly together, with Belkin going with the space grey aluminium look itself, accented by the odd bit of black plastic along the bottom because, well, you need to store the battery somewhere, and we suspect that’s where Belkin has chosen.

Beyond that bit of black plastic, though, it’s an aluminium slate with a plastic keyboard along the inside and a magnetic aluminium hinge, designed to work with the leftover magnets used in the iPad design.

Now if you know the iPad well, you’ll remember that Apple first brought magnets to the iPad with the second-generation model, made not just for the smart cover switch — which allows the screen to switch on and off depending on if it was covered or not — but also to keep the smart covers in position, with a super-strong magnet that could hold the iPad up by just the case itself.

It was super handy and easily one of Apple’s best inclusions, but since the iPad underwent a design change to the “Air” style, the magnets have taken a backseat.

They’re still there, but not really used for the case design, as iPad Air and Air 2 cases tend to wrap around the tablet completely, rather than attaching via the magnetic edge like they did before.

And yet, that’s exactly what the Thin Type wants to do: it wants to connect to an iPad Air and iPad Air 2 using that magnetic edge, a feature that is still there, but very underused.

Take out the iPad and you’ll find you can do just that, the magnetic hinge on the keyboard springing to life with the right edge, which is actually the left edge, specifically when the iPad home button is found on the right side in landscape view.

When connected, you can close the keyboard simply by collapsing the iPad into the keyboard just like you’d expect with an older case, so that works. Just don’t try to fold the keyboard around the side of the iPad Air, as the hinge won’t allow it, and it is far far easier to remove the iPad and hold it removed from the case.

So it works as a case, or it does sort of.

There’s no protection offered by the case, and really, you’re connecting a bare iPad Air to the case, so just be aware when you’re holding the iPad in the Thin Type because the last thing you’d want to do is drop what’s being held.

Then there’s the keyboard, and while Belkin has a history of applying magnets to some of its cases, this one lacks that feature, simply providing a cavity or trench for your iPad Air and giving you one position for it.

Place the iPad Air in this trend and the keyboard will switch on, likely being awoken by the magnets in the tablet design sending a message that a tablet is being loaded in place and it is now time to wake up.

When you do that, you simply need to pair the keyboard to the tablet and you’re good to go, which is relatively easy thanks to the “pair” button found on the top right, with the iOS Bluetooth settings being the other part of this step.

Once that’s done, you’re good to go, and if you’re ready to type in an app, the physical keyboard will replace the onscreen keyboard, meaning you can type using the physical keys provided to you by Belkin.

Start typing and you’ll find that the keys are a little smaller than their full-size keyboard equivalent, which is hardly a surprise given the 9.7 inch size of the iPad, and that this has to measure up to the screen size in total.

That said, despite the keys being smaller, the island-key style keyboard offers enough travel for most users, with a good clicking sound as you type on the keyboard and just the right amount of spring to keep you typing without stopping.

But while we find the keys comfortable to press, Belkin’s tendency to move keys around is still evident from what we saw on the Ultimate Keyboard Case last year, and while the semi-colon and colon key normally sits next to the “L” key, the placement of this one throws it down to next to the space bar, a little unorthodox and frustrating if you tend to use that form of punctuation repeatedly.

Further, with the quote keeping its original spot and yet keeping the enter key long, you might accidentally press the latter when you meant the former, resulting in plenty of chances to re-read what you wrote and edit, edit, edit, seeing lots of carriage returns with broken phrases every time you wanted to add an apostrophe or a quotation mark.

Fun, fun, but not exactly the sort we had in mind.

You may also find the odd character lost as you type, and we found our experience yielded closer to one lost letter every 400 or 500, a result that isn’t terrible, and could come down to us being a little too fast for the keyboard.

Belkin’s — agh, we did it again with that apostrophe — other flaw in the design of the keyboard is the magnetic hinge, which just feels like it needs to be used a little differently.

For instance, while you can hold the Thin Type keyboard case using the iPad Air and the opposite, we wouldn’t, as neither feel particularly strong enough to do it for too long.

But that’s not the real issue, and it’s the lack of a magnet in the iPad Air trench that bothers us, meaning the tablet just sits there against the edge, not held in place by anything.

On a bus, train, aeroplane, or anything else moving, this means a huge bump or shift can cause the iPad Air to jump forward, or with the right push, totally out of the trench, something a magnet might have stabilised.

Belkin’s Thin Type sets out to do a few things with its Air and Air 2 compatible keyboard.

For one thing, it aims to make it possible to bring a thin and stylish keyboard to the table, something that matches your equally thin and stylish Apple tablet, achieving this aim with flying colours.

But it also unfortunately forces you to rethink the way you type on a keyboard, and if you’re used to a full-size keyboard — or pretty much any keyboard, for that matter — this slight design change can have a huge impact, introducing numerous errors every time you reach for an apostrope, a quote, a colon, or a semi-colon

Punctuation is one of those things you shouldn’t mess with, and unfortunately Belkin has, making this a keyboard that typical computer users will likely see errors spill over into.

If that doesn’t bother you, it’s not a bad little keyboard to have, but we’d probably spend the extra few bucks and upgrade to the model with the plastic case built in. Sure, it doesn’t look as good and dents the metal style of the iPad Air 2, but at least it won’t afford you the change to fall out of the case if you grab it the wrong way.

Overall
Features
Value for money
Performance
Ease of Use
Design
Reader Rating0 Votes
Easy to snap in; Keys are relatively comfortable to type on; Coloured to match the space grey iPad (though this could be a con if you have a different style); Durable with an aluminium design; Like all Bluetooth keyboard cases, charges though microUSB;
Some keys have been moved around, and this tends to make you mistype or add extra carriage returns; Magnets won't hold the casing in place when being used with the keyboard; iPad can slip out of the magnet connection when closed; Only available in space grey, which means it won’t look as good with other colours;
3.6