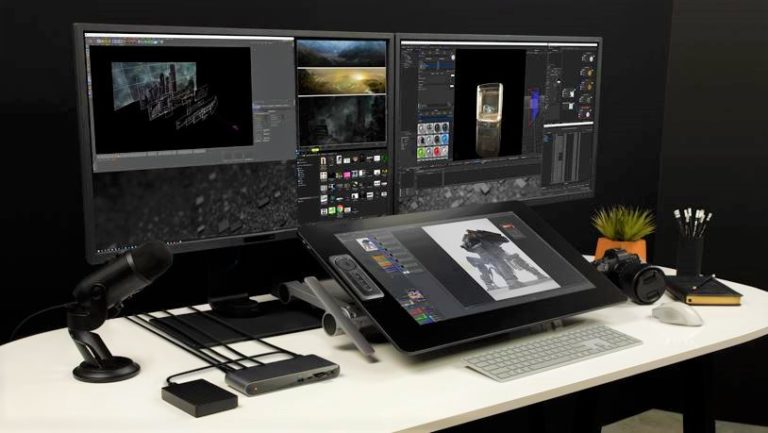 Unlike all earlier docks, Intel Titan Ridge enables a downstream Thunderbolt 3 port for daisy-chained devices. Oh, and it has 85W PD upstream charging.

All provide downstream power to a maximum total of 5V/3A/15W for connected devices like portable SSDs etc.

Absolutely everything goes up and down that single TB3 ‘pipe’. The pipe segments into

For example, the higher the monitor resolution, the more bandwidth it takes. 4K@60Hz uses around 8-22Gbps, 8K@30Hz is about 18-22Gbps. Speeds are reliant on refresh rate, colour depth etc.

As the pipe gets congested it may start to compress data, drop frame refresh rates etc. So, no Dock can power everything at maximum speeds. Still, Titan Ridge-based ones are intelligent enough to do things like time-slice resources and distribute data most efficiently over those four PCIe lanes.

Techy types can read more here (it is a PDF so check downloads).

What is Intel Titan Ridge Thunderbolt 3?

Belkin Thunderbolt 3 Dock Pro uses an Intel Titan Ridge JHL 7440 chip. Compared to previous Thunderbolt chips it adds one downstream Thunderbolt 3 port and support for two DisplayPort (DP 1.4) streams as part of the 40Gbps. But that is only part of what it does.

Before you get excited, remember that you only have the original bandwidth to share.

The only other Titan Ridge dock we have reviewed is the Plugable TBT3-UDC1 here, and it scored 4.9/5. As all Titan Ridge docks perform similarly, you can look forward to this doing the same.

But there may be a catch. The maximum speed requires that monitors support High Bit Rate 3 (HBR3) and as far as we are aware, there are very few compatible monitors.

If you have High Bit Rate 2 (HBR2) monitors and video cards (most likely), you will not achieve maximum speeds. So, if a 5K monitor is what you need or 2x4K@60Hz, you may need to check if it works first.

Please note that the ports specifications are not clear in the documentation, and we have reported on what we can test.

20V/8.5A/170W. It supports up to 85W upstream charging. It is not Apple MFi certified but works with Mac and Windows devices to 85W.

These are pass through voltage and amperage under load

We note that on the US Amazon site that it may not be entirely compatible with MacBook Pro (Apple site here). Issues include not waking up monitors, overheating and loss of LAN. We were unable to test on a MacBook Pro, but it is unlike Belkin to release a faulty product, and later reviews reflect increasing satisfaction.

In all our tests in Windows, it worked flawlessly. The only minor inconvenience is tying up the second Thunderbolt 3 port with a Thunderbolt 3 (or USB-C) monitor. The Plugable mentioned earlier has dual DisplayPort 1.4 opting to use the bandwidth for an extra port instead of a downstream Thunderbolt 3 port.

Windows – perfect. I suspect any issues with Mac could have been user-related – probably the wrong cables (there is a difference between USB-C and Thunderbolt 3 even though they look the same).

Regardless it is a great dock and one that, under Australian Consumer Law, you can take back if it has issues for you. Belkin is a highly reputable company and will try to help. Support is from the Central Coast of NSW.

The Intel Titian Ridge chipset is now in several docks. If there are Mac issues, it will apply to all dock brands.

At the beginning of this review, I mentioned the Plugable was rated 4.9/5, and this uses similar Intel Titan Ridge technology. The key difference is that the Plugable has as two dedicated DP Ports sacrificing the downstream TB3 port. For many that is probably a more convenient setup and it still has USB-C 3.1 Gen 2 (10Gbps) ports that cover the fastest external SSD devices.

But Belkin elected to use that port for TB3 downstream, so if you need that, then it is for you. Otherwise, both score 4.9/5.