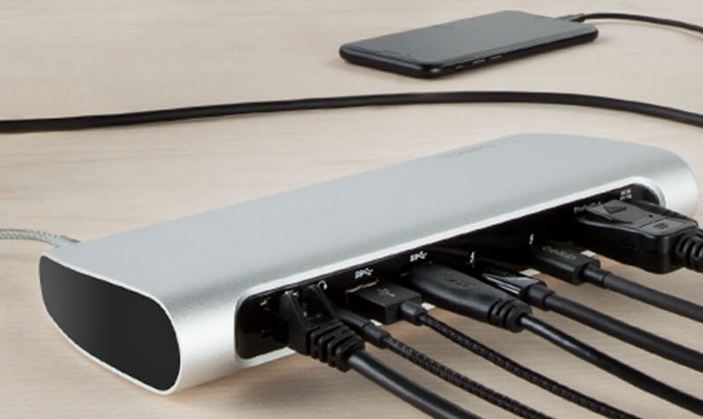 The Belkin Thunderbolt 3 Express Dock is a must have for MacBook Pro owners with Thunderbolt 3 ports.Thunderbolt 3 is the way to the future allows both Mac and PC to have smaller, lighter and thinner laptops. The only problem is that many laptops now only have Thunderbolt 3 ports forcing owners to carry a menagerie of dongles and adaptors.

We say for Mac because it tested flawlessly with both the MacBook Pro 13 and 15” models.

We had issues using it on a Windows HP EliteBook x360 1030 G2 where error messages about power charging and driver issues stymied us. In any case the fine print on the website states, ‘The Thunderbolt 3 Express Dock HD is not PC compatible.” D’oh!

It follows the brushed aluminium style of its previous docks. It looks good on any desk as most of the ports are on the rear. One USB-A and 3.5mm audio are on the front for convenience.

The first thing we noticed was the 1m long ‘passive’ Thunderbolt 3 cable supplied. Other docks use a passive .5m cable.

A good overview of Thunderbolt 3 is here. here. After reading about it that is all you will want for your next computer.

According to Thunderbolt 3 specifications, the .5m passive USB-C cable that comes with most docks provides

Belkin provides a 1m 60W/20Gb/s F2CD081 cable for convenience. Those .5m cables are often just a little too short for easy placement. My only gripe is that it should have included a .5m cable as well.

So, if you need 85W/40Gb/s performance go back to a .5m passive cable. Or fork out somewhere north of $100 for an active 2m F2CD083 cable that uses fibre optics and has an integrated controller chip. This is a not a USB-C substitute cable.

How to connect monitors

USB-C/Thunderbolt 3 standard assumes that all graphics processing is via the host computer.

How to connect a single up to 5K monitor

The Dock’s full-sized DisplayPort 1.2 supports sound and video up to 5K. You can get DisplayPort to HDMI/VGA/DVI adapters.

The first monitor connects to the dock’s DisplayPort. The second uses a USB-C/Thunderbolt 3 cable to a Thunderbolt 3 compatible monitor.

Or use a USB-A 3.0 to DisplayPort 4K adaptor that works well from any of the dock’s USB-A ports but adds $106.99 plus freight to the cost.

Ethernet was a rock solid 1Gb/s.

It was difficult to test the 40Gb/s (5,000 MB/s) Thunderbolt 3 claim. Attaching a Samsung T3, 1TB, SSD drive gave an amazing and consistent write speed of 400MB/s (the theoretical maximum rate is 450MB/s), so all I can surmise is that the port is very fast.

I have tested many docks over the years, and apart from odd driver issues that are usually promptly fixed they all work flawlessly.

I have been testing various Thunderbolt powered and unpowered docks on both Mac and Windows. This works well on Mac.

• Very large 170W power brick weighs as much as the dock
• Would have liked an HDMI port but realise the Thunderbolt 3 standard does not support this
• Need to supply a .5m cable as well
• No Apple specific ports link Thunderbolt 2, S/PDIF digital audio port, Firewire 800 or Lightning

As a MacBook dock.

A$529.95. Any typical MacBook owner should consider this especially as you can find amazing online bargains from about $450.