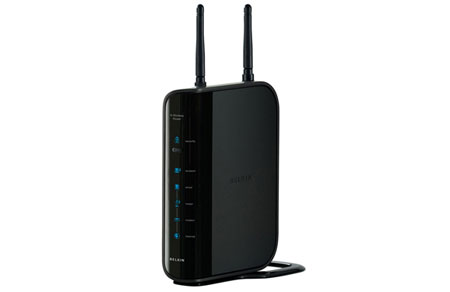 Not so many years ago, running a router on your home network meant dedicating an entire PC to the task. Splitting an internet link to multiple PCs was no trivial thing, and besides a spare computer, you also needed strong geek-fu.

Today, getting multiple PCs on the one internet connection is as simple as buying something like this: a self-contained box with no moving parts, so robust the manufacturer even backs it with a lifetime warranty.

Many routers today come with a whole host of bells and whistles: onboard ADSL2+ modem, USB ports, voice-over-IP telephone jacks – you name it. The Wireless N (or F5D8236au4 – a part number you may need to quote to get this exact router since the name is so generic) is a back-to-basics box that does very little besides split your net connection across wireless or Ethernet.

The main feature is of course 802.11n draft 2 wireless. This newest of protocols offers speeds of up to 300Mbps – nearly 100 times faster than the average internet connection.

Unfortunately this won’t affect your web browsing. The faster speeds only apply when moving files from PC to PC across your own network, and you only get 300Mbps if the PCs are equipped with 802.11n wireless cards.

Still, for big music or video connections, this kind of wireless speed is excellent: better than traditional 100Mbps wired Ethernet, and beaten only 1000Mbps gigabit Ethernet. Which, oddly, this router doesn’t offer on its four wired ports.

As mentioned, this router is all about simplicity. You need a separate modem – usually provided by your ISP anyway – and there’s a handy wizard CD in the box. More experienced geeks will use the router’s own web address to manually configure the network just the way they like it.

It’s not quite plug and play, but it’s very close.

The interesting performance statistics here are over wireless: the Ethernet ports in the back are just standard 100Mbps.

We had a couple of 802.11n wireless adaptors kicking around and tried out the router with these. Using 802.11n, shifting files across the network was indeed very swift – thought the 300Mbps top speed is just theoretical and we rarely went much over 100Mbps.

Still, this brings wireless up to par with traditional Ethernet… which would be great except we moved to gigabit wired networking a couple of years ago.
Range is excellent: we wandered around the house and out to the garage with a netbook with a USB 802.11n adapter, and experienced no loss of signal.

This kind of bandwidth is more than enough for compressed video and audio files, and even enough for today’s Blu-ray movies.

The Wirless N is a basic little router indeed, but its price reflects that. You set it up, and start using it. That’s about it.

It’s refreshing in a world of over-specced magic networking boxes, but even so there are a couple of things we missed. You can’t connect a USB or networked hard drive directly to the router, which is disappointing. You’d think at this price point there’d be enough margin for the cheap-as-chips chip to control network attached storage.

One other quirk: most routers these days come with a stand so you can set up the router vertically. On the Wireless N the stand is permanently fixed to the base: you can’t lie this router down. An odd lack of flexibility from Belkin, here.

If you don’t want your router to dominate your house (and who does?) and groovy LCD displays and support for telephones leaves you cold, then the Wireless N could prove a handy – and long-lasting – hub for your home network.