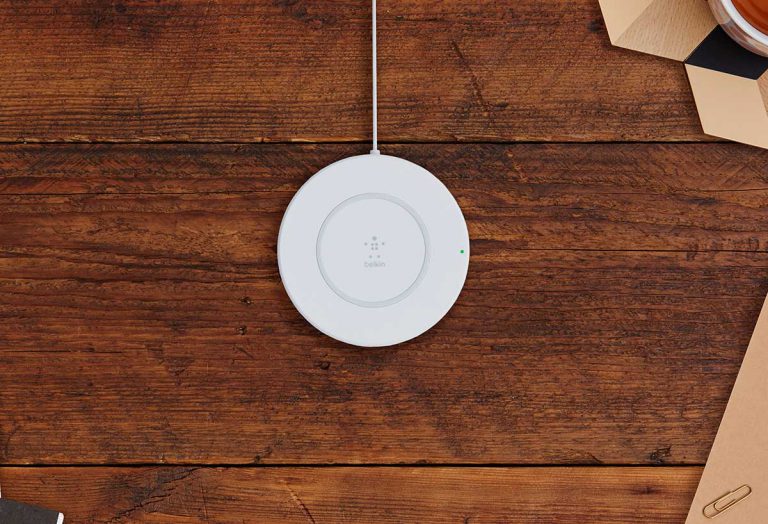 The accessories flow quick and fast. There will be cases galore, but Belkin already has a new charging pad designed for the just-announced iPhone 8, iPhone 8 Plus and iPhone X.

The wireless charging capability is one of the more significant – arguably overdue – changes with the new iPhones. Belkin has a tailored solution out – available from Friday this week – to charge up your new iPhone X, 8 or 8 Plus.

The Belkin Boost-Up Wireless Charging Pad for iPhone 8, iPhone 8 Plus and iPhone X is a simple circular device, finished in white as is the norm for many iPhone accessories. You plug it into a power point, put your new phone on it, note that the indicator light has illuminated, and then just let it charge. It couldn’t be easier. We reviewed the Belkin model for Android phones a few months ago, and were impressed.

The phone continues to work while it’s charging. If it rings, just pick it up and you’re right to go. When you put it back, the indicator light gives positive assurance that the phone is actually charging. The device works through cases up to 3mm thick.

This model runs at up to 7.5 watts (the earlier model could manage fifteen watts). Belkin notes for the new device: “Charging levels optimised up to 7.5W for compatible devices”. I’m figuring that this is a requirement of Apple. Too much power can lead to overheating.

Belkin includes a “Connected Equipment Warranty” of up to $2500, should something go wrong. Unlikely, though. Wireless charging has been used for years with few if any reported problems.

The Qi standard seems to be the most popular, supported by Samsung phones amongst others. Indeed, while tagged for the various iPhones, this Belkin charger will work with Samsung, Motorola and other Qi-compatible smart phones.

The Qi system basically uses an inductive coil in the pad which runs a strong current. That generates a sympathetic current in a coil in the phone. The inclusion of that coil is why the new iPhone 8 and iPhone 8 Plus are 0.2mm thicker and a few grams heavier than their predecessors.

Seem odd, perhaps, that much power could be transferred this way? Basically, the principle is the same as that in an inductive cooktop. Except in that, the generated current swirls around, generating heat. In the phone, almost all of it is guided to charging the battery.

There are significant smarts involved to avoid overcharging, switching on only when a compatible phone is detected and so on.

The Belkin Boost-Up Wireless Charging Pad for iPhone 8, iPhone 8 Plus and iPhone X will be available from the day after tomorrow from Apple and Belkin for $99.95.