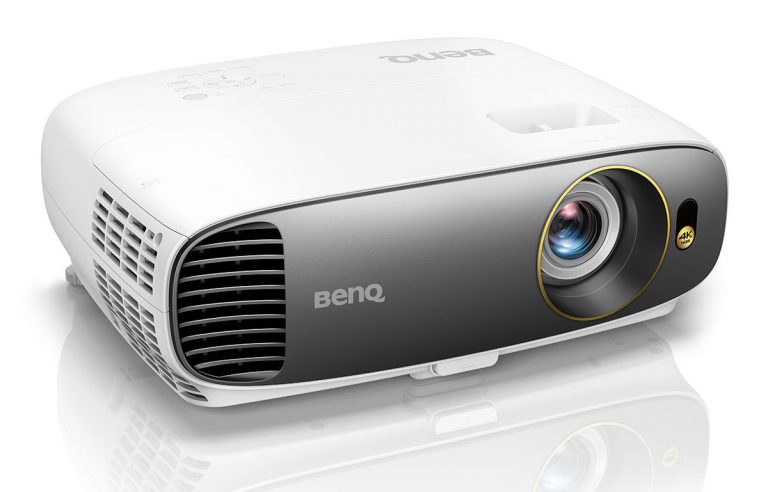 UltraHD, if it’s for anything at all, it is surely for the big screen. Which means projection screens. Yet, go back a couple of years and there was only one vendor of home theatre projectors capable of delivering UltraHD, and they were priced from around $15,000 to $100,000.* But since then BenQ has entered the market, with inaugural pricing of its W11000 at just under $8000. And now …

How about $2499? That’s the price of the new BenQ W1700 4K UHD DLP Home Cinema projector. That’s by far the least expensive way to get a huge UltraHD image in your home. BenQ rates the projector as suitable for screens from 60 inches to 200 inches. In Australian, that’s from 1.52 metres to a touch over five metres.

The technology BenQ uses in its projectors is DLP, which stands for Digital Light Projector. What that really means is that rather than passing the light through, or bouncing it off, small LCD panels, it uses a chip covered with tiny mirrors and bounces the light from them. It’s called a Digital Micromirror Device.

Each of those tiny mirrors – and remember,  there are millions of them on a DMD, arranged in a grid – has a hinge at one end and physically swings through a 12 degree arc at a thousand times per second. In one position the light from the lamp is reflected by the mirror out through the lens. In the other it’s directed into a kind of light dump.

LCD projectors normally use three LCD panels: one each for red, green and blue. Home theatre DLP projectors only use one rather than three. Why? I suspect that it was because the technology was very expensive when first implemented, and now it has just become “the way it’s done”. There are some very high end models which use three chips.

To achieve colour, then, the three colours are displayed in sequence. Because the DMD can flip its mirrors so very fast, this is viable in a way that couldn’t be done with LCD. The lamp light is coloured by running it through a spinning “colour wheel” with red, green and blue filters, all synchronised with the chip itself to provide the right colours at the right times.

I’ll talk more in a second about the UltraHD side of things, because it’s uncertain precisely how this is achieved with this projector. But first …

It supports HDR – High Dynamic Range – and implements the HDCP copy protection system so that it will work with UltraHD Blu-ray players. BenQ says that it delivers 96% of the Rec.709 colour gamut. (Rec.709 is the colour standard used for high definition systems.)

The lamp is rated at 4000 hours of operation in normal mode, and up to 15000 hours in various lower output modes.

How many millions pixels?

So let’s get back to UltraHD. BenQ’s previous W11000 and premium X12000 UltraHD projectors use a different DMD to this one. Theirs is a 0.67 inch unit and although UHD requires 8.3 megapixels, it only packs 4.15 megapixels. The native resolution of that DMD is 2716 by 1528 pixels. It increases this to the full 8.3 megapixels by using something called XPR technology, which shifts the pixels rapidly the tiniest amount between two different positions, thus creating two pixels for one, or the full 8.3 megapixels.

Does that actually work? Indeed it does. I’ve looked very closely at test patterns of my own design on both those projectors, and they do resolve the image all the way down to the UltraHD pixels.

It seems to me that there are three possible understandings of this. And, yes, I have queries in to see if we can find out.

One: the new DMD has 8.3 million mirrors. That seems unlikely, since such a game changer in this tech space would be shouted very loudly, and would most likely first appear in a much more expensive product.

Two: a new, smaller 4.15 megapixel chip has been developed. If that’s the case, then I guess one could hope for a full 8.3 megapixel chip soon, because by retaining the same mirror size, that resolution could be packed into a 0.67 inch DMD.

Three: perhaps a lower resolution chip – 1080p maybe? – is being used with an enhanced version of XPR technology which shifts the output to four positions rather than just two.

I’m not prepared to take a guess at which it is, but if I get useful information back from my queries, I will update this article.

UPDATE: I’m advised by BenQ that option three above is correct: “The W1700 uses a 1080p chip with 4x pixel shifting technology.” This graphic was supplied:

* Yes, that’s right. Expensive, huh? We shouldn’t be surprised. A decade or so ago when the first full HD projectors appeared, they were priced at $40,000!