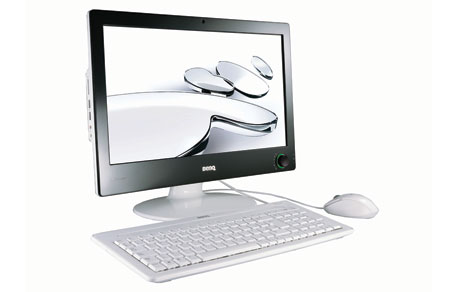 Now the netbook has spawned the nettop. Exactly the same hardware, but attached to a bigger screen. The result is a PC without much grunt, but with a tiny footprint. It’s like an iMac, but at a fraction of the cost.

Only one question remains: is this nettop from BenQ cheap enough?

The machine itself is, thanks to its netbook heritage, low powered indeed. The 1.5GHz AMD Sempron processor combined with Radeon X1200 graphics won’t do you much good if you want to play games, but for the web and standard-definition video, it’s just fine.

The nScreen targets the non-techy user and even has a “senior mode” which boosts audio from the 2W speakers.

Windows XP is a good choice here, as it provides all the functionality a simple machine needs, without the performance overheads of Vista.

BenQ ships the machine with a matched keyboard and mouse, but these are plasticky and basic – but an extra $100 or so will buy you an excellent wireless combo from Logitech or similar.

Six USB2.0 ports is generous (netbooks usually only have three) so you can hook up your camera, printer, or whatever. There’s an SD memory card reader, too.

The nScreen won’t break benchmark records, and it would be all too easy to trash it for this reason. But then, it’s not trying to be a power machine in any way. It’s job is to sit demurely in the corner and give you quick and painless access to the web.

That said, it’s actually a capable little music machine (if you attach extra speakers or a USB amplifier) and will play video no problem. HD at 1080p is beyond it, but that’s fine because the display only has enough resolution for 720p.

The onboard wireless adapter makes it a doddle to get on the home network, though there’s an Ethernet port too.

Like a netbook, the nScreen has an onboard webcam. Since it comes pre-installed with Skype (though not version 4, unfortunately, so you will need to upgrade), you can have it up and running as a videophone moments after getting it out of the box.

It’s a simple machine, and good at simple tasks. As long as you don’t expect it to crunch too many numbers or play games – indeed, as long as you use it for one thing at a time – it makes an ideal secondary PC.

The only real problem with the nScreen is the price. For $900, you can buy a desktop PC using the compact microATX form factor and a 22″ LCD monitor that runs at 1680 x 1050.

Yes, that machine will have a small separate box and thus a larger footprint, but it will also have 2GB of RAM and an optical drive for playing and burning DVDs.

A microATX machine is also easy to upgrade. And this isn’t.

But then, with the nScreen you’re not really paying for pure spec. You’re paying for convenience, a seriously tiny footprint, and you do get a few notebook niceties (1.3MP webcam, tiny 65W power draw) in a desktop form.