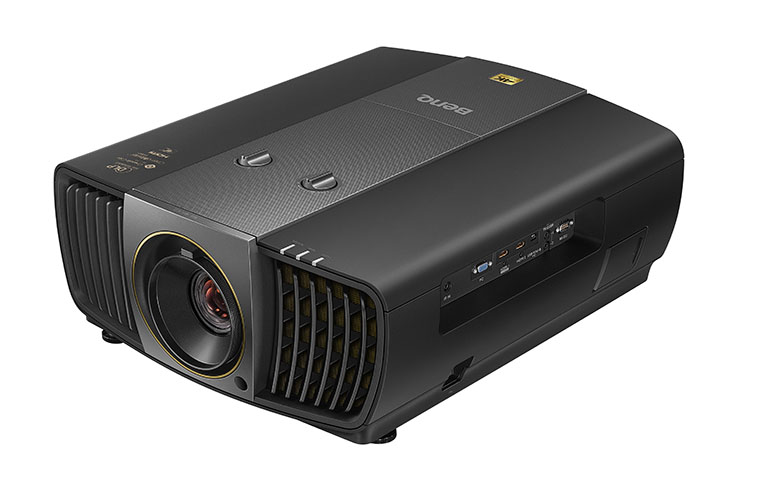 One of the weird things about UltraHD picture resolution is that it appeared first in TVs, and even now after several years it has until recently only been available in front projectors – where the benefits of higher resolution would be most apparent – in extremely expensive models.

That changed last year when the relatively affordable BenQ W11000 UltraHD projector ($7999) was released. Now BenQ has upped the game with the BenQ X12000. Using new LED technology, this moves beyond older colour standards to the Digital Cinema Initiative P3 colour standard. And at $9999, it is startlingly low in price, given the starting price points of the competition in UltraHD projection. (Don’t believe me? Once LED-powered UHD projector sells for verging on a hundred thousand dollars!)

Whereas the BenQ W11000 uses conventional lamp technology, the light source used by the BenQ X12000 are Philips ColorSpark HLD LEDs. Released only towards the end of 2015, these LEDs solve the problem of insufficient LED brightness in some colours. While red and blue LEDs have been fine, green has been difficult to manage. The solution is to use a powerful blue LED and focus its light on phosphorous elements designed to fluoresce in the sought colour when so stimulated.

The Philips ColorSpark High Lumen Density apparently improves the power of this solution by increasing the focus and density of the light source significantly, improving what in optics is called the “etendue”, which is the property of a light source describing how small the source is and the rate at which it spreads.

LEDs are generally a significant improvement over regular lamps by reason of being relatively cool running, coming instantly on and off, requiring no cool-down fan when switched off and … well, this will require a new paragraph.

In general, they are more efficient because the light is generated in the needed blue, green and red wavelengths, eliminating the need for filters which simply throw away a lot of the generated light. They are also more precise because of the wavelengths of the light they produce are well known and tightly clustered, instead of being across a relatively broad spectrum, making it easier to achieve the correct colour mix.

BenQ says that the X12000 projector can produce 95% of the colours of the advanced DCI-P3 standard.

Apart from the light source, the Ultra High Definition technology is similar to that in the W11000. A 4.15 megapixel digital micromirror device – it has a grid of 2716 by 1528 tiny mirrors on its surface that move individually perhaps a thousand times a second to control the light – is fitted with XPR technology from Texas Instruments to shift the image slightly to create all 8.3 megapixels of UHD.

This is different than the Full HD projectors which also employ pixel shifting technology. In my experience, those add little to nothing to the picture compared to plain Full HD. I’ve closely examined the W11000’s picture quality, and it is clearly capable of producing very single pixel in an UltraHD image. I expect the Z11000 will be just as good.

The projector is large and heavy (18.5 kilograms), as befits a premium projector. It has various system integration features and of course receives its signal via HDMI (it supports the latest “HDCP” content projection scheme so it’ll work with UltraHD Blu-ray). A 1.5:1 zoom lens and lens shift capabilities make installation position fairly flexible. The projector is rated at 2200 ANSI Lumens output and a contrast ratio of 50,000:1.

One other advantage of a LED light source over a lamp: instead of the four or five thousand hour lamp rating of a conventional projector, the BenQ X12000’s is rated for up to 20,000 hours of operation. That’s four hours of viewing a day, every day for more than thirteen years.