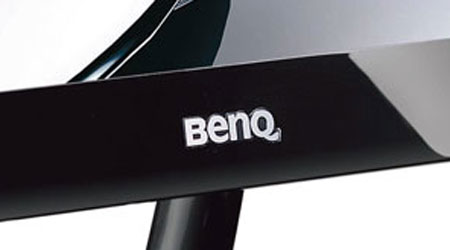 A 24 inch LCD monitor offering 1920 x 1080 full HD resolution, there’s a lot to like about the Benq V2420H. At 1.8cm, it’s super thin and, with its sleek angles and high-gloss back bezel, easy on the eye. Others were impressed by its design too, with Germany’s International Forum Design committee awarding it an iF Product Design Award for 2010.

Of course, while the monitor is just 1.8cm at it thinnest point, it sits atop a circular baseplate with an 18 cm diameter. Still, this won’t take up a lot of real estate on your desktop.

At the bottom of the screen sit the controls, with the power button a simple glowing ring located at the right-hand corner. Menu controls are found below this, in the form of miniscule little buttons on the underside of the bezel. Most of the adjustments you’d want are provided when you drill down into the menus, with volume, input, mode selection enabled directly from the physical controls.

With D-sub (VGA), DVI-D, and HDMI on offer, Benq has equipped the V2420H with enough ports to allow an easy marriage with any computer, as well as digital video sources such as games consoles, Blu-ray and DVD players and high definition set-top boxes. Older equipment with analog video connections will go begging however, as there are no composite or component video inputs.

Lacking inbuilt speakers and analog or digital audio inputs, the monitor’s ability to serve as the centrepiece of a small-room entertainment setup is pretty hobbled. There are no analog or digital audio outputs for re-routing sound (from the HDMI connection) to powered outboard speakers either, meaning soundtracks from connected games and movie sources can be enjoyed only via a set of cans attached to the headphone socket or via speakers attached to a computer.

The use of LED backlighting enables this monitor to achieve deeper black levels than conventionally backlit LCD monitors, and this has benefits to the overall colour performance. Tests performed at 1080p (1920 x 1080) resolution revealed colours that were typically rich and vibrant, with reds and greens lacking the distracting and unnatural radioactive quality that attends many PC monitors.

The backlighting was even, with no noticeable hot spots from where we were sitting, a problem that affects many LCD monitors, both LCD and CCFL. Despite this, whites lacked purity and appeared slightly ‘dirty’ on the settings we used.

We headed to the menu options to adjust for this, but the range provided was limited. You’ll find modes for playing movies, games, and looking at photos, but these generally just alter the white balance towards blue, and simultaneously oversharpen the image.

An sRGB mode tends to look the best for documents and the web, while a “standard” mode lets you define colour how you like it. An AdobeRGB option will have been welcomed by photo junkies, but, overall, the casual user will be more than happy with the Benq’s colour performance. Except, that is, in “eco” mode, which tends to reduce screen brightness significantly, and would be best used only in dim rooms.

Viewing angles on this monitor are reasonably good. From off-axis left and right, images remained mostly sharp and brightness was largely undiminished. The vertical angles aren’t as good, but brightness didn’t drop away as sharply as we’ve experienced on conventional LCD monitors. Benq lists the viewing angles as 170 degrees horizontal and 160 degrees vertical, which wouldn’t disagree with.

Response time is a claimed 5 milliseconds, which should be fast enough for gaming and movies.

We found the V2420H sat too low on our desktop to be ergonomically comfortable, and had to prop it onto a couple of telephone directories to bring it up to the ideal height. The ability to adjust for height and vertical tilt appears in many conventional LCD monitors of this price, and would be a thoughtful inclusion here.

The BenQ V2420H is an attractive high resolution monitor that, lacking some AV credentials, seems intended primarily for productivity, rather than entertainment applications. Its $479 price puts it up against larger 26 and 27 inch LCD monitors, which means you’re paying a premium for being among the first to introduce LED technology to your desktop.

Street prices for this monitor are a little more in line with what your wallet might like. We’re seeing tickets of $350 from most online and shopping mall retailers, which is around $100 more than 24 inch LCD monitors. The cost of same-sized LED monitors from the likes of Acer and Samsung is right on par with the BenQ, however, making the V2420H more than competitive in this category.

Just be sure to check out the connectivity options provided by the other brands if you want more flexibility from your desktop display.