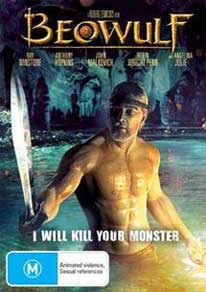 The initial shock of discovering that Beowulf was entirely – not partially, as assumed -computer generated imagery (CGI) lasted for a good 15 minutes into this movie. And, unfortunately, one of the first characters encountered in this digital retelling of the world’s oldest English-language story, Wealthow, is so unemotionally rendered that the effect is impaired from the start.

What’s more, great as the face-mapping of real people onto the computer models is, they seem to have used Sean Bean as a model for Beowulf, then given Ray Winstone the voiceover gig. Still, you have to give credit to director Robert Zemecksis for both attempting to bring us a sort of grown-up successor to The Polar Express project, as well as sticking with CGI to allow him to convey some quite fantastical scenes.

Sadly, there are still too many dead eyes and-rigid, plasticky faces to allow that suspension of disbelief and enjoy the spectacle. Animations that use huge ‘live action’ movie stars to voice characters strike me as financially wasteful and counter-productive, credibility wise, but here we are again with Beowulf’s king, King Hrothga, voiced by Anthony Hopkins (jarring) and hero Beowulf himself by gangster-man Winstone, no doubt pleased with his digital rejuvenation.

The wafer-thin plot and an incredibly ill-advised injection of Austin Powers-style comedy – including a daft sequence with Beowulf riding a dragon and narrowly escaping being impaled ‘downstairs’ on a building’s spire (not once but thrice!) don’t help.