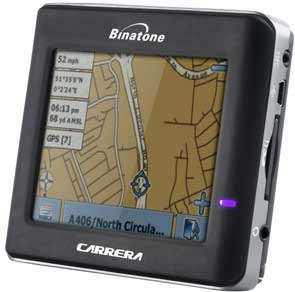 The Binatone Carrera X350 checks all the right boxes that a modern GPS should have – mapping, spoken word instructions and the ability to import data from an SD card. It’s an entry level GPS system, and that brings with it a dearth of features – and some that aren’t implemented as well as we’d really like.

Off the bat we should point out that this is the second time we’ve reviewed the X350. The first sample sent to us was apparently a pre-release sample with a lot of bugs in it; there was nothing in the box we received to indicate this was in fact the case. As a consumer check point, if you get a unit with the G.070725.1330.P08A firmware, it’s the older, less reliable model – take it back for a refund, as apparently these shouldn’t have made it to retail at all, and at the time of writing there was no obvious way to update the firmware.

At a basic price point it’s to be expected that you’ll get a basic set of features, and that’s exactly what the X350 offers. The display screen offers a very simple touch-based interface to begin with, and for the most part the menu structures make sense. They’re a touch slower than most other GPS systems, and that sluggish behaviour was something that we quickly found permeated the X350 experience.

We re-tested the updated X350 with a variety of routes around Sydney. The manual notes that it’s rather slow to get an initial GPS lock, and it’s not kidding; our first lock took just over nine minutes, and even subsequent triangulation attempts weren’t particularly speedy. Likewise, if you do wander off the proscribed track, don’t be travelling too fast, as the X350 is pretty slow to recalculate the optimal route. We did hit some instances in our tests where it gave very bad driving directions, although thankfully not as bad as with our original testing of the unit.

That’s not to say that the X350 is a complete write-off. On the plus side, the X350 has a nice clear speaking voice for instructions. The display screen is bright and the map layout is nicely logical. The car mounting arm is quite stiff and at the same time flexible enough to be quickly mounted and positioned for optimal viewing without either obstructing the driver’s vision (as is the case with some larger GPS units) or sagging downwards (as cheaper arms, including the one we’d previously tested did).

There’s no shortage of entry-level GPS units on the market today. The Binatone X350 is cheaper at RRP rates than most of them, but that budget price does carry some rather significant challenges with it. If your budget simply can’t stretch the extra $100 to the lower end TomTom or Navman units, then the X350 will still get you there most of the time, but it’s nowhere near as polished or accomplished as its counterparts.