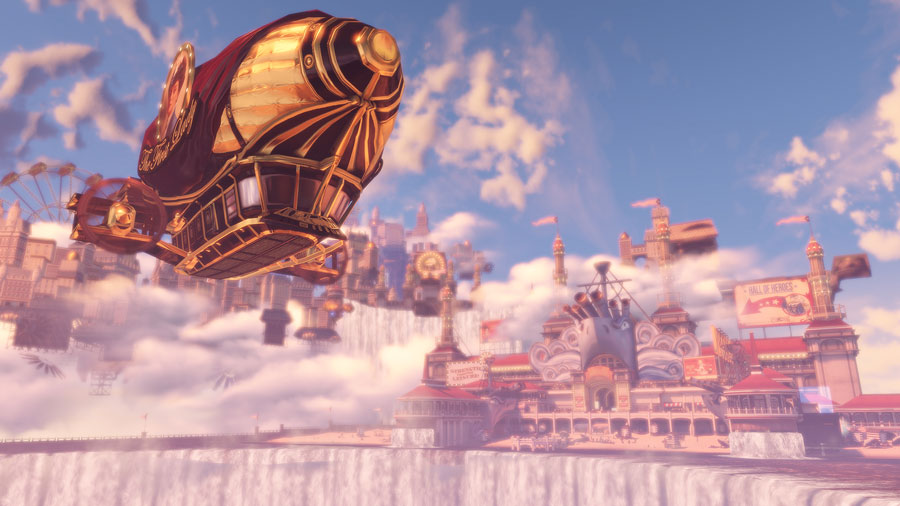 Set in the year 1912 and apparently a nod to ‘American Exceptionalism’ (the notion that the US has a mission, almost a duty, to spread liberty and democracy around the world), the story of Bioshock Infinite centres on the relationship between your character DeWitt and an ‘AI’ or Artificial Intelligence one, Elizabeth.

Without spoiling the thought-provoking denouement towards the end of the game, it’s fair to say that the writing in this game represents a major creative leap over the competition.

Gone is the underwater realm of ‘Rapture’ from the first two Bioshock titles, and in its place is the pretty city of Columbia, floating amongst the clouds and supported by all manner of balloons and World’s Fair-type steampunk style contraptions.

As Booker DeWitt, you are led through a beautifully-realised world – quite literally, once you’ve met Elizabeth – and quickly learn that while gorgeous, that world is being violently contested by two opposing factions: the original citizens called ‘Founders,’ and the revolutionary people calling themselves the ‘Vox Populi’.

Since Bioshock Infinite is a first-person shooter, you spend the majority of your time rushing from one spot to another dispatching the bad-guy Founders and their agents using a combination of conventional weapons and magic (called ‘Vigors’). Every player will quickly find their personal favourites (a necessity, given that you can only wield two Vigor powers at any one time) and forget about the others entirely.

The first thing that strikes you when you first start playing Bioshock Infinite, the third in the series of combat adventure games built around the creation of a dystopian, retro universe peopled by (citizens you ultimately discover are) vicious, elitist, highly prejudiced scum bags, is that developer Irrational Games has created an extraordinarily deep and complex gaming universe.

The second thing, once you’ve played for a couple of hours, is that in spite of that incredibly impressive achievement, the main substance of the gaming experience quickly becomes routine and a little tiresome.

Navigating the floating city is much aided by the ‘Skyline’ system, which also adds an entertaining ‘death from above’-style kill to your repertoire. Originally a system built to move cargo around the city and now at your disposal as a fast, albeit occasionally disorienting, fast-transport mechanism, using it feels like you’re hanging off a roller coaster at a Six Flags amusement park.

Elizabeth, as you soon discover, has an interesting ability, and can tear the fabric of space-time, essentially revealing alternate universes where things play out differently from before. It’s a brilliant, if not original, mechanic, responsible for transforming the narrative of the game and delivering some exhilarating turns of events. But we’ll leave it at that for fear of ruining it for you.

There’s a huge number and variety of different things to collect as you wander around, including ‘Voxophone’ recordings, ammo, money, ‘Salt’ that powers your magical augmentations, health and weapons. Every corpse you leave in your wake can be searched for such loot and, commendably, adopting a curious, exploratory attitude in the game is rewarded with goodies in just about every nook and cranny you investigate.

But this can become too much. It’s as if Irrational think you’re going to be bored just trying to follow the main story quest so need to constantly nourish your feeble ability to focus on the job at hand by diverting you with collecting trinkets and shiny things like you’re a gormless, attention-deficit-disorder plagued child.

Elizabeth is certainly more useful than most AI characters, most notably because she doesn’t need constant micromanagement or charge mindlessly around getting herself killed in the manner of most ‘AI companions’.

The greatest utility probably comes from her intermittently chucking health potions or ammo at you in the middle of frantic firefights, when she ‘notices’ that you’re running low. But however lucid her comments to you and however helpful her actions, it’s still quite a stretch to describe Elizabeth as an intelligent companion, much less begin to form any kind of genuine emotional bond.

However, the truth of videogaming fiction is that it’s universally terrible, as a rule, and in that respect Bioshock Infinite significantly raises the overall bar, in much the same way a frog inadvertently hopping into a TAB bistro might raise the average IQ of the entire venue.

Most storylines in videogames, even when they think they’re being clever, end up as contrived nonsense.

Bioshock Infinite, however, draws on historic anomaly, dystopian fiction and theoretical physics and, judged by the prevailing standards of the industry, takes flight and soars into the heavens. But we miss the Big Daddies.