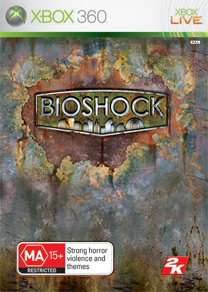 Bioshock is a great name for a game  – before you even put the disc in the console tray, you’re already thinking it’s going to have some elements of surprise, plenty of excitement, maybe some deformed monstrosities that, unless videogaming has suddenly started sprouting hair in odd places and its voice has dropped an octave, you’re going to be required to blast off the face of the earth. What the name doesn’t prepare you for, perhaps should tell you in advance by way of a small but striking leaflet inserted into the game case, is that the game name is intended to be taken quite literally. Playing this game will actually give you a bioshock, many in fact – which is to say, about 15 minutes in, probably, if my own experience is anything to go by, you’re going to jump out of your skin as you nearly drop the controller, jerk rapidly upright in your seat and experience a slight skip in your regular heart rhythm pattern.

This will happen because Bioshock achieves that most extraordinary and exhilarating of things – it scares the living daylights out of you. Regularly. Often enough, in fact, for you to think twice about playing it in a room on your own with the lights out. It is chock full of moments that make you want to exclaim, “Yes, bloody right! That’s why I play videogames!” Those old enough to know (ask your Dad!) will probably last have experienced this with the original Resident Evil (Biohazard) on PlayStation, but it’s a facet of any good entertainment that elicits such dramatic emotional responses, and it feels wonderful.

Bioshock is brilliantly scripted, both in set piece sequences that enhance the action and, much more rarely found in videogaming, in terms of the actual storyline. The overarching narrative is intriguing and compelling, scary most of the time, and peppered with some quite genius design and nomenclature – the naming of certain characters, I’m quite sure, will quickly become iconic and be spoken about for years afterwards, such as the bizarre duo you spend much of your time tracking down, the Big Daddies and Little Sisters, as well as the name of the virtual world itself, Rapture. Without giving any of the story or content away – it’d be criminal to spoil your fun – the actual game play is familiar but with bells and whistles that raise it well above the standard run-and-gun fare, there are plenty of skills to acquire that help you in your quest and the game world is large and intriguing enough that, after the initial frantic room-clearing activity, it’s often entertaining enough just wandering around exploring.

Just to be clear, however, Bioshock is not a game for the faint of heart, small children or anyone fitted with a pacemaker. The atmosphere, the environments, the unfolding storyline, everything conspires to fray your nerves, make you suspicious and put you on edge. It’s gory, graphic, violent. It’ll give your little cousin or your kids nightmares, so tell them you’ve got ‘important grown-up work’ to do and shoo them out of the room before you play this game.

Bioshock makes watching television seem like a quaint pursuit of the feeble and elderly. It’s a testament to how good videogames can be when real talent and vision is exercised, and a superb showcase to prove to your musty old aunty or whoever else who still thinks videogames are a pointless waste of time. Bioshock is entertainment that makes you feel alive, it makes you thrash around in surprise and shock, it keeps you on your toes, and it entertains. It’s active and involving, being one of those games that is as much fun to watch someone else play as it is to play it yourself and it’s equally capable of spreading its special brand of Shock Love around to any spectators you might have acquired.