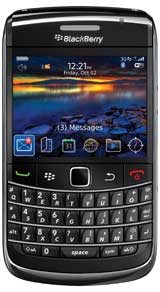 The original BlackBerry Bold may be a couple of years old now, but it still remains the ultimate weapon of choice for email warriors the world over. Now, BlackBerry has given its flagship device a facelift – introducing the Bold 9700. It’s the Bold but slimmer, more compact, better camera, and with a nifty new touchpad instead of a trackball – but will the redesign be enough to keep the ‘CrackBerry’ fans hooked?

The most important and obvious feature of any BlackBerry device is, of course, email. The Bold 9700 performs just like any other BlackBerry on this front – after a relatively painless web set up for email accounts, your BlackBerry begins filling up with messages. While the 9700 behaves similarly to its Bold predecessor, the new device does have a slightly smaller keyboard – which makes a noticeable difference when tapping out emails. It is still one of the best (and easiest to use) full QWERTY keyboards you’ll find, but be warned if you have big thumbs – it can feel a bit cramped.

Setting up email and contacts sync is shockingly simple. Once a web account is set up, you select the accounts you want synced, and it’s all automatic. You’re also offered the option of wirelessly syncing contacts, which again takes place instantly and automatically. An additional feature is BlackBerry’s fantastic desktop software to sync with PC-based contacts and calendars etc. Apple users will also be pleased – the software tested seamlessly on a Macbook and is beautifully simple to use, even linking directly with iTunes to sync music and playlists onto the Bold’s microSD card (expandable up to 16GB).

Once your media has been synced, the Bold’s media player is perfectly simple. iTunes artwork is automatically synced too, and the 3.5mm headphone jack and upgradable storage means you can ditch your old MP3 player. The screen is quite small though – not really great for watching videos on, even if it does appear to have a good resolution.

While BlackBerrys past have typically featured a trackball to navigate through menus, the 9700 features a new touchpad interface. A common complaint about trackballs has been that they become less accurate over time (as they collect dust etc), and the 9700’s trackpad is a very good replacement. It behaves exactly the same as the old trackballs and should prove more reliable over time – but it can be a tad finicky if you’re navigating through lots of small menu items. You will occasionally find yourself swiping back and forth trying to hit the icon you’re aiming for, but for the most part it works with aplomb.

The BlackBerry menu system is beautifully simple and easy to navigate. Your most used items (like email, SMS, web browser, calendar, contacts) sit on the homescreen, while a wider menu screen offers access to downloaded apps (Facebook, for example) and additional office features like basic Word and Excel. Another bonus: the BlackBerry ‘App World’ is now available in Australia, similar to Apple’s App store for iPhone.

The 9700’s web browser is functional but not outstanding. It is certainly a step above browsers seen on a typical Nokia and Sony Ericsson, but it falls short of the high standard set by the Apple iPhone. The browser is fine for viewing most web pages, but the 9700’s petite screen can make reading small fonts a trial. It does render pages quickly compared to other smartphones, but it is a long way off being iPhone speed.

One let down is the camera – while 3.15 megapixel is a step up from the original Bold’s lacklustre camera, this is still bottom-of-the-line. BlackBerry has always focussed more on the business user than consumer so cameras clearly aren’t a priority – rival brands are consistently offering 5 to 8 megapixel cameras in a similar price range. 3.15 megapixel is sufficient for basic happy snaps, but the Bold will definitely not be replacing your digital camera.

The BlackBerry is really in a league of its own when it comes to email-centric mobiles. Its chief rivals: Nokia’s E-series (including the new E72) and the HTC Snap both borrow heavily from BlackBerry’s design but neither are as well made or easy to use as the Bold 9700. For web browsing, the Bold is outperformed by the Apple iPhone, but the BlackBerry is unmatched for email and wireless contacts sync.

The best BlackBerry yet and one of the top mobiles available today. The 9700 fits perfectly in your pocket without the bulk of its predecessor, and BlackBerry email is unsurpassed in simplicity and useability. If you’re new to mobile keyboards, play with the Bold 9700 first – the keys can be tricky to get used to, but it’s a small price to pay for the best mobile email experience available.

TCL is going to become a household name