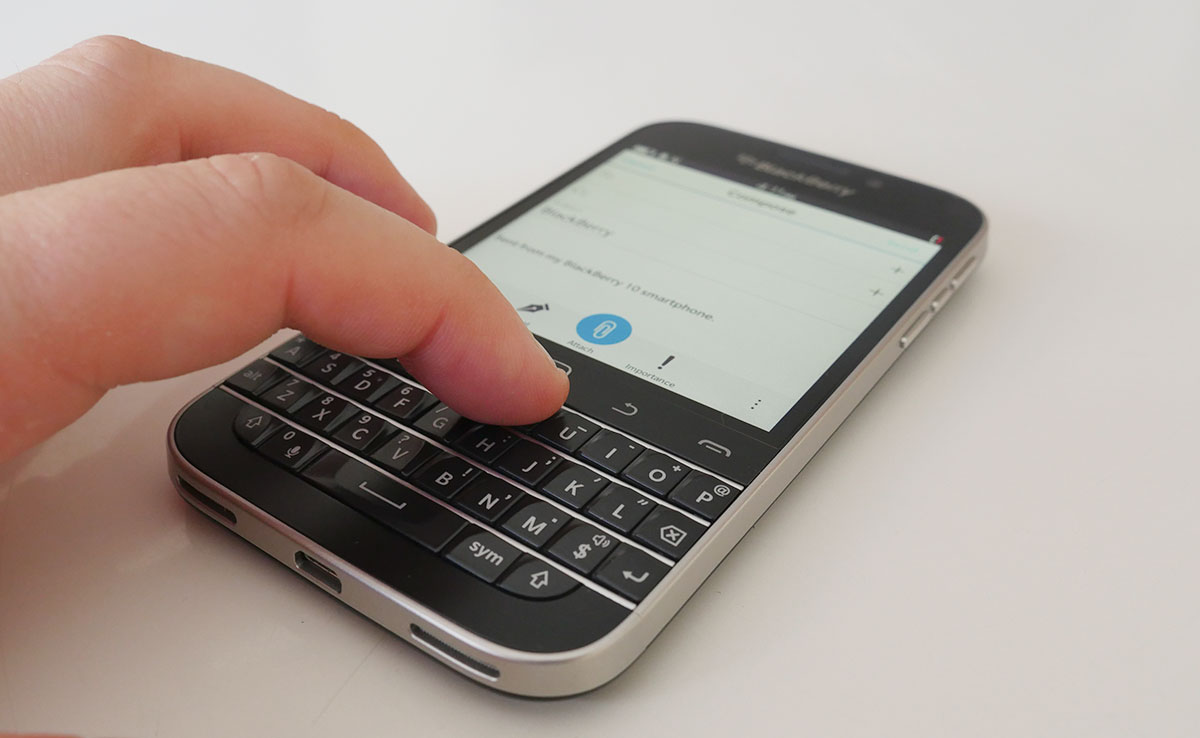 Once a leader in modern smartphones, BlackBerry now trails Android and iOS, fighting for third with Windows Phone. Can the Classic bring back the glory, or is just another nail?

A new BlackBerry for a new time, the Classic is the latest from a company that didn’t quite see the rise of the touchscreen, at least not in the way Apple, Samsung, Sony, and HTC have made possible, with BlackBerry struggling to play catch-up to the other players out there.

This model is different to the competition, and yet it stays true for what BlackBerry has come to represent over the years, with a phone made for writing emails on, complete with a physical keyboard that can let you type quickly once you’ve mastered the buttons.

Above this keyboard are four soft buttons for the phone, settings, back, and a multi-task button, with an optical trackpad sitting dead centre between them all.

Just above this is a 3.5 inch screen running a resolution of 720×720, an unusual resolution that will tell you this is a square screen, and one that displays a pixel clarity of 290 pixels per inch. Corning’s scratch-resistant Gorilla Glass 3 protects the display, and there is, as you’d expect these days, multitouch capabilities.

Beneath all of this is the technology, with Qualcomm’s Snapdragon S4 Plus running as the processor, paired with 2GB RAM and 16GB storage, the latter of which can be upgraded with a microSD card slot. BlackBerry’s operating system runs natively here, with 10.3.1 provided out of the box.

Connections for this phone are fairly standard, with 802.11a/b/g/n WiFi, Bluetooth 4.0 with Low Energy (LE), Near-Field Communication (NFC), GPS, and support for 4G LTE. MicroUSB is also included for data transfers and charging of the phone.

Cameras are also here, with an 8 megapixel rear camera with autofocus and an LED flash, while the front camera is a 2 megapixel camera.

Buttons are fairly large in number on this handset, hardly a surprise given the keyboard on the front of the handset, and you’ll find this, the four soft buttons previously mentioned, and a button under the optical trackpad on the front.

The sides feature buttons, too, with a power button up along the edge, while the right edge features three buttons near the top for volume up, pause/play, and volume down.

There are far less ports than buttons, however, with merely a 3.5mm headset jack up the very top on the left and the microUSB port at the bottom in the middle.

Two SIM-ejectable trays can also be found on the BlackBerry Classic, providing a nanoSIM slot and a microSD slot.

The battery is built into the BlackBerry Classic and is rated for 2515mAh.

It has been a while since we got to play with a BlackBerry, but the company is back and ready for another stab at the smartphone space, offering a phone that brings with it the style of BlackBerry, the hardware keyboard its fans and previous owners have loved, and a body that looks professional.

Pick up the Classic and you can see a phone that exudes quality, though it is fairly hefty. The edges are metal with the back a textured plastic that is very easy to grip, and the front is classic BlackBerry, with the small keyboard beneath.

Those are real keys here, with more buttons on this one phone than practically all of the currently used smartphones in the office put together, and that’s a BlackBerry thing, plain and simple.

Grip the edge and you’ll find three buttons, with ones made for media on the side, representing volume up, volume down, with pause and play wedged in between and sharing the same little silver button. If you like to listen to music and haven’t grabbed a pair of wireless headphones, these will become very familiar shortly.

Up top, however, is the power button, and given that this is a smallish handset, it’s within reach for most people, even those of us with smaller hands.

Overall, there’s a good solid heft to the unit, though it is much heavier than other phones of its size, clocking in at 177 grams even though it only has a 3.5 inch screen.