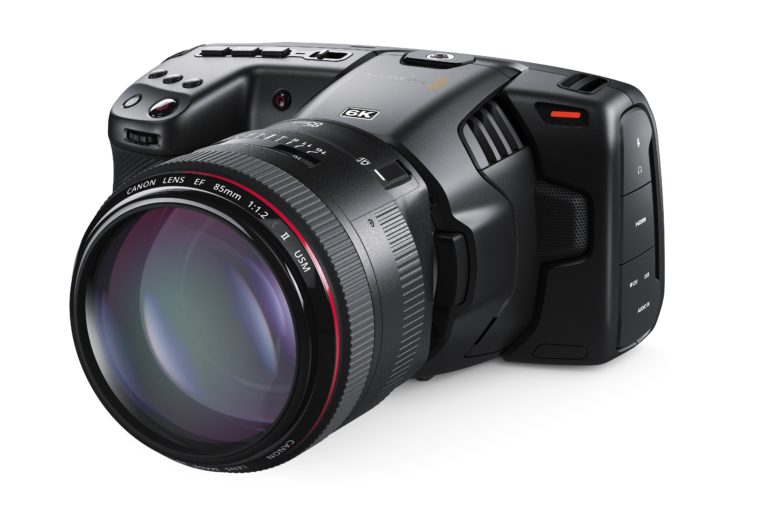 Blackmagic is highly respected across the industry for its innovation as well as making affordable digital cinema products. The Blackmagic Pocket Cinema camera is no exception, raising eyebrows with its high-end cinema specs and surprisingly low price tag.

The Blackmagic Pocket Cinema Camera is a compact, hand-held ‘digital film’ camera. It’s made for budget-conscious cinematographers and filmmakers who want to create that ‘Hollywood’ film look. A look that would normally require some very expensive gear.

It resembles a DSLR still shooter more than a film camera. It comes in two flavours – 4K and 6K. The 4K is slightly more compact, comes with a 4K 4/3rds sensor and MFT lens mount. The 6K version has a larger Super 35 sensor that cranks out 6K or 6,144 x 3,456 resolution recordings. This is what we are reviewing.

The 6K model has a Canon EF lens mount rather than the MFT on the 4K model. It is designed to use full-frame photographic lenses like the ones we used, shown below. This helps create shallow depth of field effects with lovely bokeh.

The 6K sensor provides latitude to zoom in and re-frame in a post – there’s so much resolution to work with. So, you can take a wide shot and turn it into a close-up. All while retaining quite a bit of sharpness and detail.

Also impressive is the camera’s light sensitivity. The Pocket Cinema Camera features dual gain ISO up to 25,600. It can shoot in very low light with minimal noise or ‘grain’. While most of our shoots were in daylight or lit conditions, we did check out a few night shots. We were impressed with how well it managed to capture detail at 3200 ISO with no perceptible graininess.

The Pocket Cinema 6K has 13 stops of dynamic range on tap, including High Dynamic Range support. This gave us lots of versatility to capture detail in a range of different lighting conditions.

We shot an indoor interview next to a large window. We didn’t need to blast the subject with fill light to keep the world outside blowing out to white. It’s good also to see DCI-P3 colour-space support too.

Blackmagic makes one of the most popular pro colour grading tools in the industry – DiVinci Resolve. It is no surprise that the Pocket Cinema Camera’s colours are great as well. (A copy of DiVinci Resolve Studio is included in the box too.)

Blackmagic uses the same Gen 4 Colour Science from its pro-grade URSA Mini Pro G2 camera. You get features like a 12-bit gamma curve for highlights and shadows, along with the Blackmagic RAW image codec for post-production grading.

To create a visual style, you can load custom LUTS (Lookup Tables) and see the effect via the monitor. There are some built in 3D LUTs included. You The camera can be set to bake the LUTS to the final files or set to monitor-only mode.

For some great examples of the types of looks created by the Pocket Cinema Camera, check out Blackmagic’s Gallery here.

The best part about this camera is the creative filming options it gives you. You can go

Straight-to-post-production file formats are a real time-saver too. You can use the 12-bit Blackmagic RAW for 5.7 and 6K modes. Or choose the 10-bit AppleProRes for 4K and lower.

We found that HD, 25fps, ProRes 4.2.2 produced a great result. The Blackmagic RAW is the real winner with amazing colour grading potential and it’s super-quick to use in Adobe Premiere.

As this is a ‘cinema’ camera, we didn’t expect to see a very advanced auto-focus system.

The camera can auto-focus, provided that the lens supports it. You can press the focus button or half-shutter to lock it in. Double-check your focus via the dedicated Zoom button or focus indicator overlay.

Our Canon EF lenses had their own image stabilisation. Very handy as there isn’t an IBIS (In Body Image Stabilisation) system to supplement this.

The Pocket Cinema Camera’s footage storage options are fantastic. You can

Our favourite option by far was recording to SSD via the USB-C connector. This makes it so easy to edit on the fly or check footage. Simply plug the SSD drive into a USB-C equipped laptop.

Take care as not all external SSD are supported. Check the compatibility list to avoid any dead-ends.

You’ll need to secure your SSD and USB-C cable as it is quite exposed to being knocked out. Thankfully there are plenty of 3rd party cages and kits available to fit this.

Pocket Cinema Camera body is made from a lightweight carbon fibre polycarbonate composite. It feels sturdy and only weights 900 grams. While I can’t see any claim about waterproofing, it’s good that the rubber boots covering the connections are quite snug.

There’s a screw mount on the bottom and top for tripods etc. A cold-shoe on top would be better. However, a cage like this one from SmallRig will give you plenty of options.

Another thing to remember is that the Pocket Cinema is actually quite wide, and may not fit on all gimbals.

Otherwise, the camera body isn’t overloaded with buttons and they placed in usable positions. For fingertip shooting, there’s stop/start and still photo buttons and a Iris jog-wheel on the handgrip. Nearby are ISO, Shutter and White Balance functions, followed by 3 customisable buttons. Alongside the display are Zoom, Iris, Focus, High Frame Rate and the Menu button. There’s a handy tally light too, and some pretty large cooling vents.

The best part about using the Pocket Cinema Camera is the 5-inch 1920x 1080 display. It is sharp enough to check focus and set your composition. The touch interface allows tap-focus on any point in the viewfinder, or slide-adjust aperture, shutter ISO and other settings.

Different information can be overlaid on the monitor including a histogram, peaking and focus indicators, audio levels, frame guides and more. We found the focus assist to be particularly helpful with some of our lens setups.

The menu system is also easy to use with quick access to what you need in just a few taps. We liked the extensive settings menus for Record, Monitor, Audio, Camera Setup, Pre-sets and LUTs. Sony, you could learn a few things here!

If you are planning to shoot outside, the screen seems reasonably bright. But you might want to consider a brighter or larger monitor should you plan to do it a lot. The screen does not articulate or flip outwards into a mirror mode if you need to film yourself.

A wide range of connections including a full-sized HDMI plug with support for HDR and 10-bit output. There’s a USB-C jack (power the camera and charge its battery at the same time). Otherwise, connect to an external SSD drive. The downside is that you can’t do both at once. A USB-C Pass-through power dongle may work (not tested).

For recording Audio, there’s a mini-XLR connector with 48-volt phantom power. You can use professional radio and boom mics, along with 3.5mm headphone and separate mic-in jack. It’s good to see a sturdy DC power connector, although we struggled to release it once plugged in.

For recording and playback, there are 4 built-in shock-resistant microphones and a small speaker. We mainly used exteral mics. The internal mics seemed to do a reasonable job, especially considering the fan noise.

The internal pre-amps did seem a little on the weak side compared to our Zoom H6 external recorder. They needed to be turned way up, so we didn’t want to rely on them. Still, it’s great to have the option of using a camera-mounted shotgun mic via the 3.5mm port as a backup while using a radio mic via the mini-XLR, and both recording to separate channels on the camera.

Be aware that recording audio on the camera will drain battery life.

The big thing that the Blackmagic Pocket Camera suffers from is poor battery life.

If you plan on running-and-gunning with this camera carry 3 or 4 of these L-Series batteries. Otherwise, build a rig with a big V-Lock battery.

There’s also a Pocket Battery Grip that holds 2 L-series batteries for $369. For studio setups, connecting to mains power is your best bet. But it really limits camera portability.

The Pocket Cinema Camera 6K’s capabilities are amazing considering that you can pick one up for $2,760 at Videopro.com.au.

There isn’t a comparable camera out there that gives you 6K, 13 stops dynamic range, HDR, 12-Bit Raw recording and more for the price.

You could spend well over $15K on a pro cinema camera and not get all that much more functionality.

It’s not ideal for vloggers or content creators who spend most of their time in front of the lens. As the camera lacks object or eye focus tracking and in-body image stabilisation, it would be a challenge to get these right without a camera operator.

Consider the Pocket Cinema Camera 6K as a starting point. You can add your existing gear like an external monitor, etc., and build it into a capable system that’s perfect for your needs. There’s a whole cottage industry 3rd party rigs and gear available for it along with a dedicated YouTube fanbase and some great instructional videos to explore.

And if you are just looking for and action cam check out GoPro here.

Features
Value for money
Performance
Ease of Use
Design
Incredible 6K image performance and dynamic range
Very easy to use menu system
EF mount it good for Canon people
Output to SSD drives makes for fast workflows
5-inch screen and built in multi-channel audio recording mean you don't need to add your own
Battery life is nowhere near enough
5-inch screen doesn't articulate or fold out
You will probably need a rig for day to day use
EF mount is not so good for non-Canon people
4.5