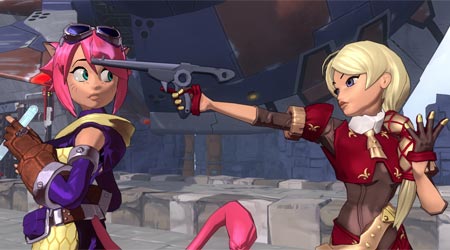 Based on the comic-book property of the same name, Blade Kitten’s treasures are not immediately obvious or appealing, but once you get past the rather Valley-accented pink-tailed girl-cat thing that serves as the protagonist, Kit Ballard, you’re presented with a very passable, even quite fun side-scrolling platforming puzzle game with excellent production values.

Exploiting the acrobatic movements and sword-enabled combat tactics of the main character, your task is, like all platform games, to negotiate a series of obstacle and enemy-filled levels while collecting ‘hex’, which serves as money. The hex then enables you to buy costumes for Blade Kitten and, much more interestingly, upgrades to your sword, or ‘Darque Blade’.

Seeming to borrow from such brilliant creations like Shadow Complex, also on Xbox Live, and even good ol’ platform genius like Super Mario Bros, including rideable Yoshi-like mounts, Blade Kitten is certainly ‘inspired’ by other more original games – its creator made the heavily-derivative Crash Bandicoot clone Ty the Tasmanian Tiger – but is still a pretty decent ride in its own right.

Movement is fluid and the mechanics make sense after you’ve absorbed their idiosyncrasies via the tutorial info, although the jump isn’t always triggered when you want it and combat is a very repetitive and ultimately tedious two-button mash-up.

More likely to appeal to youngsters who still watch Saturday morning cartoons on TV, and mostly the girls amongst them, Blade Kitten is pretty but has very little to offer anyone accustomed to more ambitious Xbox Live fare.

Max Everingham is the owner of Game State, a B2B videogame software analysis & marketing consultancy. Max is a videogames veteran, having worked in the industry since 1996, including senior brand & product marketing positions at EA and Codemasters.
Overall
Performance
Design
Reader Rating0 Votes
3