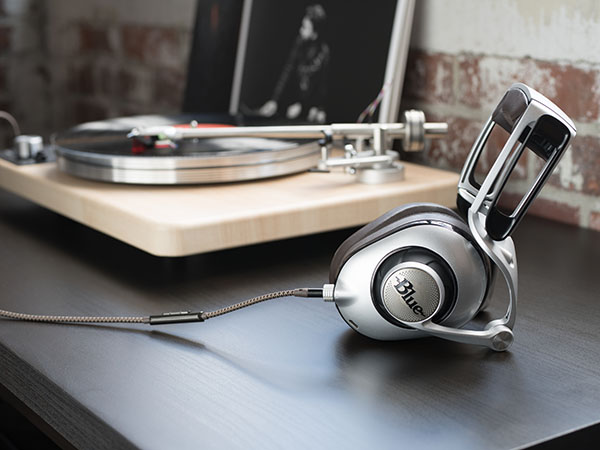 A couple of months ago I was impressed by the entry-level headphones from US firm Blue Microphones, the Blue Lola. Continuing the name theme, but at the top of its range, are the Blue Ella headphones.

Since the “low end” Blue Lola headphones (our review here) cost nearly $500, you won’t be surprised to read that the Blue Ella headphones are straying into high-end prices. Indeed, they sell in Australia for $1,299. In some ways, they are very similar to the Blue Lola models. In others, very different indeed.

How are they similar? They look quite similar with large, bulky earpieces that fully encompassed my ears without squashing them into unfortunate shapes. They have the same “Formula One race car inspired” mechanical arrangement for adjusting the height of the earpieces. I’m neither here nor there about that. It’s one of many effective solutions. But I would note that my wife does not approve of the styling.

Where they differ is primarily in the working parts. First, rather than dynamic drivers, they use planar magnetic drivers. Dynamic drivers are like regular loudspeakers. They use a cone, or something similar, with a cylindrical cylinder at the back. Around the cylinder is a coil, and surrounding the cylinder is a magnet. As the musical signal goes through the coil, it creates a magnetic field which works against the magnets, moving the coil. That, in turn, moves the cone backwards and forwards.

Planer magnetic headphones use a thin membrane with a conductor attached to its surface. The magnets are on both sides of the membrane. The conductor covers pretty much the whole membrane, so it moves evenly.

The drivers of the Blue Elle headphones are 50mm by 500 and are only 50 microns thick. That’s 0.05 millimetres or around half the thickness of a piece of standard 80gsm paper. Thin membranes are light in weight, which means excellent responsiveness.

The planar magnetic drivers are mounted in large sealed enclosures. Blue says that the Ella headphones are “handmade in small quantities by expert craftsmen”.

Another way in which they differ from the Blue Lola headphones is that they have an internal amplifier. Blue rates this at 250 milliwatts of output.

The amplifier is in turn powered by a 1,000mAh battery, which you charge via a Micro-B USB socket on the left earcup, next to the audio connection. It takes several hours to charge. I seemed to get something around the claimed 12 hours of playback time. Should the battery run flat you can still use the headphones in passive mode.

The headphones detect how widely they are stretched. When resting with the earcups together, they switch off. The come on again when you open them up to put on your head. Power status can be seen from the gentle glow at the back of each earcup. This cannot be switched off.

The audio input is analogue only and uses a 3.5mm stereo socket. But you won’t be able to use most third-party cables because the actual connection is sunk quite a long way into the body. The plug on the supplied cable has a very thin shaft which allows it to reach.

There are two cables provided, both with wound-cloth insulation. One is 1.2 metres long, and is fitted with iOS-compatible remote controls: volume up and down and play/pause. The other is 3 metres long and not so adorned. Also included is a 3.5mm to 6.5mm plug adaptor.

Now, you might be thinking: headphones, built-in amplifier, so Bluetooth, right?

Wrong. These are purely analogue headphones. The amplifier is there to power the drivers as part of the total audio design package. It isn’t there so that they can work wirelessly.

The headphones are large and bulky. They weigh 482 grams according to my scales. Included is a soft carry case made of some very luxurious-feeling material.

Let’s get technical for a moment. One of the very useful things about having an amplifier built into the Blue Ella headphones has to do with impedance. Impedance is related to the resistance any material offers to the passage of electricity. Only superconductors allow electricity to pass through perfectly. Everything else, even the finest gold and silver, impedes or resists its passage. We measure impedance – to simplify things a little – in ohms.

Headphones normally impede the electrical signal by somewhere between 16 and 300 ohms. A lower impedance generally lets the playing device – your phone, for example – deliver more power to the headphones. But a lower impedance also means that more power is wasted in the wiring and in any internal impedance within the source device. Indeed, any weaknesses in the wiring become more obvious with a low impedance connection.

The cool thing is that an amplifier typically has a much higher input impedance than headphones. In effect, it isolates the headphones from some of the problems that might be downstream. All that is in addition to making it independent of the power output of the source device.

Ah, but a multimeter only measures DC resistance. All music is alternating current. Might that not be different?

So I took a trip to Jaycar Electronics and purchased some 47 ohms resistors, a 3.5mm stereo plug and a 3.5mm stereo socket. I made a measurement rig, plugged the headphones into a headphone amplifier, with the 47 ohms in series. Then I created a 1,000-hertz sine wave in my computer and fed it to the rig. A little bit of arithmetic later I had a result of 50.6 ohms for the headphones with them switched off, and 4200 ohms with them switched on.

That latter figure is a little lower than I would have expected, but it does mean that the cable and internal impedance of your music player or phone will have virtually no effect on performance.

The only puzzle remaining is why Blue would put such an unflattering figure on its website.

Listening to the Blue Ella headphones

Blue doesn’t specify a sensitivity for the headphones. That’s the figure that gives you an idea how loud they’re going to go. There would be two such figures for these headphones: powered on or not. So will they go loud enough?

Well, powered off, it will depend on your source device. I played a little of Beethoven’s First Symphony (an original instruments version) on my Google 2 XL phone using the included mini USB Type-C to analogue DAC. At maximum output the listening level was comfortable, but that was it. Switching to something a little louder – Rage Against the Machine’s debut album – the level was a little too low to be fully satisfying.

But when I switched on the headphones so as to get the benefits of the internal amplifier, there was plenty of level available for both music types.

I’d note at this point is that the headphones seemed to sound, for any given decibel level, a little quieter than many. That’s because they seem to produce just about no audible distortion at all, even running loud. Noticeable levels of harmonic distortion make music seem louder. And, no, you don’t want this kind of artificial loudness. It’s wearing over time.

But even without being switched on, the headphones were powerfully loud when fed by a high-resolution audio player, or by my Oppo portable DAC/headphone amplifier. With power on, the Blue Ella headphones are powerfully loud pretty much regardless of source. Comparing them with some other headphones with known specifications, I’d estimate the passive sensitivity at around 96dB for 1mW of input. Since the internal amplifier has 250 milliwatts available, you’re looking at maximum levels pushing 120dB using the built-in amp.

Okay, that takes care of practical matters. How do these headphones sound? Are they better than the Blue Lola headphones, for example?

Why, yes they are. Noticeably. Clearly. Markedly.

It has been a while since I’ve listened to headphones which excited me as much as these ones. A long, long while. Because all I can say is positives.

I’ve probably heard headphones able to provide as much detail, but they’ve had other defects (for example, too much treble). I’ve heard other headphones with more, and perhaps more extended, bass. But often that was because the bass level was too high, and there were costs elsewhere. Such as loss of detail.

Instead, what the Blue Ella headphones delivered was an exciting completeness in the music along with a true high fidelity (that is, highly accurate) balance in the sound. The bass was solid and full and exact. The treble was detailed, and present regardless of what was going on.

And I just kept noticing things in the music that I hadn’t previously noticed.

It didn’t matter what genre I was using. “Killing in the Name” by the aforementioned Rage opens with a powerful bass riff, over which is played cymbals of surprising delicacy, and cowbells which rang through the mix intact. But the Beethoven was sweet and textured.

Some 1980s Eurythmic had me kind of dancing in my seat. The original Broadway recording of Fiddler on the Roof took on new life. Glenn Gould’s Steinway in his 1981 re-doing of Bach’s The Goldberg Variations was beautiful, bell-like, and marred as always by Gould’s irritating humming.

The overall sense, though, was liveliness. Of life. The music came to life in a way realised by few other headphones.

The Blue Ella headphones are for people who are really serious about high-quality sound. And for those who want their headphones to convey the true excitement of their music. You’ll be paying for that privilege, though. I think it’s a price that’s worth it. The Blue Ella website is here.