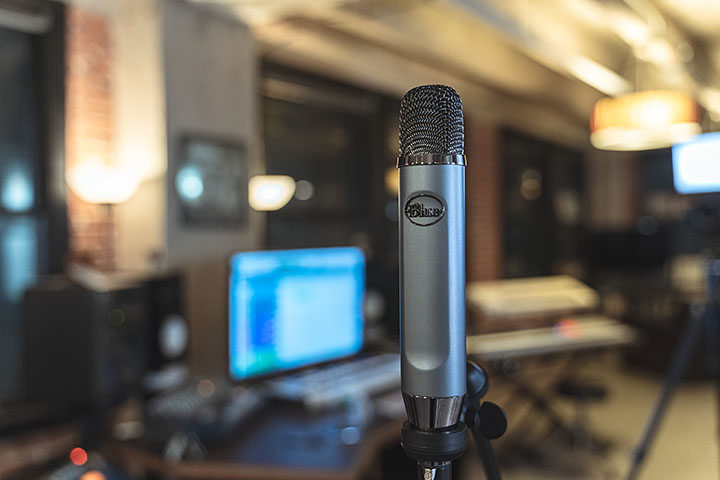 The Blue Ember is an affordable, studio quality condenser microphone from the company which dominates podcasting microphones.

Blue Ember – what type of microphone?

There are many different types of microphone: dynamic and condenser and electret and more, unidirectional and cardioid and more, live or recording or both. Certain types are essential for certain applications, while others might be pretty much useless in those applications.

It’s a condenser microphone with an XLR connection. Don’t let the fact that it’s shaped like a hand-held microphone fool you. The condenser capsule is designed to capture sound from the side – that’s the side with the “Blue” logo on it. It’s not hard to see which way around to use it.

In that way it’s good for Youtubers and the like. Because you mount the microphone vertically and speak into the side of the top, it barely obscures the lower part of the face. The microphone is 219mm long, 38mm wide and 32mm deep, although it looks more cylindrical than those measurements suggest. It is well built, weighing a solid 349 grams for the microphone alone, or 495 grams including the metal mount for microphone stands.

Let’s spend a moment on condenser microphones. “Condenser” is an old-fashioned word for capacitor. And that’s an electronic component consisting of two plates held opposite each other. You can pour current into a capacitor, charging up the two plates with opposite voltages. As the charge increases, the capacitor resists the addition of more charge. That has various uses in both DC and AC electronic circuits.

In a microphone, one of the plates is fixed while the other is suspended parallel to it, but is able to move to and fro a little. The two plates are oppositely charged by means of a 48-volt DC voltage. That’s provided by the microphone pre-amplifier. It’s known as “phantom power”. There’s actually very little power involved because current draw is tiny.

As the suspended plate moves closer to the fixed one, the voltage between the two plates varies a little. And because it’s suspended, that plate is always moving, pushed by the vibrations in the air, also known as sound. And, thus, we have an electrical signal that’s an analogue of the sound.

Condenser microphones aren’t as robust as dynamic ones (these work like loudspeakers in reverse, with magnets and coils) but are generally more accurate. That’s why most studio microphones are condenser style.

As I said, the connection is via XLR. That’s the large three-pin connection used in professional situations. And that’s very different to the cheap electret microphones often used with computers. These just have a 3.5mm plug. The three-pin XLR connections are “balanced”. The connection uses one pin for one end of the signal, another for the other end. Because the electricity is flowing (slightly) both ways at the same time on wires next to each other, any electrical interference attacks both signals simultaneously. And that means it cancels out, reducing noise levels. The design also keeps the shielding electrically isolated from the signal leads, also keeping noise down.

All that’s important because sometimes microphone cables have to run tens of metres to the pre-amplifier. Since their signal level is very low, they are quite susceptible to electrical interference. Balanced connections make long cable runs possible.

For recording and podcasting – particularly the latter – it’s important that the microphone be directional. Few of us have a totally sound-proofed recording studio, so we want the microphone to pick up our voice or musical instrument, and nothing from other directions. The Blue Ember is designed with a cardioid pickup pattern. “Cardioid” is so named because the response pattern is shaped like a heart, with high sensitivity immediately in front, reducing to the sides and reducing even further to the rear.

The frequency response of the Blue Ember microphone is rated at 38 to 20,000 hertz (no graph is provided). That suggests it’s probably not ideal for the deepest bass instruments, such as a kick drum. The company also rates the maximum sound pressure level with which the Blue Ember can cope as 132 decibels. Think not rock-concert-loud, but four-times-rock-concert-loud. In other words, it can cope with any voice up close.

As if to emphasise the point that the Blue Ember microphone is not for stage vocalists, the unit is mounted firmly by screwing in. The bottom section near the XLR connection is threaded and screws into the stand adaptor. It in turn is threaded. To remove the microphone from the adaptor takes, oh, maybe ten or a dozen rotations. The adaptor is attached or removed to the standard microphone thread mount by four or five rotations. No performer will be whipping out the microphone to prance about the stage.

But the part where the microphone screws into the adaptor has a collar. That can be loosened so that the microphone can be rotated to the desired direction.

Likewise, as suggested by the high overload threshold and the fairly tight directivity, the Blue Ember microphone is for use with one voice or instrument at a time.

I tried it out with my own voice – spoken, not sung – with a guitar and with some bells.

The vocal clarity was excellent, and even my voice didn’t sound as horrible as it usually does in recordings. My various stutters and missteps in reading the text I’d prepared were captured faithfully. As were some of my less fortunate mouth noises. The Blue Ember microphone is taking what’s there, and that means the bad with the good. I tried using a screen between my mouth and microphone to soften those little clicks and pops that I didn’t really want in the recording, but they managed to survive it.

Better technique – specifically talking past the microphone – largely fixed that.

The screen wasn’t needed, really, for “pop” protection. Yes, it’s easy enough to blow on the microphone, or talk into it from up close and produce some decent bass thumps from plosive sounds – you know, p-s, b-s etc. And of course, it was more affected by them than a typical dynamic microphone (for example, the famous Shure SM58, which has a sharply diminished bass.) But it didn’t seem particularly sensitive to them and I found that either by pulling the plosives or by speaking across the microphone, it was quite immune. There was a proximity effect – increased bass as I moved in close – but that was easily controllable. Or useful, if you wish to speak quietly for a more intimate sound.

The directivity was excellent. I recorded my own voice as I walked around the microphone, maintaining a distance of about 300mm. By 90 degrees the level had dropped to a very small proportion of that at the front. Indeed, the sound seemed to be almost entirely room reflections rather than direct recording of my voice.

The acoustic guitar sound was detailed and very, very accurate. The sharp transients of the bells were well captured and, played back on my monitoring system, sounded extremely realistic.

With regular podcasting microphones the USB ADC is normally locked to a fixed frequency. With a microphone like this and a suitable interface – I used both a low-cost Behringer mixer/ADC with fixed 48kHz sampling, and an expensive RME Babyface Pro with sampling adjustable up to 192kHz – you can choose the best sampling to fit your workflow. I re-recorded the bells ringing with a clump of five of them in hand to get a good spread of high frequencies. 96kHz sampling ensured an extended measurement.

I wanted to see whether the 20kHz frequency response specified by Blue was a hard limit. Apparently not. The microphone retained an even level of high frequencies out to beyond 22,000 hertz, . Then it fell away fairly quickly. Nonetheless, the Blue Ember was still capturing actual signal out to just about 40,000 hertz. Hi resolution audio fans shouldn’t be disappointed.

At $189, the Blue Ember is an excellent, reasonably priced microphone for podcasters who wish to use their own USB interface. And it makes a very good microphone for recording both singers and most instruments. The capture pattern is tight, for good ambient noise control. The build is strong. And it looks pretty good.

The company website for the Blue Ember microphone is here.