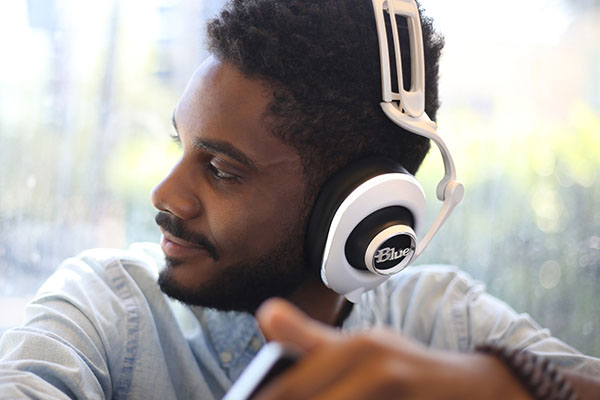 Anyone who has created a podcast has heard of the Blue Yeti. For others, that is not a colour-challenged Himalayan, but a high value for money microphone. It isn’t surprising that Blue also has a range of studio-style headphones. With the Blue Lola headphones it’s pushing directly into the high fidelity world.

So what is it. The Blue Lola headphones are kind of old-fashioned. They are a straight forward pair of passive, dynamic headphones. The large cups sit over your ears. A cable plugs into a source device. There’s no Bluetooth or built in amplifier or anything of that nature.

The Blue Lola headphones are amongst the largest I’ve seen lately, apart perhaps from a certain super expensive set we looked at a few days ago. They seem even larger thanks to an unusual headband mechanism. Instead of the cups sliding up and down on the ends of the headband to align with your ears, they’re on hinged arms. Those arms are attached to lower sections of the headband that connects to the top via a mechanism which ensures they maintain their angle.

This isn’t done just to be different. The point is to maintain the angle of the earcups. The usual headband changes the earcup angle according to how widely they are spread. Consequently, they are on a joint on the ends of the arms so that they can adjust. At least that’s the case with sensible designs. The earcups on the Blue Lola headphones don’t swivel around at all. The angle was nonetheless right for my head. The mechanism is, says Blue, “inspired by the finely tuned suspension of Formula One race cars”.

Because the earcups are large – and around 25mm deep – my ears weren’t contorted into odd shapes.  That in itself allows a more natural sound delivery, because your outer ears shape the sound you hear quite significantly. It also made them comfortable to wear.

The spring loading was perhaps a touch higher than necessary, given that you’re unlikely to be wearing these out on the street. Still, I found them fine for a couple of hours at a time.

Looks-wide, they spoke to me of the brand’s studio heritage. My wife didn’t like the styling. I did.

The Blue Lola cups provide a moderate amount of passive noise isolation. It’s more effective in the upper frequencies than in the bass, but these won’t be mistaken for noise cancelling headphones. What they do rather well is keep the music inside, so you won’t disturb anyone around you.

And because the sound is well-contained, bass performance is enhanced (bass is the first thing to suffer with leakage).

Inside each cup is a 50mm custom designed, fibre-reinforced dynamic driver. Blue rates the frequency response at 15 to 20,000 hertz. Their rated impedance is 42 ohms.

They weigh just short of 400 grams. Included is a soft carry case, two audio cables and a 3.5mm to 6.35mm gold-plated adaptor. That means you can use the headphones with older and higher-end audio equipment without further expense.

Both cables have 3.5mm plugs on both ends. I love that. Should they fail or you need, say, a ten metre cable, you can use any off-the-shelf one. The shorter cable has a control pod near the earcup end. That has three buttons for controlling volume and play/pause on an iOS device. The play/pause button also works on most Android devices. The controls work through the Lightening or USB adaptor provided with phones that lack a built-in headphone socket.

The Blue Lola headphones are available in either a black or white finish. Both have a chrome-look trim.

Listening to the Blue Lola headphones

Nice. I really liked the sound produced by the Blue Lola headphones. They were mellow and somewhat restrained in the lower treble, upper midrange. That gave them a smooth, pleasing feel. Not that they were without detail, or deficient in the high frequencies.

For example, when I was listening to the high resolution stereo version of Beethoven’s 7th symphony on a Teldec DVD Audio disc, I was reminded of a spurious high frequency noise – it’s at 11kHz – that unaccountably starts up around nine and a half minutes in.

But playing things like “Stan” by Eminem, the high frequency elements of the beat are controlled, not harsh on the ears. But the bass beat is strong and clean and quite extended.

Going back to classical, Schubert’s String Quintet in C was delivered with good presence, and smooth, sweet violins. The headphones gave a good sense of the intimacy of Laura Marling’s voice on Once I Was an Eagle, while the percussion was lively and uncompressed.

Blue doesn’t give sensitivity ratings for these headphones. Still, they seemed to produce plenty of sound from the available signal. I used them with a range of equipment, including a high resolution audio player, the Sennheiser HDV 820 headphone amplifier, an old iPad Mini, a Surface Pro, a Google Pixel 2 XL (via the phone’s included mini USB Type-C to 3.5mm analogue adaptor), and via four different mini-headphone DACs. Not once did I have to push the volume control anywhere near maximum to achieve a satisfying level.

The Blue Lola headphones are available at the usual electronics retailers. Go in and have a listen. You’ll likely be impressed. But take your significant other and make sure that he or she approves of how you look wearing them.