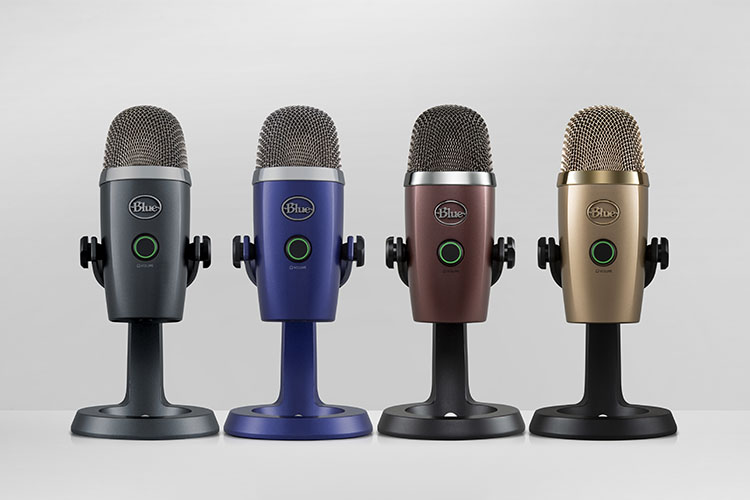 Do you Skype? Do you make podcasts or YouTube videos? Or do you ever need to record anything with your computer? Then you likely need a microphone upgrade. The Blue Yeti has been one of the go-to quality computer microphones for years. But now there’s the Blue Yeti Nano. It’s a little cheaper and quite a bit smaller, and it does a fine job.

The Blue Yeti Nano is a standalone condenser microphone with an integrated stand and a built-in headphone output.

Condenser microphones provide high quality, but typically require an external 48 volt “phantom” power source. They actually consume very little power, but the high voltage is required to charge up their capacitive plates. Well, all that’s built into the Blue Yeti Nano, along with an analogue to digital converter (and a digital to analogue converter for the headphone connection). And it comes with an integrated stand. The power is drawn from the USB port into which it’s plugged.

You can undo the thumb-screws holding the microphone to the stand and attach it to a regular microphone stand or boom. A screw adaptor is included.

Inside the microphone are two 14mm condenser microphone capsules. This is a recording-studio style microphone, so you direct sound at the face of the grill on one side, rather than at the end. The Blue Yeti Nano can operate with either a cardioid or an omnidirectional pattern. The former reserves most of its sensitivity for the front of the microphone and somewhat to the sides, very little at the back. Omnidirectional is of roughly equal sensitivity in all directions. A button on the back flicks between the two and indicator lights show which mode is selected.

At the bottom is a Micro-B USB socket and a 3.5mm headphone output. A cable is provided for plugging the digital connection into a computer. Both Windows and Macs are supported.

It’s important to understand how the signal is routed in any digital recording gear.

In normal mode, the Blue Yeti Nano sends the sound from the microphone to the computer in digital form. And it also sends it to the headphone socket. I don’t know if this is a direct analogue feed or if it passes through an analogue to digital then back to analogue set of conversions. You can cut this feed to the headphone by holding in the pattern selection switch for a couple of seconds. That way you will hear what your computer is playing, but not a direct feed from the microphone. In general, you’re going to want the direct feed. It seemed to have somewhere between zero and imperceptibly low latency.

The Blue Yeti Nano is available in four colours: Shadow Grey (the review model), Cubano Gold, Vivid Blue or Onyx Red. All are somewhat muted, so you don’t need to worry about red looking too lairy. The microphone seems to be well-constructed, with a thick mesh over the condenser capsules and a weight of more than 600 grams.

When I plugged the microphone into my Windows computer, it took about ten seconds to complete installation. The microphone is a USB Audio Class 1.0 device, so no drivers are required, even for older versions of Windows. The Windows microphone properties indicated that the microphone supports, as specified, sampling rates of 44.1kHz and 48kHz, both at 24 bits of resolution.

The microphone defaults to 48kHz sampling. If you do select 44.1kHz, the indicator light on the front changes from its usual green ring to a vaguely alarming amber pulse.

You’d be wise to install the free Blue Sherpa software on your computer. There are versions for both Windows and Mac. These allow you to set the playback level, change between Cardioid and Omnidirectional modes, and set the microphone gain level. That’s the level at which the analogue output from the microphone capsule is converted to a digital signal.

But I’m also interested in whether an ADC uses the full digital space available to it.

To work this out, I did some heavy-duty overloading of the microphone, forcing the waveform to clip at the hard digital boundaries. Occasionally some devices unaccountably fail to use the full digital scale available in mapping the analog input. But there’s no such problem here. My clipped recordings used the full range of 16.7 million levels in the 24-bit quantisation space. And it was a real 24 bits. The individual samples I checked were all in-between the 16-bit quantisation values.

The default level setting was pretty sensible, and was good for picking up the voice used at a conversational level, at a range of about 300 to 400mm. But it was easy enough to overload it with certain other sounds. For example, I rang my collection of small bells, and easily pushed the analogue output of the microphone hard enough to sound audibly clipped. So, I adjusted the microphone gain level in the Blue Sherpa software – there’s a level meter so you can see what’s going on – and brought the peaks down to under the hard limit. Then the tinkling assumed a delightful sound, without the hard clatter. Blue rates the overload level of the capsule 110 decibels. I’d agree. That will accommodate just about everything you’re likely to record. You just need to be ready to drag down the gain to make it fit into the digital space.

At the default gain setting, speaking into the microphone in the manner for which it was designed, the recordings were first class. The voice was extremely natural and well balanced tonally. There was some fairly good resistance to plosives. I could produce a bass thump with effort, but generally things were clear. I’d still use a decent pop screen, just to be sure. There was some proximity effect – greater bass with closer miking. The bass rolls off naturally so there’s some resistance to handling noise.

But, really, the only reason to touch the microphone is to change the pickup pattern, and you should do that before you start recording.

The differences between the omnidirectional and cardioid patterns were clear. There was little difference in sound all around the microphone when the former pattern was engaged. With cardioid, there was quite good rejection of noise behind the microphone. In general, the microphone will be used in this way. The omni setting is useful, though, if you want to record group conversations.

The recording of the bells I rang were quite instructive. First, there was clear overload. When I eliminated that, I took a look at the frequency spectrum of the recorded sound. The level was maintained all the way up the Nyquist point at 24,000 hertz. That’s unusual. Generally, ADC’s apply a steep low-pass filter as the frequency gets up near that point. You’d expect to see it kicking in, with 48kHz sampling, at perhaps 22kHz or maybe 23kHz. Here it seems to be absent.

Does it matter? These days I’m leaning towards the view that the potential artefacts that may be generated by treatment are inaudible anyway. I certainly couldn’t hear any problems.

One other reason for installing the Blue Sherpa software is that it keeps the firmware of your Blue Yeti Nano up-to-date. The review microphone needed an upgrade. Apparently the files aren’t large because the software did the whole thing in about fifteen seconds.

The Blue Yeti Nano is aimed solely at computer users: Mac and Windows. Phones aren’t mentioned. So, I figured I’d try it with a phone. I plugged it into a Google Pixel 2 XL (using a USB to USB Type-C adaptor), fired up the Voice Recorder app on the phone, and uttered a few phrases into the microphone. All seemed to work okay, but when I played back the recording, it played back much too fast and was full of static.

I suspected a sampling rate mismatch – the phone operating at 44.1kHz and the microphone at 48kHz. It took me a few different apps before I found one that worked well. “Hi-Res Audio Recorder” did the job nicely.

But how about an iPhone? I used the old USB Type-B to Lightning adaptor and the standard Voice Memos app, and it worked perfectly.

The Blue Yeti Nano really is a good investment for anyone using the computer to communicate with voice. Especially if you’re doing something where quality is important, such as recording. It’s surprisingly inexpensive and it works well.

Blue’s website for the Nano Yeti is here. Also see our coverage of other microphones from Blue here, here and here.