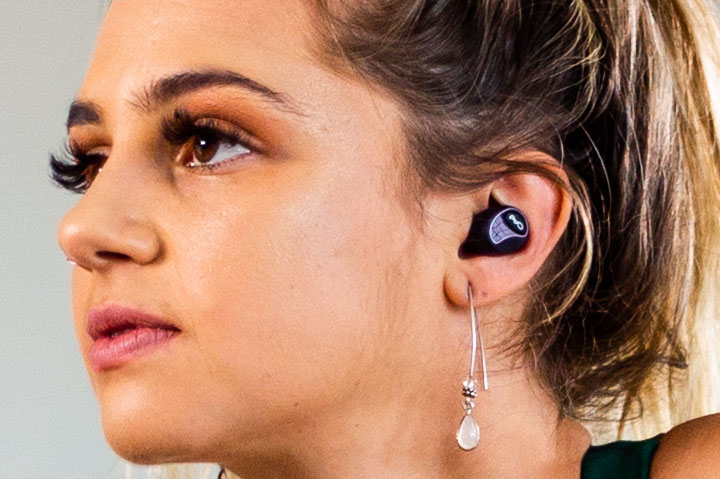 Melbourne company BlueAnt has been in the Bluetooth game for years. I personally owned one of those old hands-free single buds more than a decade ago. But these days we like stereo music, which brings us to the BlueAnt Pump Air 2 true wireless sports buds.

I’m sure you know by now how true wireless earbuds work. You know, two small, lightweight buds held in your ears, usually by friction. They run for a few hours on their internal batteries. When you’re not using them, you pop them in a small charge case which tops up the battery.

All of which precisely applies to the BlueAnt Pump Air 2 earbuds. But there are some differences from much of the competition.

First, the buds themselves are amongst the smallest I’ve used. Smallest and lightest. Each weighs only 4.2 grams according to my scales … and that’s with the largest of the silicon tips fitted. The case is also fairly light at 37.2 grams. The case vaguely egg-shaped, measuring 80mm on the longest dimension, 50mm deep and 33mm thick. It wasn’t very lumpy in my pocket. The sculpted nests inside the case for the buds are fitted with magnets that snap the buds into place with a satisfying click.

The case is charged via a Micro-B USB connection. BlueAnt rates the life of the Pump Air 2 buds at four hours, with the volume set at three quarters. The case can refill them three more times for a total of – well, fifteen or sixteen hours depending on which paragraph of the website that you’re reading. Four blue LEDs on the front of the case indicate charge level.

The buds are IP54 rated, which means that they’re sweatproof. They use 6mm dynamic drivers, provide handsfree use of your phone with two channel sound and employ Bluetooth 5.0 technology.

Despite the lack of wings or fins, the buds are so light and the fit so snug that I had no sense of a lack of security. Indeed, I went for a quite long bike ride and not once did I have to re-seat them. Even though during the occasional high-speed section there was fairly high wind noise, I was still able to hear the podcast that was playing fairly clearly.

There seems to be some nifty synchronisation technology in these buds. Occasionally something would interrupt the connection. Often it was my body. The buds worked far better with my phone in my right pocket than in my left, suggesting they sometimes found it difficult to pick up a Bluetooth signal weakened by passage through my body.

On resuming a stable connection, occasionally the left and right bud would be out of sync. But only briefly. Within a second or two they’d slide their timing smoothly so that they were back in sync. Note, it was a smooth adjustment, not a marked switch. It was kind of impressive. I don’t think I’ve experienced it like that before.

I can confidently say that the Bluetooth connection is made via the right earbud. I found that I could have a solid connection up to about forty metres away from my phone … so long as I kept the right side of my head pointed towards it. If my left ear was pointed towards the phone, then dropouts started at around ten metres. Bluetooth signals do not pass well through water and water constitutes a large proportion of the human body. Even the human head in this case.

There are two controls for the BlueAnt Pump Air 2 earbuds, a clickable face on each bud. It does the same on both sides, so the duplication just makes it easier for whichever hand is free. They can play and pause and skip forward and answer and hang up calls. They can even invoke Google Assistant or Siri. It’s just a matter of how many times you press the button.

I found these controls quite stiffly sprung, and so quite hard to operate. It took real concentration to get the three presses in quickly and reliably enough to bring up Google Assistant. But when I did get it right, it worked well. Likewise, the hands-free calling worked quite well according to people on the other end of my calls.

There is no special app for the BlueAnt Pump Air 2 earbuds.

According to my phone, there was no higher quality Codec available for connection with the BlueAnt Pump Air 2 earbuds, so it relied on the standard Bluetooth SBC codec. As I keep stressing, while the inclusion of things like aptX HD and LDAC is nice, it is secondary to the sound and tuning of the earbud drivers themselves.

And here BlueAnt has done a very good job. Even though they are fairly low in cost, the BlueAnt Pump Air 2 earbuds sound like they could well cost a lot more. The main standouts were a controlled, balanced treble and a surprisingly extended bass. The treble was moderately bright, but didn’t impose an artificial – almost painful it is with some – sizzle. Instead, a tonal balance somewhat like you’d hear in the real world was maintained.

Relatively wide dynamic range music like Thirty Seconds to Mars’ Love, Lust, Faith and Dreams was nicely handled, with the drum work standing out very properly from the main mix. The bass line was strongly represented.

Even, perhaps especially, with orchestral music the performance was strong. There was a certain smoothness to the delivery, avoiding harshness in strings. But bass drums were fully delivered, with a nice reverberant rumble.

Playing back Beyonce’s Lemonade again emphasised the solidity of the bass performance, the good precision on high frequencies, which were nonetheless delivered with decent restraint.

The BlueAnt Pump Air 2 earbuds are not only fine sounding, they are a bargain. I wish their buttons were a little easier to push, but that doesn’t deter me from making a positive recommendation on them

You can check them out on BlueAnt’s website here. They are available in three colours.