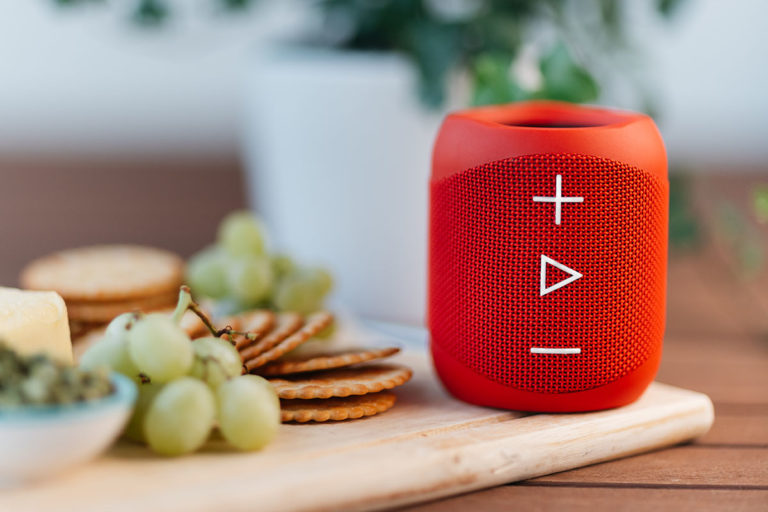 The BlueAnt X1 is similarly shaped to the X2, but it’s a stumpier version of the cylinder. Its diameter is larger at 89mm but its length is reduced to 104mm. It’s a fairly weighty cylinder at 405 grams. Weight in a speaker is a good thing, since heavy components are required for good performance.

Inside are two 40mm drivers, while on each end – recessed a little for their protection – is a 52mm passive radiator. The speaker has 14 watts of power on tap. Its internal battery is good for ten hours of operation, says BlueAnt. Four tiny LEDs indicate charge status when the BlueAnt X1 is being charged, and briefly whenever you switch it on.

It is charged via a Micro-B USB port which, along with an analogue auxiliary input, is protected from the elements by a sturdy rubbery plug. The whole thing is IP56-rated, which means that it’s well protected from rain and such, but should not be immersed.

On the back is a power button while on the front are prominent volume up and down and play/pause buttons.

The BlueAnt X1 feels solid in the hand. Its available in three colours: black, red and blue. It is fitted with a cord loop. It’s a bit too short to be called a wrist strap, but it would be useful to hang the speaker on something.

Pairing was straightforward using the usual method on my phone. You can only pair to one device at a time. To switch to a new device you purge the previous pairing information by holding down a key for eight seconds. Then it’s ready to pair again.

Once it’s paired, on both my Android phone and my iPhone, it put a small battery level icon on the notification line at the top of the screen so I could see the state of battery charge.

The volume keys double as track skip keys if they’re pressed and held. Double-press the play/pause key and you invoke Siri or Google Assistant as appropriate. The spring loading of the keys was just about right, in my view. They were sturdy enough not to be activated if you roll the speaker over, but they were light enough so that effective double presses were easy to master. You can also use the BlueAnt X1 for handsfree calling if you wish, although you first have to prime it with that double-press so that it’s listening for your voice.

When you switch on the BlueAnt X1, it announces the fact by making a didgeridoo sound, as is BlueAnt’s custom. After ten minutes without a signal, the speaker turns itself off to preserve the battery charge.

Listening to the BlueAnt X1

After holding my ear up to the unit, I determined that the drivers seem to be around ninety degrees apart on the circumference of the cylinder constituting the BlueAnt X1. One of them is on one side of the main controls, one on the other. If you put the speaker on its end with the “+” control at the top, the left and right speakers will be the correct way around.

But if you put the speaker that way around, the effectiveness of one of the passive radiators will be compromised. BlueAnt says that one of the features of the speaker is a “Stereo Spatial enhancement providing users the best seat in the house”. I can’t say that I noticed much in the way of stereo effect. I found it best just to consider it as a mono speaker and rest it flat so that both passive radiators can do their stuff.

Really, this thing is quite ridiculous. It produces a sound – and especially bass – well out of proportion for its diminutive dimensions. The first music I started pumping into it was some Billie Eilish. This music has very high levels of bass and with suitable speakers – my main speakers are good down to 20 hertz – there’s some truly gut-rumbling stuff there. There’s nothing gut-rumbling about it when played on the BlueAnt X1. Of course. But the speaker nonetheless delivered a sound that truly seemed balanced, fulsome and whole in the bass. The bass radiators on the ends worked pretty furiously. When I put my hand over one of them, I could feel it working on compressing and expanding the air in the enclosed space.

Occasionally there was a slightly hollow feel to the upper bass, as though it were producing a resonance in a mid-sized wooden speaker enclosure. Which it wasn’t, of course. Meanwhile, things like the finely tapped cymbal (from a synth, I think) was clean, precise and at the correct level.

This sort of stuff doesn’t come naturally. It’s the miracle of modern digital signal processing that allows a tiny speaker to sound so much better than it ought to. Here’s what BlueAnt says it uses to achieve these results:

Clearly, at least some of that stuff works.

Moving onto material less demanding of bass performance, the Dire Straits album Making Movies is sounding a little stressed as I’m writing, because the speaker is on a stand in the middle of the room, four metres away, and turned up to around the low-to-mid-70s of decibels, even at this range. Bringing it over to my desk, while retaining the same level, the output is measuring in the low-to-mid-90s of decibels. Backing the level down by ten decibels eliminates the stress, allowing a smooth tuneful performance. Drums are now solid and dynamic – albeit again with that slightly hollow sense due to a bass “resonance”. I’m imagining that BlueAnt has used the DSP to boost the upper bass to give a bigger sound than the speaker could otherwise manage.

I measured the output of the speaker and even though everything is only a little smaller than the X2, the performance was very different. You may recall that the X2 had a peak output just above 60 hertz, with almost nothing below that. Measured close to one of the passive radiators, this speaker has its peak at 110 to 120 hertz. It’s a hefty peak, too, which probably explains that sense of upper bass resonance. Below that frequency, the output falls away sharply, but not as sharply as with the X2. At that measurement position, the output at 75 hertz had come back into line with what it was in the lower midrange.

But in practice, don’t expect much in the way of effective bass below about 80 hertz. The third harmonic distortion level is higher than the fundamental at frequencies below 55 hertz.

Of course, it’s faintly ridiculous to be even measuring the performance of an $80 compact Bluetooth speaker. Except that the BlueAnt X1 is well enough engineered to deserve this treatment. I doubt you’ll find a better Bluetooth speaker in this price range. But if you can stretch to the extra $20, it’s probably worth going for the higher performance of the X2.

BlueAnt’s site for the speaker is here.