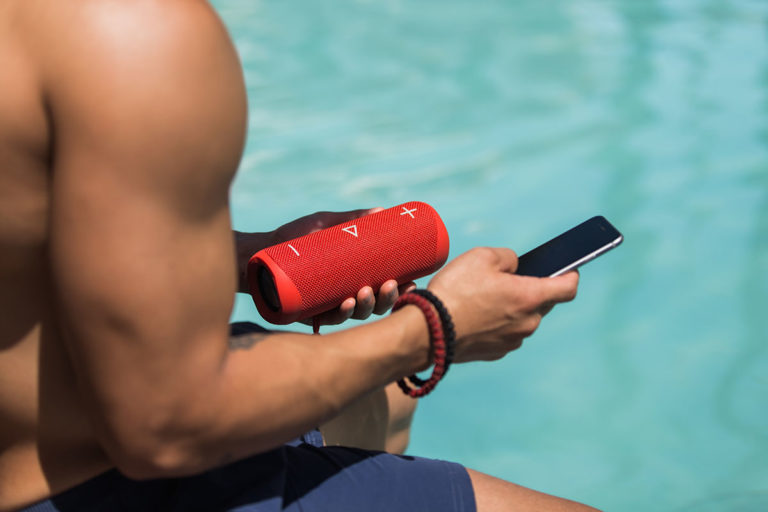 As I mentioned a couple of months ago in my review of the  BlueAnt Pump Air 2 True Wireless sports buds, BlueAnt is an Australian company based in Melbourne. The “Blue” part of the name makes it clear that it specialises in Bluetooth audio products. Which brings us to the BlueAnt X2 portable speaker, the subject of this review.

The BlueAnt X2 speaker is similar in styling to those from other brands playing in the genre. This is the larger of two models (we’ll be looking at the X1 in the future). It’s a cylinder about 72mm in diameter and 184mm long. The exterior is finished in a robust-seeming material with a slightly rubbery feel. It looks like it could take a drop or two. The points of maximum vulnerability are the ends. On each end is a 40mm metal-look passive radiator. These aren’t protected by a grille, but since they are recessed by the better part of a centimetre, and have a good 5mm of give, you’d have to be unlucky for something to puncture them.

The speaker is “splash proof”, being IP56 rated. The “6” means that “Water projected in powerful jets (12.5 mm (0.49 in)) against the enclosure from any direction shall have no harmful effects.” Note, that does not mean it’s safe from being fully immersed in water. That said, if you drop it in the drink and grab it out fairly quickly, all ought to be okay. On the back the Micro-B USB charge socket and the 3.5mm analogue input are protected by a rubber cover. The rear power control and the front volume and play/pause controls are all just marks on the surface of the unit, with their actuators hiding underneath its protective material. The front controls are large and boldly labelled as you can see in the photos.

The BlueAnt X2 speaker is available in black, red and … I’d have said purple, but BlueAnt calls it blue. It comes with a cord looped through a lug which you can use as a wrist strap.

Inside the BlueAnt X2

The BlueAnt X2 bluetooth speaker uses Bluetooth 4.2 for connection to your phone or tablet. Or, as implied above, you can feed an analogue signal in using the socket on the rear. A 3.5mm analogue cable is included in the box. The unit can also operate as a hands-free phone speaker since it has a built-in microphone.

There are two ten-watt amplifiers inside, along with two 45mm full-range drivers. These are roughly located where the “+” and “-” volume controls are. It will probably make no difference to anyone, since there isn’t much of a stereo effect, the two drivers being only ten or so centimetres apart. But if you are a stickler for the correct stereo sound, you should place the BlueAnt X2 speaker with the “-” to the left, or so my channel-check track indicated. In other words, have the wrist cord to the right.

I had planned to do this review while travelling, so after running a few quick measurements I topped up the charge and packed it into my suitcase. And there it remained for ten days. And then it returned to my review queue for another ten days. So I was pretty impressed that when I paired it to a phone, the phone reports 100% battery charge. That is, no power leakage over that three weeks.

The first thing that greets you when you switch on the speaker is the sound of a didgeridoo. Cute! Voice prompts let you know what’s happening. The pairing was straightforward. I paired the BlueAnt X2 with two different phones and in both cases, the connection was swift and sure. The connection used the SBC codec even though AAC, aptX, aptX HD and LDAC are available on my phones. Does that matter for a small Bluetooth speaker? I doubt it.

There are four LEDs on the back to indicate charge status. The unit takes a couple of hours two charge up – a charger is not included – and has a rated run time of up to twelve hours. It auto-powers off after ten minutes of no signal.

I did most of my listening via Bluetooth, but I also plugged a Chromecast Audio into the analogue input. It worked well. The analogue input takes priority over Bluetooth. The BlueAnt X2 switches over when the plug is inserted, regardless of whether there’s any actual signal. To roughly match the Bluetooth playback level you should advance the volume of a device such as the Chromecast Audio to 100%.

I initially listened to this speaker with it sitting on the desk beside me. It sits naturally with the speakers firing up at around 45 degrees from the horizontal. It’s frequently pictured as standing on one end, but I’d recommend against that. Why? Because it changes the operation of one of the passive radiators. And, indeed, the remaining exposed one. The BlueAnt X2 sounds good with both open to air. On its end, the grinding bass in songs like “Entre Nous” by Rush loses its bite and power.

In fact, Rush sounded remarkably good. The sound was clean at most volume levels. Even at maximum volume it was listenable. About 50cm from my ears, it was producing up to a bit over 90dB SPL (C-weighted) with music. Halfway across the room – say 2.5 metres away – the sound remained clean and with good bite. The same music was averaging around 70dB SPL. Not head-banger stuff, but respectable and easy to hear.

Importantly, the drums came through seemingly without any dynamic compression.

Leaving the speaker at that greater range, I played Nina Simone’s 1958 album Little Girl Blue. Her piano sounded remarkably realistic and the double bass was reproduced at an engaging level. I have to pause for a moment to note that this is ridiculous coming from such a small speaker. But it works.

There was also a certain unexpected airiness in the sound that resulted in a more natural feel to the music.

I measured the bass output of the BlueAnt X2 speaker. It was strong down to an impressively low 60 hertz. Ignore the upper part of the frequency response graph you can see hereabouts. I was interested in the bass performance, so I placed my Behringer measurement microphone up close to one of the passive radiators. As you can see, the output falls away below 50 hertz quite sharply. Sharper, in fact, than would be natural for a speaker design of this nature. The output is down by 18dB – inaudible, in other words – at 50 hertz. I’d say BlueAnt has put a filter in place to kill the deeper bass. That’s a wise move, since it allows the speaker to perform better in that 60+ hertz band.

The BlueAnt X2 Bluetooth  speaker is a remarkably good speaker, producing sound which belies its compact size. It is musical and engaging and works without any drama. I’m impressed.

There isn’t an official price for the BlueAnt X2 speaker on the company’s website. The purchase links there take one to Officeworks ($96.92 as I write) and Telstra (black model only, $119.88). I’d be visiting Officeworks, I think.