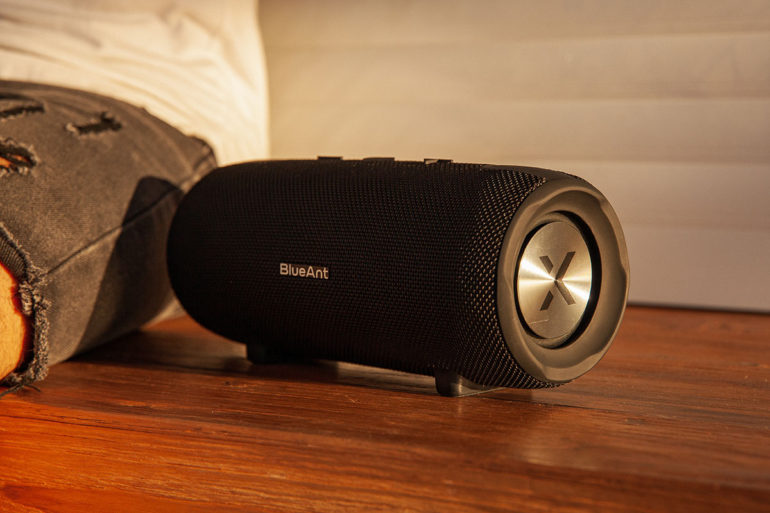 Australian-designed, built in China, the BlueAnt X3 Bluetooth speaker provides rather good sound from a smallish package at a quite reasonable price.

This is far from the first BlueAnt Bluetooth speaker we’ve reviewed. In all three previous cases, we’ve been impressed. Style wise, the BlueAnt X3 is like a larger version of the BlueAnt X2. Which is to say, it is a cylinder in shape, 230mm wide, with its ends around 130mm in diameter. Two protrusions on the bottom act as feet. On the top are three large push buttons for play/pause, volume up and volume down. There’s also a less obvious power button and another marked “B”, for bass boost.

At the back, under a silicone hatch designed to keep out water, is a 3.5mm auxiliary input, a USB Type-C charge port, and a USB Type-A connection for you to charge your phone, allowing the BlueAnt X3 to be used as a power bank. The three internal batteries have a total capacity of 9,600mAh and the speaker has a rated play time of fifteen hours. Charge time is three hours.

Inside the speaker are two 57mm drivers, about as widely separated on the front as the physical dimensions of the unit permit. The two ends are passive radiators to enhance the bass. BlueAnt rates the power output at 2 x 15 watts at 10% total harmonic distortion.

The speaker is available in any colour that you want, so long as you only want black.

As is the company’s practice, when you switch on the speaker it announces itself with the sound of a didgeridoo. But there are voice prompts which, to me, sounded more American than Australian. Pairing with an iPad was fast and efficient via Bluetooth 5.0. The speaker doesn’t support any advanced codecs, but for a device of this nature, SBC is fine.

An IP67 rating means the highest ingress protection against dust, and enough protection against water should you accidentally drop it in the drink. The BlueAnt X3 is rate at being immersed in water – that is, dropped in the swimming pool – for up to one metre for up to half an hour. That one metre depth should never be challenged since the speaker floats. That’s not a claim from BlueAnt. I’ve just now dropped the speaker into a bucket of water – while it was playing music – and yes it floated. And kept on playing. I pulled it back out, shook it, dried it off somewhat, and still it kept on playing.

The speaker automatically powers down after about ten minutes of no connection. But, note, it can still be connected to a device even though no music is playing. So you either have to switch off Bluetooth on the source device, or switch off the speaker manually. The latter simply requires a light touch of the power button.

The speaker also supports a Duo Mode, so that you can connect two of them together for joint playback. It was unclear whether they act as stereo left and right speakers in this mode or one simply duplicates the sound of the other.

As with the other models, the BlueAnt X3 performed quite out of expectations, given its size. Especially in the bass. As I’m writing this, I’m playing the 1981 hit record Vienna by Ultravox, streamed from TIDAL – my own physical copy is on vinyl, so not suitable for this test – to the speaker via an iPad. No, of course the BlueAnt X3 doesn’t deliver that open, you’re there with the original performers, feel to the music that true high fidelity can produce. But, hey, you need to toss at least, at the very least, ten times the $239 purchase cost of this product at your purchases to start to achieve that.

What it does give is a rounded sense of the music at a pretty intense volume. As Vienna plays, my sound pressure level meter, sitting on my desk in front of me, is indicating mid-70s in decibels of output, A-weighted. My office is fairly large. I’m sitting behind my computer, four metres from the speaker. That’s an impressive volume level.

Even more impressive is the sensible tonal balance of the speaker. Enough bass is either delivered, or at least suggested, to provide a satisfying experience. We’ll see later exactly how much bass the BlueAnt X3 can actually deliver. It turns out, a surprisingly impressive amount.

Subjectively, it certainly seemed so. There was a decent impression of bass – I’d have been quite happy with it, were I not familiar with the sound with my much-better other systems. For example, most of the middle to upper bass on Billie Eilish’s “Bad Guy” is delivered in full. You can notice on the lower notes that the level is also lower. (And if you have experienced this track with a full bandwidth, you’ll also notice the complete absence of some of the room-throbbing low frequencies.)

But I’m considering, there, ridiculous alternatives. This is a speaker which is small, portable, waterproof and battery-powered.

I did feel that there was something of a sharpness with the lower treble which pushed cymbals to a higher-than-natural level. This was apparent on the classical/rock fusion band Sky’s first album. But the cymbal prominence wasn’t uncomfortable, I’m merely noting that it was there.

Now, but this point you may have divined that I was pretty impressed with the performance of the BlueAnt X3 speaker. Right? Yes, indeed I was.

The bass boost function seemed promising, but I’d be little inclined to use it. It mostly boosted the 100 to 400 hertz regions by around three decibels, while doing little to extend the deepest bass. And that would no doubt come at a cost to battery life.

As that last paragraph suggests, I ran some measurements. Here’s the output up close to the front of one of the speaker drivers:

As you can see, the output was very even from the upper bass to the lower treble. That contributed a great deal to the musicality of the sound.

That measurement doesn’t really capture the contribution of the passive radiators, so I measured up close to one of them:

This shows that the passive radiators provide a useful contribution to the sound all the way down to 50 hertz. And that’s impressive.

There was indeed a peak in the treble, typically in the 6dB to 12dB range. But the frequency depended largely on the angle of measurement. Directly on axis, it was slightly north of 10kHz. At a significant angle it tended to be around 5.5kHz to 6kHz. The latter is far more audible.

The BlueAnt X3 speaker is a beauty for those who want a larger portable Bluetooth speaker for a more authoritative sound. And the nice thing is, it’s also rather reasonably priced.

BlueAnt X3 Bluetooth speaker (Review)
An excellent, larger Bluetooth speaker
Features
9.2
Value for money
9
Performance
8.6
Ease of use
8.8
Design
9
Positives
Remarkably big sound
Waterproof
Long battery life
Can use to charge phone
Negatives
Nothing that we can think of
8.9
Excellent!