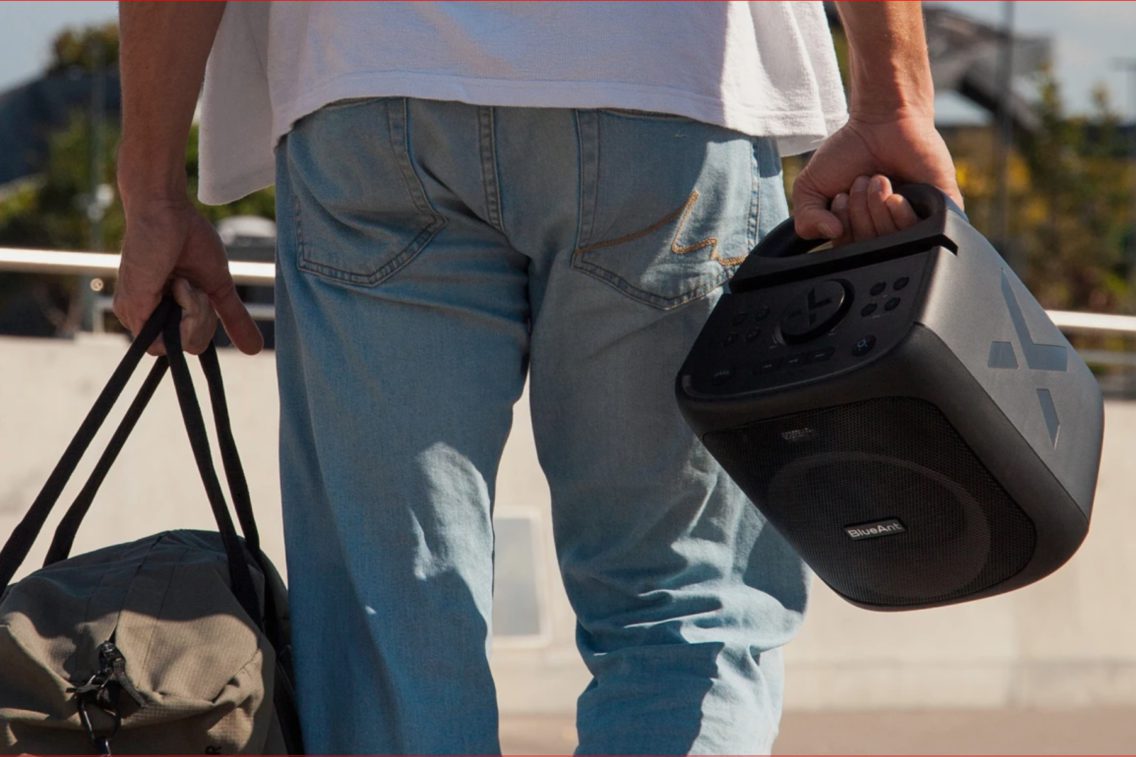 BlueAnt is an Aussie company, and the BlueAnt X4 hails from its Melbourne design studio. It is a 25W party speaker replete with a karaoke mic and LED party lights.

We have been pretty impressed with BlueAnt – serious Aussie know-how since 2004, meeting the big boy’s head-on with a range of performance speakers at fair prices. They are passionate music lovers and won’t compromise.

The BlueAnt X4 is at its best in PartyMode Playback, supporting 100 speakers. Otherwise, it is a Bluetooth, 25W RMS speaker that will brighten any party. Its bigger brother is the X5 9.3/10, and there is a smaller range X0, X1, X2 and X3 filing the portable BT speaker niche.

Slightly industrial feel, nice carry handle at the back, oversized ‘X’ volume wheel, and it is quite a deal lighter than expected at 240W x 235D x 250H mm x 2.48kg.

Why lighter? Don’t know as it has two 5000mAh batteries (in parallel for twice the battery life), 1 x 133mm Woofer, 1 x 51mm tweeter and a large bass vent – I was expecting quite a heft!

I noticed that BlueAnt doesn’t try to obfuscate the specs as many manufacturers do. It is all there

Although I noticed ‘50W‘ creeping in some advertising material – that may be PMPO as each speaker has a 12.5W RMS amp.

We tested battery charge and life over four weeks, and the specs are accurate.

Unexpectedly maximum volume on mains power and battery did not vary – we tested 85dB.

There was harmonic distortion, and BlueAnt quote 10%, so be prepared to back off the maximum volume a few clicks.

BlueAnt quote 75Hz-20kHz, and it has a bass boost button (on or off). The button does not increase bass so much (see chart below) but slightly recesses the treble that would otherwise sound harsh.

The frequency response (white noise) chart below is awesome for this speaker – strong mid-bass and then flat from 75kHz to almost 10kHz, then a gradual drop. This speaker neither adds nor subtracts from your music.

This is a forward-firing speaker. If you place it at ground level, only your feet will benefit. It is best on a desktop. There is no tripod mounting socket.

But we found significant bass differences when close to the junction of two walls – the bass can bounce off the walls and reverberate outwards.

It is a $25 unidirectional mic, with surprisingly solid construction with a metal barrel and pop filter. I think karaoke may be pushing it as maximum volumes are not high enough to disguise lousy singing.

There are five modes plus off. LED light usage will reduce battery life by about 30%.

It is nearly half the price of JBL’s louder and more sophisticated PartyBox on the Go but sound-wise, it is pretty much a match. There is no better sound at this price.