Borderlands coming to PlayStation 3 and Xbox 360 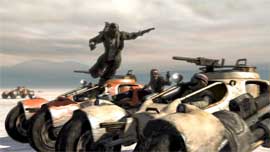 2K Games have announced that it will publish Borderlands?, the latest release from acclaimed developer Gearbox Software, for the Xbox 360? video game and entertainment system from Microsoft, PLAYSTATION®3 computer entertainment system and Games for Windows®. As the first title in an all-new sci-fi action franchise, Borderlands combines the best elements of Gearbox Software?s famed first-person action titles with player customization and vehicular combat to create an unprecedented gaming experience.

Borderlands will be available LATE 2008 for PLAYSTATION 3 system, Xbox 360 and Games for Windows®.