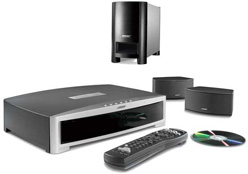 Sometimes, smaller is better. Not everyone wants a full-sized home theatre set-up, whether it’s for lack of space, or purely aesthetics. While a multi-speaker surround sound system will certainly add a new dimension to watching movies and listening to music, sound quality doesn’t have to suffer on a system with less than five speakers. Bose’s 3.2.1 GSX DVD Home Entertainment System is a case in point. It’s small, simple, has just two speaker arrays and a sub-woofer, but performs like a much bigger system.

By size alone, you’d probably never guess that the 3.2.1 GSX is so capable. It’s an AM/FM radio, CD and DVD player, plus the 3.2.1 GSX incorporates a 40GB hard disk with the capacity to store approximately 200 hours worth of CD music. Considering this, the 3.2.1 GSX might be better described as a ‘media centre’ than a home entertainment system.

The base unit is sleek and minimalist in style, and connects to two small Gemstone speaker arrays and a large sub-woofer, called an Acoustimass module. The three speaker elements are designed to work in tandem with Bose’s TrueSound surround digital processing circuitry and Videostage 5 digital decoding technology to create a ‘field of sound’ similar to 5.1 speaker systems. Dolby DTS is also supported, plus Bose’s Videostage 5 can create room-filling sounds from any audio source including VHS, mono TV or CD. The system also plays CD-R/RW, SACD, MP3 CDs, VCD, and DVD+/-R/RW. One thing it won’t do however, is import MP3 music or DVD movies onto its hard disk. Bose uses its own audio compression technology for converting CD music to digital audio, so unfortunately, if you already have your music collection on MP3 or another format, you’ll have to covert it to CD-audio and import it this way.

Once imported to the hard disk, listeners can use Bose’s ‘intelligent’ playlist generator. Called uMusic, this ‘learns’ your musical tastes and plays what it thinks you’ll like. It does this by noticing the songs you listen to completely, the ones you skip, and with the special ‘+’ and ‘-‘ buttons on the remote control, you can indicate whether you like a song or not. uMusic also uses information from a database of about 500,000 songs to apply album, artist, genre and track names to your imported CDs without connecting to the internet. In addition to this data, other variables, such as mood, tone and a musician’s roots and influences are used to help profile your tastes.

uMusic supports up to nine different presets, so other people in your family can enjoy listening to a playlist customised to their listening habits.

There’s also a regular playlist option, where music can be added to groups by holding the ‘Playlist’ button while listening, or selecting content based on an artist, album, genre or track.

In addition to uMusic and playlists, you can jump to a stored CD, chose individual tracks and, with the special Encore function, tell the system to play all songs that most closely resemble the one you are playing.

Fortunately, the 3.2.1 GSX is designed to be easy to set up and configure. A quick visual guide is included, along with a DVD that steps you through the rest of the configuration, once you connect the TV. Bose also keeps the speaker cabling as simple as possible, with one connection running to the subwoofer, and from here, a single cable splits in two and runs to the other speakers.

There’s a fairly extensive set of audio and video connectors at the back of the unit. RCA-audio, coaxial and optical digital audio inputs are provided as well. S-video and composite video inputs and outputs are present for connecting video devices such as VCRs, set-top boxes and games consoles. There’s a single component connector for high-definition TVs, plus a Boselink connector, which links the 3.2.1 GSX to other compatible Bose devices for multi-room audio.

While there are a few buttons on the top of the 3.2.1 GSX unit – power, storing CDs, volume and operating the CD tray – most of the functions are controlled via the remote.

This works in conjunction with the 2-line LED display, or you can view the system settings and contents of the media archive with your TV and the on-screen display. The remote itself is quite solid and not overcomplicated. Direct-function buttons are included to use with the uMusic system, such as playing songs that are similar to the one currently played.

The remote can also be programmed to control your TV, set-top box or VCR, negating the need for a handful of remotes. While a large database of devices and remote control codes are stored in memory, my relatively obscure Vizio P4 plasma TV and more popular Topfield TF5000PVRt digital set-top box were not recognised.

When you first hook-up the 3.2.1 GSX, some time will be needed for importing your CD library. Each disc takes about five minutes to copy and install, or about 10 discs in an hour. If you have a large collection of CDs, you’ll need to budget some time to import your collection. Once stored, you can delete the songs you don’t like from the onscreen menu and remote control.

When it’s all connected and up and running, the 3.2.1 GSX really is a joy to behold. First of all, it looks good – the elegant speaker arrays are small and compact, and the media centre unit itself only takes up the space of a DVD recorder. The subwoofer, which is quite large, can always be stored out of sight.

Sound-wise, again, the 3.2.1 GSX impresses due to the sheer amount of depth and volume produced from such an unassuming and tidy unit. DVD movie playback on Dolby DTS is indeed impressive, with thundering bass and crisp tones, while audio CDs stored on the hard disk sound nearly as good as those played directly off the CD. Information on the compression technology used, or indeed the ability to control it, doesn’t seem to be a Bose option, however. Nor is the ability to import existing digital music, like an iTunes library, which limits you to the slow CD import method.

The 3.2.1 GSX is a premium product, and tops the 3.2.1 range, so it’s not priced anywhere near a home-theatre-in-a-box that you’ll find in Dick Smith’s Powerhouse. However, you won’t find this level of performance there either, or the clever uMusic features, hard disk storage and compact, elegant styling. For those living in units, or image conscious spaces, the 3.2.1 GSX is even more at home.