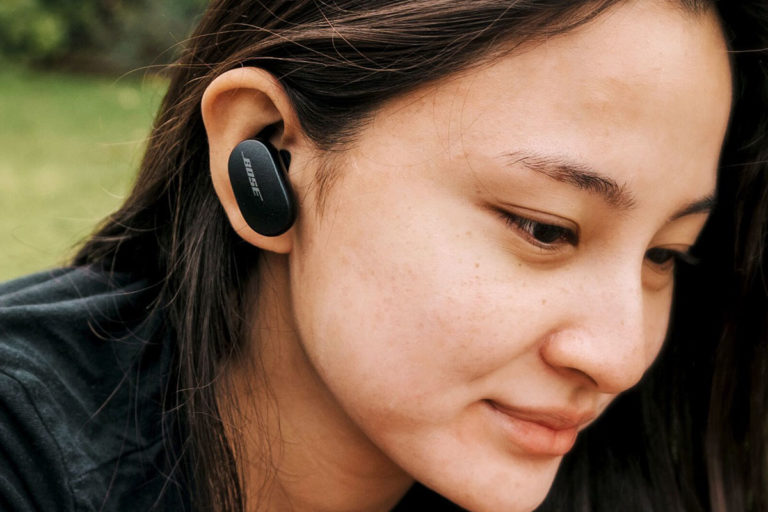 We’ve done a deep dive on Bose earphones in the past, and we were impressed. But one of the things Bose is known for is active noise cancellation. Those earphones did not have it. But the nice new Bose QuietComfort Earphones do. Let’s check them out!

About the Bose QuietComfort Earphones

The Bose QuietComfort Earphones follow most of the norms in this field: compact buds with a charger case. The case is middling in size as these things go: 88mm on the longest dimension, 52mm and 35mm on the other two. Rather than just lifting up the lid, you press a button on the front to release the spring-loaded opening. There are five small white LEDs on the front to show you the level of charge in the case.

Speaking of which, the buds enjoy of a life of up to six hours while the case can fully recharge them twice. Fifteen minutes in the case gives the buds two hours of playback. Bose is using a USB Type-C connection for charging, but it goes a step up from that.

The Bose QuietComfort Earphones are only the second set of earbuds I’ve reviewed with the obvious enhancement of Qi wireless charging. I just pop the case on the pad next to my desk, and the charge starts pouring in.

That said, I didn’t end up doing that very often. The fairly long life of the system meant that I went for several days before needing to charge it up.

The buds have smallish wings which served to lock them very securely into my ears, and the mid-sized silicone tips provided a very good seal with no ado. One larger and one smaller are provided in the box.

The Bose QuietComfort Earphones have active noise cancellation, to which I will return. They employ Bluetooth version 5.1 and offer a claimed range of up to 9.114 metres or 30 feet. Obviously the metre range is a naïve conversion from the imperial one. I’ll jump in early with the results of my standard walk-away test. Sorry, I didn’t get a little over nine metres. No, I got pretty much spot on forty metres! Connection reliability was simply excellent.

While on practicalities, a few notes. If you take one bud from your ear, playback pauses and the remaining bud switches to play-through mode. That is, it does its best to become acoustically invisible, using its microphones to pass through ambient sound.

You control the buds using the tap sensitive surfaces. Two taps on the right for play/pause. Tap and hold on the right for voice assistant. A slightly programmable tap and hold on the left and you can skip tracks or hear the battery level. Double tap on the left and you cycle through three levels of noise cancellation … there are ten available! You can choose the three settings. Note, the zero level or noise cancellation sounds like it’s actually in play-through mode.

Now, double tapping is also a Sony style of control, and the one thing I really dislike about Sony Bluetooth headgear. What’s wrong with a single tap?

That said, it worked fairly reliably.

The SBC and AAC codecs are available. There’s no aptX or LDAC or such. You can configure things using the Bose Music app on your smartphone, but there’s no EQ adjustment.

The sound was interesting. I found the Bose QuietComfort Earphones a good comfortable listen. Let’s say a decent B+. They are very strong in the bass – strong in a good way. It was clean and controlled, if a little louder than perfectly balanced. That’s nothing new for Bose earphones and headphones and is preferred by a lot of listeners. I must say it was nice to get a really solid thump from the kick drum. I found the midrange and lower treble a little rougher, just a trifle harsher, than the very best in the field. Nonetheless, the music was enjoyable.

The tracks on Marillion’s Script for a Jester’s Tear enjoyed that solid kick and a good biting lead guitar but seemed to lose a little midrange detail and just slightly lacked a full presence.

Who’s Next exhibited a recording quality rather better than you’d typically expect for a 1971 recording. Gosh, fifty years old next year! Through the Bose QuietComfort Earphones, Moon’s drum kit had an interesting, and slightly different tone, as though the upper frequencies were slightly muted. But the dynamics were excellent, making them very easy to follow. For a satisfying playback level I had to max out the volume. I’m guessing that’s due to silly Euro-regulations. And that means the actual maximum volume you’ll be able to enjoy depends on the encoding level of the source. Which can be highly variable.

It turned out that I best enjoyed When We All Fall Asleep, Where Do We Go? by Billie Eilish, the Master version streaming from TIDAL, at maximum volume. Again, there was that slight pinching in the upper midrange, and the super deep bass wasn’t quite as present as I’d expected. Nonetheless, an enjoyable listen.

I’ve generally been disappointed with the efficaciousness of active noise cancellation in earbuds. The best so far has been the Audio-Technica Quietpoint ATH-ANC300TW buds. But even they don’t come close to the Bose QuietComfort Earphones. I was listening to the aforementioned Billie when it came time to cancel some noise in a fairly controlled setting. I paused her playback, dialled up my NAS where I keep some good on-plane noise samples – of course, actual flying is out of the question at the moment – and set it playing.

It was the weirdest thing. My abdomen was being pummelled by bass noise. I could feel it! But I could only hear a mere ghost of it. There was just a bid of midrange noise. The clip came to an end, so I restarted it and the weird sense resumed. There’s a lot of truly deep bass in this clip … and none of it was making it to my ears. Did I mention that I set the playback level to an average of 100 decibels, C-weighted?

This is killer stuff. I was almost frightened to see what a double tap on the left earbud would reveal. The noise was more realistic, although still relieved of most of its bass content. The music way overpowered the noise when I started it up. I double tapped on the left earbud again, to turn the noise cancellation down, so the system implies, to zero. The pounding against my body disappeared because my brain had integrated it with the noise received by my ears. That noise was fuller and louder and slightly more mid-rangy that it was with the earbuds out of my ears.

Over every earbuds I’ve ever tested, that’s for sure. They have a simply excellent battery life, decent-enough sound and a surprisingly middling price. Check them out.