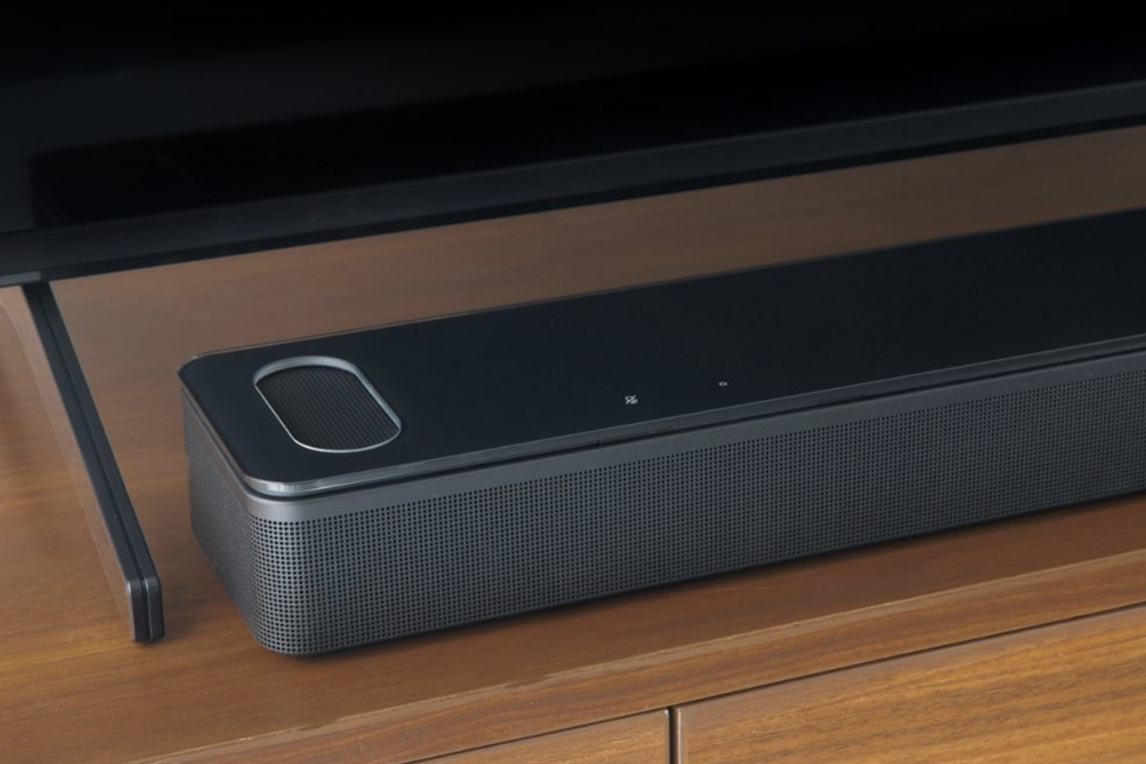 Supporting Dolby Atmos and packed with streaming features, the Bose SB900 soundbar aims to give your lounge room an audio overhaul.

While today’s 4K and 8K televisions deliver a stunning picture, their super-thin design means they can be found wanting when it comes to sound quality. That’s where it pays to upgrade to a sound system which helps bring movie night to life.

Of course, not everyone has the budget or the space for a true “surround” sound system with speakers spread around the room. The compromise is a soundbar which sits below the screen to deliver bigger, bolder sound.

The SB900 is Bose’s first Dolby Atmos-capable soundbar, letting you get the most from the high-end soundtracks on Ultra HD Blu-ray discs and some streaming services.

Along with the ability to throw sound around the room to create a wide soundstage, it also features upwards-firing speakers to help recreate Atmos’ sense of height and deliver more immersive sound.

The Bose SB900 soundbar sports a surprisingly slender design for one which packs in so many speakers. At only 5.81 cm tall, it can likely sit on the bench in front of your television without blocking your view of the screen. Alternatively, you can mount the soundbar on the wall, below a wall-mounted screen.

The clean design includes a glass top which features touch-sensitive buttons so as not to spoil the look from the front. The upwards-firing speakers are also subtly inset so as not to draw attention, ensuring it doesn’t look out of place in your lounge room.

There’s a thin LED light bar below the buttons which indicates the status of the soundbar with a confusing array of colours and patterns. It doesn’t act as a power light, assumingly so as not to distract you from your movie. There are times when you can find yourself wishing for some kind of front display, such as the volume level or which audio source is selected.

At the back, you’ll find indents which place the inputs on a 45-degree angle rather than pointing straight back – making it easier to mount it on a wall or push it back against a television base without the protruding cables getting in the way.

One disappointment is that there’s only a single HDMI port on the back, along with digital optical. This is fine for running audio from your television to the soundbar via eARC HDMI cables, but some people might prefer a second HDMI port as a pass-through so they can run sources like disc players into the soundbar and then run the picture out of the soundbar to the television.

There’s also an Ethernet port on the back, accompanying built-in Wi-Fi, to support the soundbar’s wide range of streaming features which make it easy to fling audio around your home.

While the soundbar looks quite elegant, the remote control is rather basic and clunky. That’s in part because many of the soundbar’s advanced features can only be accessed via the Bose Music smartphone app (iOS/Android), which is required to set-up the soundbar before first use.

The app can link to a range of streaming services including Spotify, Amazon Music, Pandora, TuneIn, Deezer and iHeartRadio.

Acknowledging it’s limited access to advanced features, the physical remote sports six preset buttons which you can configure to play audio from your favourite music services without the need to reach for your phone.

The soundbar’s initial set-up includes calibrating the speaker to the room using Bose’s ADAPTiQ technology. Different vendors approach this in different ways. Some units have built-in speakers to listen to the acoustics of the room, while others come with an external speaker which connects by cable and can be placed around the room. Some Sonos units require you to do a rain dance with your phone to capture the acoustics of the room.

With the SB900, Bose supplies a headset which connects to the soundbar via a long cable. The set-up then instructs you to sit in different places around the room, wearing the headset, so it can hear what you’ll hear and adjust the audio characteristics to suit.

If you want to bump up the sound, Bose offers an optional subwoofer for $949 and optional rear surround speakers for $529. Of course, by the time you’ve spent all that, you might have been better off looking at a true surround sound system.

Within the app you can access a two-band EQ, along with control of the centre channel and height channel. There’s also dialogue boost mode, which is handy at night so you don’t need to constantly ride the volume in an effort to hear the dialogue without waking the household during the noisy scenes.

When it comes to enjoying movies and TV shows, the Bose SB900 soundbar is designed to support up to Dolby Atmos sound – thanks to nine speakers precisely arranged in the cabinet.

Bose’s PhaseGuide psychoacoustics technology helps bounce sound around the room to create a sense of surround sound, but it naturally can’t trick you into thinking there’s a speaker behind you.

One of Dolby Atmos’ strengths is a sense of height, although it’s obviously not as impressive from an upwards-firing soundbar as it is from a true surround system with speakers in the roof. When you’re not listening to an Atmos soundtrack, Bose TrueSpace technology remixes stereo and 5.1-channel sound to recreate that sense of height. There’s no way to disable this, which could frustrate purists.

The lack of DTS support, downmixing to PCM 2.0, also might frustrate some people, depending on what’s in your video library. Many Blu-ray movies don’t offer 5.1 Dolby Digital sound. Instead, they feature a 7.1 DTS-HD soundtrack which, on a DTS-less sound system, leaves you listening to upscaled 2-channel sound.

The soundbar also has a lot to offer music lovers, with support for Chromecast, Apple AirPlay 2 and Spotify Connect streaming from devices around your home such as smartphones, tablets and computers.

There’s also two-way Bluetooth support, letting you connect your devices to play music or connect Bose Bluetooth headphones to listen to music or sound from the television.

That internet access is also put to use supporting Google Assistant and Amazon’s Alexa. You can either call on them with their wake phrase or press the button on the top of the soundbar to get their attention – which seems inconvenient considering that most home entertainment gear has a wake button on the remote control. There’s also a mute button on the soundbar when you want your smart assistant to stop listening.

Bose Voice4Video technology expands Alexa’s voice capabilities. In addition to controlling the soundbar, she can also control your television and connected devices.

Out of the box the sound is a little underwhelming, but ADAPTiQ calibration helps bring it to life with more full-bodied sound. The bass still feels a little underdone on the default settings, but you can bump this up to suit your tastes.

The Bose SB900 soundbar delivers an impressively wide soundstage, but the sense of height is less pronounced than rival Atmos soundbars such as the Sonos Arc, Samsung HW-Q90R and LG SL10YG. You can also adjust the height settings to make the effect more pronounced, which only makes a slight difference.

The soundbar does a great job with Dolby Atmos soundtracks, keeping everything tight in the moving car fight scene in Deadpool. When it comes to Atmos’ sense of height, the B-24 bombing raid in Unbroken isn’t as impressive as I’ve heard on other high-end Atmos soundbars.

The quality gets a little uneven when you’re listening to 5.1-channel audio and relying on BoseTrue to extrapolate, such as the foyer fight scene in The Matrix. It can get a tad murky in places. BoseTrue’s attempts to add a sense of height are most noticeable when it comes to high-end sounds like breaking glass and bullet shells hitting the ground.

When it comes to music, the SB900 can hold its own but sounds a tad bright if you favour the richer sound of its Sonos rival. It performs admirably with nuanced music like acoustic guitar and jazz, but can get a tad murky in the middle when hard rockers take the stage.

The Bose SB900 soundbar ticks a lot of boxes, especially if you’re already a Bose fan and own Bluetooth headphones which will connect to the soundbar. It looks great in your lounge room and it’s packed with streaming features for flinging music from your various devices.

The soundbar does a fine job with Atmos soundtracks, even though that sense of height isn’t the best in the business when it comes to soundbars with upward-firing speakers. Make sure you weigh it up against the Sonos Arc, especially if you’d make the most of Sonos’ more extensive multi-room ecosystem.

Maybe, but only if I was sure the Sonos Arc wasn’t right for me

Bose SB900 soundbar: listen up (review)
Adding Dolby Atmos and a range of streaming features to your lounge room, the Bose SB900 soundbar is the full package.
Features
9
Value for money
8.5
Performance
8.5
Ease of use
8
Design
9
Positives
Dolby Atmos
Chromecast/ AirPlay 2/ Spotify Connect
Two-way Bluetooth
Negatives
Sense of height not as impressive as some
Limited remote, over-reliant on smartphone app
Only works with Bose headphones
8.6