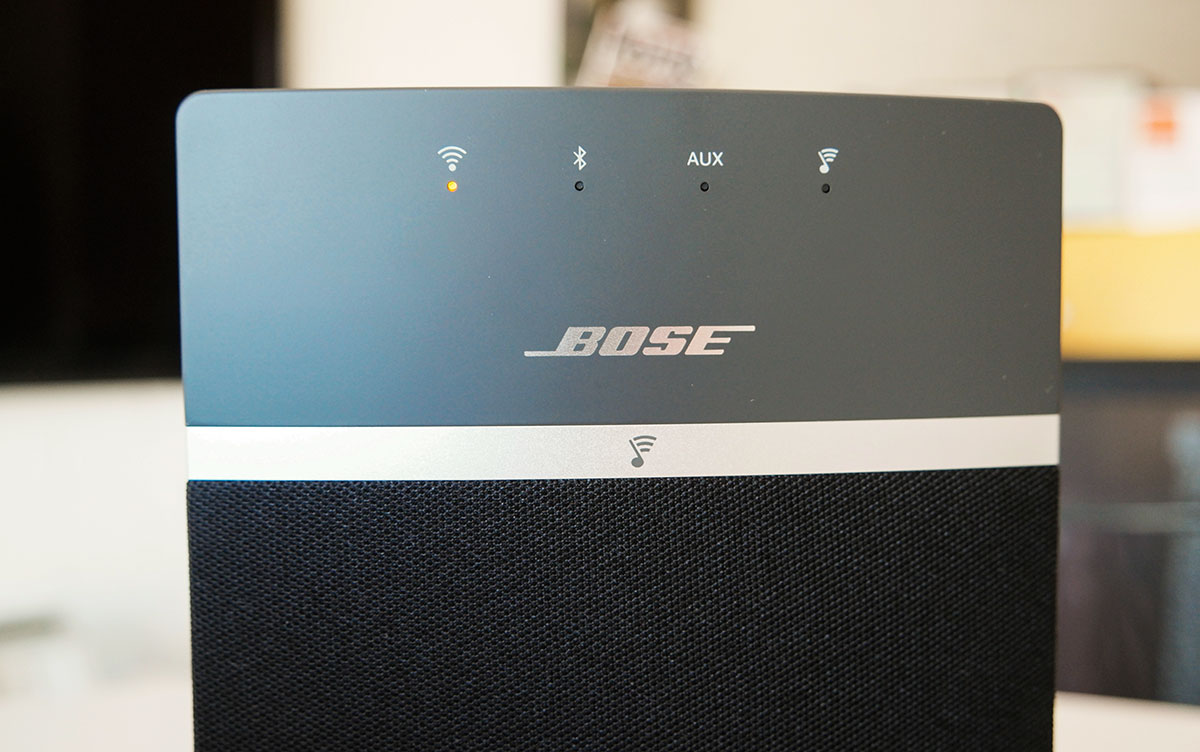 The next area to get attention in the sound world isn’t big headphones, though we love those too. No, it’s multi-room, and while Sonos may well dominate, Bose is looking to make a dent even in the entry level.

When you think of multi-room, it’s hard to go past the juggernaut that is Sonos, a player that literally started the idea of synchronised sound across an entire home, with the other typical sound players arriving a little later.

Samsung was late, and Sony was late, and even Bang & Olufsen was late to this party, as was Bose, which spent a long time researching a way to deliver its own take on the concept, which we’re seeing now in the SoundTouch.

For Bose, SoundTouch is about creating another deliciously friendly several room music service that can work across the Bose line-up of products, with the concept appearing in most of what Bose releases today.

It’s in soundbars and Wave music systems, and now it’s even in small speaker boxes that you’ll leave plugged in at a corner of your room, which is precisely what the SoundTouch 10 aims to be.

The entry level baby of the bunch, the SoundTouch 10 is a Bluetooth-equipped WiFi-ready speaker that takes its power from the wall and lets you connect to it using an app on Android or iOS.

You’ll need that app not just for control, but also for setup, but that’s not the only way to control the SoundTouch 10, with controls on the very top of the speaker, as well as on a remote that comes with the speaker.

Once it has been setup, you’re free to play music from your home network or internet connection, or even over Bluetooth if it suits you, and you’ll find a lot of volume, that’s for sure.

Testing it with the GadgetGuy 2016 sound test, we found the strength was pretty much across the board, with solid balance across the mids and highs, and a solid boom on the bass.

In the electronic music of Imogen Heap and Demi Lovato, not to mention a bit of boom from the modern disco that is Daft Punk, the speaker delivered a good punch that overtook the mid-range, though it was still quite clear that the highs were apparent in the track.

Modern tracks engineered for bass — like Mark Ronson’s “Uptown Funk” and The Weeknd’s “Can’t Feel My Face” — demonstrated that the speaker certainly pushes the bottom end hard when the track calls for it, and while we’re used to seeing strength in balance from Bose, it’s clear the bass is the leader here.

Perhaps this is because the SoundTouch 10 is technically a mono speaker, compared to the stereo omni-directional speakers the likes of which Ultimate Ears and Samsung have been working on, as we suspect Bose has pushed the bass a little more so it’s harder to pick up on the lack of spatial separation.

That’s the thing with the SoundTouch 10: there’s not a lot of soundscape here, so don’t expect the perfect recreation of that live album, because it will all sound like it is being delivered out of one speaker, which it is.

What you can expect, however, is a lot of volume, because it fills a room with no problem whatsoever.

In rock, we found a clear and gutsy sound for Radiohead’s “Exit Music”, while the boy-like charm of Ben Folds rang through on his “Phone In A Pool” before delivering a gutsy bass-filled execution of Muse’s “Psycho”.

That sort of balance gave us a good sign for things to come for jazz, which lets us test the subtleties of the speaker, and when Miles Davis and Dave Brubeck came on, we felt a clear warmth from the two test tracks (“So What” and “Take Five”, respectively), with distinct horns and drums, and just enough clarity on the keys.

Basically, the response from Bose’s SoundTouch 10 is fantastic, and while the speaker is small, it sounds much bigger than what it looks like, resulting in a pretty solid burst of sound no matter what type of music you pump through it.

Unfortunately, getting music to the speaker isn’t the best of experiences, and while Bose is in control of its audio experience, it doesn’t quite exert the same level of excellence in the app department.

For starters, to use the speaker, you actually have to connect with it on WiFi and register with Bose, making an account for the SoundTouch system.

Never mind if you want to use the SoundTouch 10 merely as a Bluetooth speaker, because you still have no choice. We tried that and it still forced us to connect using the app, even though it should support Bluetooth out of the box.

In theory, the speaker does, but you can’t turn Bluetooth on for pairing until you go through registration, which is a little surprising. In fact, for a good ten minutes, we struggled to even see the speaker on Bluetooth from our phone.

When you eventually go through that process and sign up, you’ll find Bluetooth works, but that seems to be the only way to play the music found on your device. At least, that’s the way it was for our Samsung Galaxy Note 5, because while Sonos and Samsung offer file support for their multi-room products, the Bose app merely offers file access from a network drive or from a small amount of music services.

And when we say “a small amount of music services”, we’re not joking.

Specifically, there are three plus internet radio: Deezer, Pandora, and Spotify.

Too bad if you have Google Play Music, Apple Music, Tidal, 8Tracks, Soundcloud, Samsung Milk, JB HiFi Now, or a subscription to Concert Vault, because there’s only support for the three mentioned before. It’s such a small amount of supported playback services, it feels like Bose is new at this, so we’re a little shocked.

In any case, we went with Pandora for one of our tests, which worked well enough, and let us do the whole thumbs up, thumbs down thing for music, with the app even showing us why the song was picked.

And it’s a good system, for what it’s worth, because while service selection is downright poor on the Bose SoundTouch, the service experience is not, with Bose getting one part of that balance right.

Saying that, the company desperately needs more services, and a connection to let you play music from the phone, because on Android, that only happens over Bluetooth, which is how we tested the speaker quality.

One benefit Bose’s SoundTouch does bring to the table is a gimmick only Bose really does, and it’s a neat gimmick all the same: presets.

Remember when radios had numbered presets? Well Bose is continuing that tradition, offering up to six presets connected by one of the music services in its app.

Once you know which one you wish to turn into a preset, you simply hold it down in the app and add it as a preset, which writes itself to the device. From there, when you press the number on either the remote or the actual unit, and your preset will kick in, delivering the station you programmed without needing to open the app (once programmed).

The presets even remember when you left them, and after programming a Pandora station as number “5”, we switched over to Bluetooth and listened to our own music for an hour. When we hit that “5” button again, the music kicked right back from where we left it, meaning the song we had listened to before was playing again.

Neat, and that’s something Sonos won’t always do. Often when using a Sonos, we’ve gone right back to a Pandora station only to have the station renew its link and start with a different track.

We can’t say this will work for everything on the SoundTouch, mind you, because we can’t see radio remembering your position since radio changes and updates every second.

Beyond a mediocre setup process and an app that lacks services, the Bose SoundTouch 10 is actually a solid start for Bose in the multi-room space.

There’s no doubting that the app experience needs work, and we shudder to think why a speaker needs to be registered to a service if you only want to use it as a Bluetooth device, but if you can move past these issues, there’s definitely a solid little speaker here, and one that can talk to a Bose SoundTouch system.