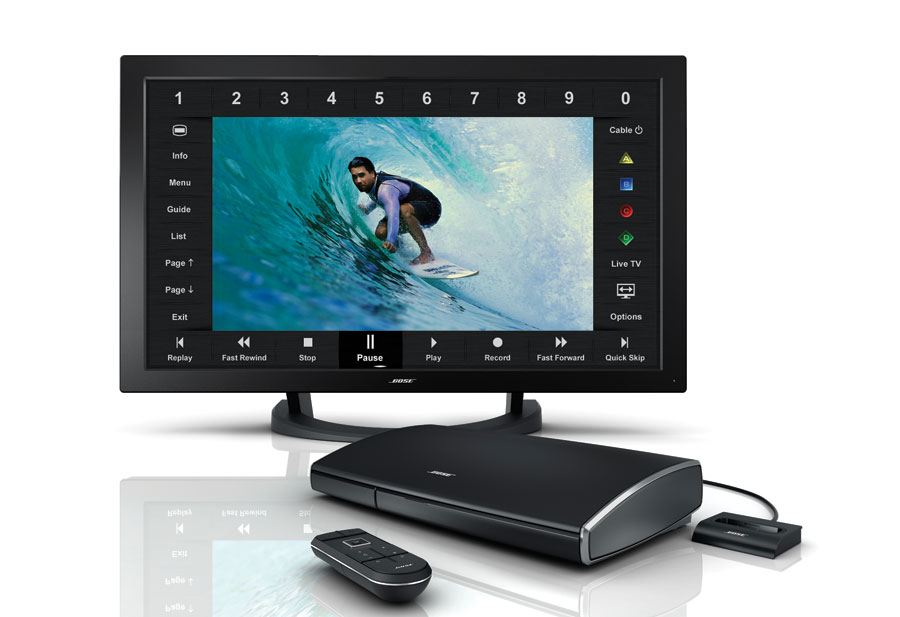 Bose VideoWave – the surround system with a TV’s face

More than ten years in development, The Bose Videowave packs a surround sound system into the rear panel of a 46 inch 1080p LCD monitor with the intention of eliminating the complexity the company says is limiting penetration of home theatres to just one-third of households.

The sound system comprises seven midrange drivers set into the top of the panel, and six bass drivers mounted in opposition to each other at the bottom of the cabinet. The output from the bass drivers is channelled through Bose’s Wave Guide, a twisting port design that terminates in a down-firing vent. High frequencies are assisted by DSP technology and Bose’s new Phase Guide, a tube that uses a fine mesh to filter sound and provide extremely directional high frequency effects.

A demonstration of the ‘tube’ by Bose at the product’s launch, for example, ‘painted’ sound in an arc from left to right above the heads of the audience, with the effect being that sound was clearly localised as coming from the walls of the room and the ceiling, rather than from the point source (or driver) itself. This ability to project sound around a room – and from the tweeter’s fixed location behind the TV’s moving image – is important for creating convincing surround effects, and an audio experience that goes beyond the screen.

All this audio gear, plus the amplifiers that drive it, adds considerable heft to the LCD panel, though, which weighs in at around 50kg, or more than three times conventional 46 inch LCD sets. It can, however, be safely wall mounted using select VESA mount and bracket systems.

The panel (it has no TV tuner) connects via a single cable to a standalone console, which acts as a switching centre for up to five attached devices such as Blu-ray players, PVRs and games consoles. The $7999 system also includes an iPod dock and Bose’s genuinely nifty Click Pad remote control. Driven by RF, this eschews the myriad buttons of most of today’s remotes for just six – power on/off, source, volume, channel, mute, back – plus a central computer-like track pad inset with directional arrows.

Select a source and its control options are immediately displayed around the perimeter of the screen, with the image reduced and centred in the screen. With a connected Tivo for example, pause, play, rewind, live TV, etc were all available, as were numerals for selecting channels.

Selecting a function involves tracing your finger across the remote’s trackpad. You’re movements are, in turn, tracked onto big screen, and you need only click on the track pad as the control you want is highlighted at the screen.

Bose says that the controls displayed on the screen are specific to the selected source, be it Foxtel, a Blu-ray player, games console or CD player, meaning there are no superfluous options to confuse users. Selecting the Menu button, for example, brought up Tivo’s bespoke interface and access to all its features, including recorded programs, scheduling preferences and setup functions.

The Click Pad remote and its corresponding interface is a real winner and deserves to be marketed widely as a standalone device to bring sense to all multi-component home theatre setups. At present, though, it works only with Bose’s VideoWave.