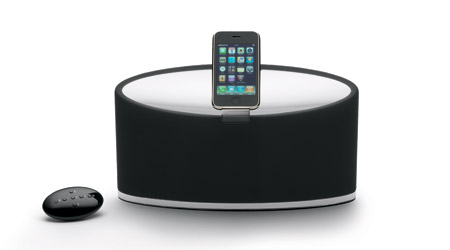 Bowers & Wilkins’ Zeppelin range has included eye-catching models in the past, and the Mini is no different, with a reflective concave top to its solid speaker array, above which floats your iPod or iPhone. While many iPod Docks can be eye-catching, the Zeppelin did have us rather entranced thanks to the hall of mirrors style distortions that play over its reflective surface. Sadly, as with most shiny gadget surfaces, even the lightest of touches leave it with plenty of fingerprint smudges.

The Zeppelin Mini is an AC-only powered dock that will recharge connected iPod and iPhones, and can even be used as a synchronisation dock if you add a USB cable to it. This will also allow the Mini to stream music from your PC.

Rather than use small dock adaptors, the Zeppelin Mini comes with an assortment of plastic backing boards that your iPod slots into very snugly. One criticism here is that it can be a bit tough to remove an iPod once it’s slid its way into position. It supports vertical or horizontal orientation once an iPod is locked in, and it’s shielded for iPhone users.

The remote is from the looks-before-utility school of design. It’s a pleasant-looking black egg with tiny buttons, and it’s genuinely quite hard to pick orientation on it without looking. Given one end houses the on/off button, this is less than optimal.

Audio quality was quite good across a variety of genres, but not stellar in the range of higher end docks. That’s somewhat understandable given the Zeppelin Mini’s small size, as there’s less differentiation between the stereo speakers, and from a distance some audio detail is lost. Up close though, it will give subtle nuance to most musical types.

It’s not the be all and end all of audio quality, but those wanting solid audio in an eye catching form will be very happy with the Zeppelin Mini.