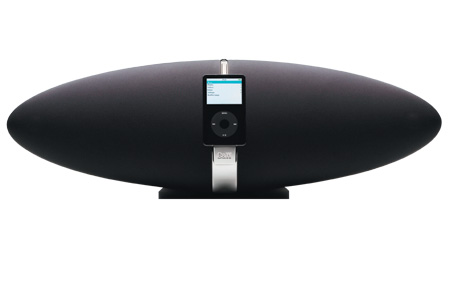 I continue to be astounded by the performance that modern audio system designers are managing to extract out of very compact systems. The latest on this front is the appropriately named Zeppelin from the highly respected British loudspeaker builder, Bowers and Wilkins (B&W).

The Zeppelin is not merely a speaker system. In fact, its primary purpose is as an iPod dock.

The first thing you notice about the Zeppelin is its shape. And then there is the band that circumnavigates it, with the iPod docking port placed right in front of the unit. Most such docks have a reasonably large base with a standard-sized notch in them. These notches are designed to accept the adaptor inserts provided with most iPod models, allowing them to securely support your specific model.

The Zeppelin eschews all that. Instead it has a very narrow, metal-finished base, just a little larger than the plug assembly itself. This is attached to the metal strap around the Zeppelin, hinged slightly so that it can tilt. In that way it accommodates the iPod without any of the normal bulkiness. In fact, it leaves your iPod – especially if your iPod is white – looking like it is simply hovering there in front of the Zeppelin.

The unit also has a combo 3.5 mm analog/digital audio input socket so you can use it for non-iPod music devices. Also on the back are composite and S-Video outputs. These are provided to allow photos and video to be displayed from your iPod. They do not support the display of iPod menus, though. The USB port is merely for upgrading the unit’s firmware.

The sound of the devices was simply astonishing. Not because it was the best sound ever – which of course it wasn’t – but because it was so good for such a compact unit.

First, it went loud. Not wild raging-party loud, but room filling. At the higher levels it sometimes sounded a bit stressed, but not unduly so.

Second, it delivered decent bass. The bass was not extraordinarily deep – in my room it would not manage the 47 hertz claimed by B&W But it did do a solid 58 hertz, and with the full presence of middle and upper bass it sounded complete.

Third, the tonal balance was good, with a clearly extended high end and everything pretty much at the level at which it should have been. The cymbals had zing, the vocals were clean and recognisable, with no artificial sibilance. Nice! Meanwhile, the percussion section of rock groups punched through.

Finally, it delivered a surprisingly wide stereo image. Even sitting a couple of metres away there was a clear sense of width.

There were two problems, though: the bass was too strong when the unit was placed up against a wall, and especially in a corner, which is where it would best go in many rooms. Second, the remote control was frustrating because of its limitations. You can change input and volume and switch on and off and skip tracks with it. But you cannot navigate the menus, so in the end you will have to walk over to the unit.

Still, this is a fine music player, powerful, offering real sound (not some kind of tinny substitute). If it fits your decor, it is certainly worth a close look – or, rather, listen!