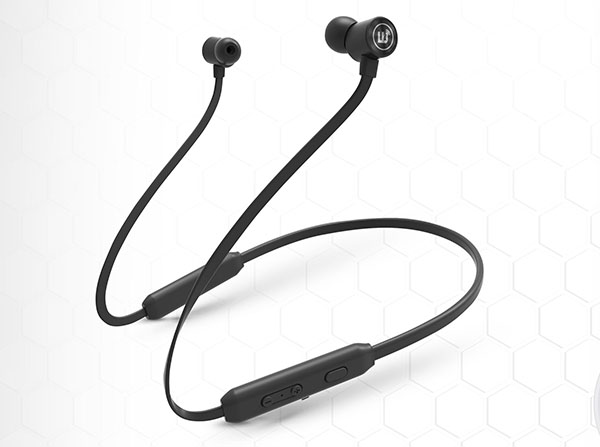 The BLU-300 earphones are small, lightweight buds joined by a cable. Or, more precisely, they are joined by short cables to a flexible neckpiece. The neckpiece is in a U-shape and at each end are pods. These hold the rechargeable batteries. The right-hand one also has the control buttons and the Micro-B USB charging port. About 200mm of cable connects each bud with the relevant pod.

I have to say that I loved this arrangement. There is no weight on either pod, so they sat securely in my ears. I rarely had to reseat them. Neither was there any pulling to either side. These are a very comfortable wear.

The buds are magnetic so that they stick together when not in use. That makes it easy to hang them up. Brainwavz includes three sizes of silicon tips.

The battery life is rated at eight hours and charge time is two hours. The charge port has a rubber stopper to protect it from the elements. The BLU-300 earphones carry an IPX7 rating, which is rather higher than I would have expected. I’d suggest not dropping them into a metre of water. But they should be fine with a bit of rain and sweat. That said, the stopper did seem to be quite easy to dislodge accidentally.

The arrangement of control buttons is a little unusual. There are three, which is the norm. But rather than having the multifunction button between the volume controls, it’s a little apart from them on one end of the control pod. You use this button to:

Listening to the BLU-300 earphones

My GooglePixel 2 XL phone reported no special codecs in use, and neither is any claimed, so audio is delivered entirely using the basic SBC codec.

Once I started listening I had quite the surprise. These things sound pretty good. The weakness of many earphones – and not just inexpensive ones – is too much treble. It makes them sound tinny, and it tires the ears. These earphones had treble, but controlled and fairly well-balanced treble.

They provided a comfortable sound, with sufficient bite and dynamic responsiveness to make listening to music a pleasure. The balanced treble kept the human voice clear and coherent for phone calls and podcasts. Yet the overall sense was a comforting mellowness.

Right now, I’m listening to Pink Floyd’s Animals. The kick drum is solid, with a controlled undistorted thump. The other components of the drum kit are going suitably loud, punching through the mix. The voice is clear. Because the BLU-300 earphones remain well-seated in my ears, the bass remains strong even as I move around.

The Bluetooth connection with the phone was very solid. I could keep the phone in any pocket with no dropouts. In my usual walk-away test I made it to fifteen metres before there were any connection issues.

The earphones announce when they’re being switched on or off with a female voice. They don’t report the battery level. The Google Pixel 2 XL showed the battery level on the Bluetooth connection page.

So, here we have a set of Bluetooth earphones which challenge many models costing twice as much. Are there any weaknesses? Well, every so often there was a very low level, barely audible buzzy noise in the right earbud. It usually followed notifications. It sounded like some kind of electronic connection noise. I had to strain to hear it. It may have had something to do with mixing the notification audio stream into the main music stream.

The other potential weakness is timeliness. You won’t find the BLU-300 earphones in your favourite bricks-and-mortar retailer. They are available online only from the Brainwavz website. Here’s a link to the product page. Brainwavz offers a replacement warranty for twelve months.

If you order, they’ll be sent to you directly from the Brainwavz warehouse in Hong Kong. The price includes postage but delivery takes 10 to 25 days.