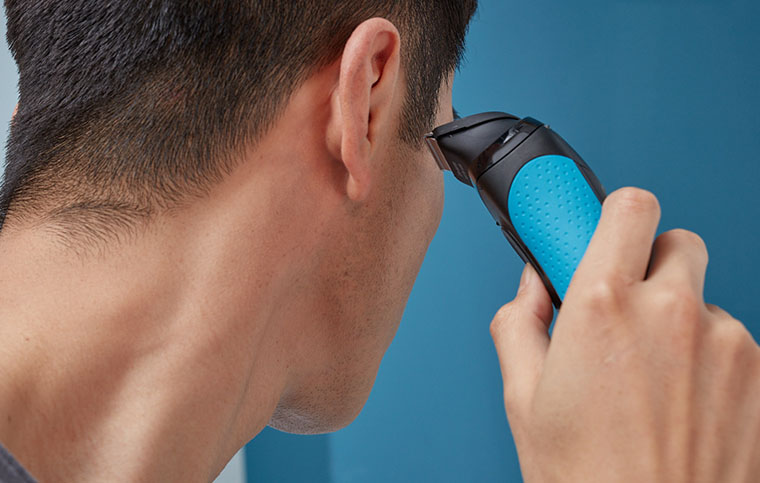 That explains things. I was wondering why Braun, well known as a German maker of electric shavers, should be selling a kit with a Gillette razor (specifically, a Gillette Fusion ProGlide) bundled within. I always think of bladed razors and electric shavers as competing, not complementary, products. It turns out that the 96 year old company was for several years owned by Gillette, and is now owned, along with Gillette, by Procter & Gamble.

Well, Braun has been in the electric shaver game since the early 1950s, and has now launched three new product lines which ought to keep it well entrenched there. All three are rather well priced.

At only $99, the Braun Series 3 Clean and Close has three “independently floating cutting elements” underneath, as far as I can work out, two “SensoFoils”. Those are the thin, flexible sheets of perforated metal that do that actual cutting (the heads push the hairs against the edges of their holes). The foils use Braun’s “OptiFoil” technology, which involves at least two hole sizes arranged in a “sophisticated pattern” to minimise skin irritation and provide for a closer shave. The middle trimmer band captures and cuts longer, thicker hairs.

It is, of course, thoroughly waterproof, with an IPX7 rating. Formally that means immersion in up to a metre of water for half an hour, but Braun says that it’s fine for up to five metres. Either way, that’s plenty for rinsing it out and, of course, using it in the shower.

A pair of NiMH batteries give it twenty minutes of running time. Five minutes of charging is enough for one shave. The charger is multi-voltage for travelling. It’s availablein blue, black or red.

For $159 the Braun Series 3 Shave & Style adds a swappable head so you can both shave and trim. The trimmer head works with the five included combs which provide for 1, 2, 3, 5 and 7 millimetre cut heights. That last one’s just a bit more than a quarter inch.

The other features are similar to the Clean & Close, including it being waterproof, providing wet and dry shaving, a supporting a quick charge for one shave, but it adds “MicroComb technology” which feeds hairs to the middle trimmer, catching more with every stroke says Braun. There’s also a travel pouch.

Keeping with the theme of flexible heads, Braun has released its first full styling range, with a clipper, combs and various switchable heads for such things as ear and nose hair trimming. And, of course, the Gillette Fusion ProGlide.

This is also water proof and the trimmer has 39 trim length settings so you can get those facial hairs just so.

It comes in a number of configurations, starting at $119.

All three products are available at the Shaver Shop.