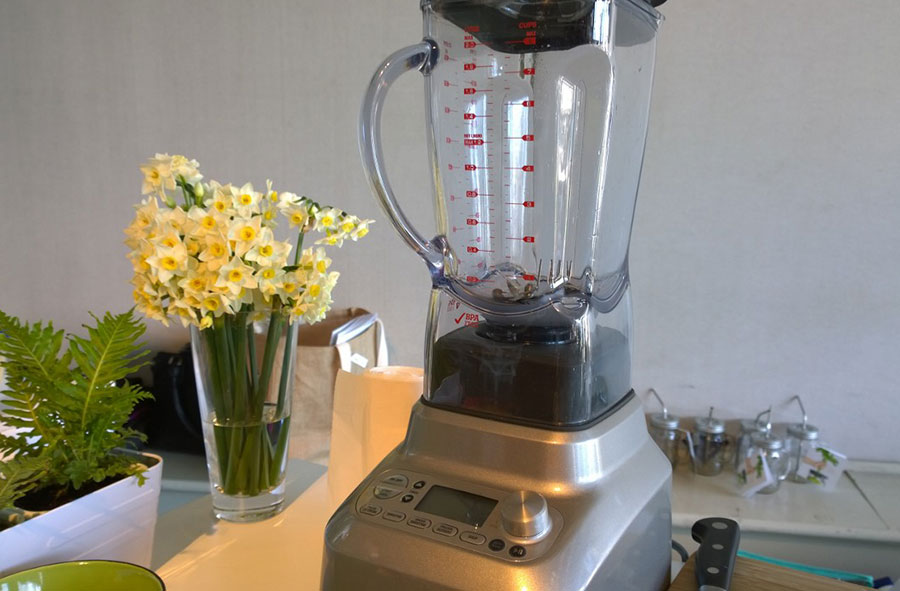 It’s not just about slapping a name of a celebrity on the product and hoping for the best,with Breville actually working with Heston Blumenthal to build better kitchen appliances that work with the science of food to deliver better cooking across the board, and we’re seeing the first examples of that now in the form of a new grill and blender.

We’re on the way out of the colder months now, so both of these are timely, as they cater to barbecues and fresh drinks, though you could probably find lots of ways to make them more useful beyond these examples.

First, the Smart Grill, and if the name isn’t a dead giveaway — it is, really — the Smart Grill is an electric BBQ hot plate that will cook from both sides simultaneously, something the Breville team has learned from the molecular gastronomy that Heston’s expertise brings to the table.

It’s not just a matter of heating the meat from both sides as you cook, though, as it has to be even heat, and to help with that, the Smart Grill doesn’t have an element that runs underneath the plates, but rather through it, providing relatively even heating patterns that will keep the plate hot on each side no matter what is being cooked.

If you had any doubts about the temperature, there are presets to work with, providing a simple way of working out when you want your meat to be well done or medium rare, and options for other types of protein such as fish and chicken.

And if you still had further doubts, there’s a thermometer on the side for you to check your meat with.

We’re intrigued by the Smart Grill, not because it’s hard to cook meat, but because it is easy to mess it up, and the inclusion of a quick release plate system for the cooking plates will make it much easier to clean up than what we’ve seen on other systems.

Also grabbing our attention is the “Boss,” which isn’t a Breville interpretation on the excellence of Bruce Springsteen (but that would be cool), but rather a blender to end all blenders, and possibly take on Vitamix in the mean time.

Another gadget that has taken some knowledge from Mr. Blumenthal, the Boss is Breville’s “superblender,” using a specialised blade and bowl that work together to create smaller particles, leaving less excess pulp in the canister and literally smashing food elements into smaller pieces.

For smoothies and juices, this means less chunks, as it does for nut butters and dips, but if you want to use the Boss for milling ingredients like corn, you can do that too, making it possible to turn hard and solid kernels into flour.

Interestingly, we’re told the Breville Boss has a 3 horsepower blender, which makes it the first kitchen appliance we’ve seen that actually has a motor rated on the same scale as a car, which is impressive enough.

Pricing for either of these models doesn’t come cheap, with the Smart Grill retailing for a hair under $350, while the Boss blender manages a recommended retail price of $999, but they do throw in a nifty little Heston book made for the purpose, so that’s something.

Also seen on the day is a new coffee machine from Breville that seriously has our attention: the Oracle.

We’re not sure where Breville gets these names for, but if you’re into cafe style coffee and one person in your household likes it easy while another appreciates the complexities and art of making a proper cup, this is the machine for you.

The Oracle is both an automatic and manual machine, incorporating a grinder with built-in tamping, milk texturing, and some neat little on-screen guides to help you work out if you want a latte or a cappuccino, because yes, they’re different.

If you don’t care so much for the automatic side of things, you can go full manual with a full pulls of a knob and control it like a regular machine, but regardless, you will be charged for the high end machine, with the price coming in at $2499.

All of these machines should be heading to stores shortly, so look for them soon.