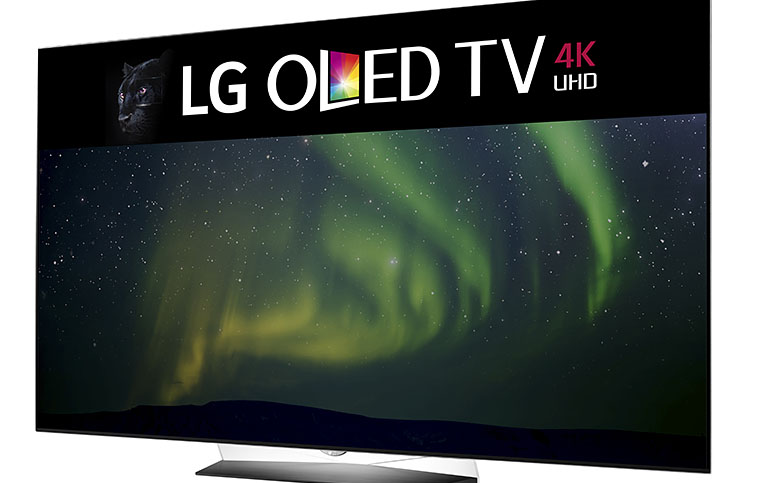 Yesterday I spent some time in the “INXS” room of the Ovolo Hotel in Woolloomooloo. Lined up there were three 65 inch LG OLED TVs. LG was showing off its newest series of OLED TVs, the B6T series. This series incorporates a number of quite significant improvements over the series it’s replacing.

Before getting to the details, let’s remember what OLED is. Organic Light Emitting Diode panels are a relatively new way of producing images. LCD panels work by using liquid crystals to control the amount of light passing through them. So-called LED  TVs are LCD TVs which use LEDs to produce the light. Most of these “localise” the light, so the brighter parts of the picture have a stronger back light, while the darker parts have their light turned down.

The problem is, low levels of light still manage to leak through the LCD pixels, even if they’re completely switched off.

With OLED, each pixel generates its own light. There is no backlight. If black is needed, the pixel switches all the way off. The result? Perfect blacks, all the way down to the pixel level.

So, back to LG’s new offerings.

There are two B6T models: 55 inches (model OLED55B6T) and 65 inches (model OLED65B6T). Both are flat screen models rather than curved (LG shared that the flat screens are far more popular than the curved ones). Apart from size, they’re pretty much the same. The headline new features are that they are brighter, that they support Dolby Vision, and that they use the 3.0 version of LG’s WebOS operating system.

Of course, they have all the stuff you expect in a premium TV today: Ultra High Definition; support for UltraHD Blu-ray; recording and time shifting of live TV; network with web browser and assorted apps, along with both wired and WiFi network connections; screen mirroring via Miracast from your Android phone or Windows 10 computer; remote control app; Freeview Plus EPG and catchup TV; voice commands and, more importantly, the ability to search for programs by voice; Bluetooth for external speakers or headphones; Harman/Kardon designed audio; USB connections; music, video and photo streaming from the network.

And, being OLED, the panels are super slim, just a few millimetres thick for more than half of their surface.

Apart from such things as built-in webcams, which nobody does any more (I guess they seemed a bit 1984-ish to customers), you’re going to be hard put to find any features which are missing.

So what were those three new features?

First, they are brighter and more colourful. No other modern TVs can match OLED TVs for deep black levels, and very, very few can even come close. But some premium LCD/LED TVs have partly made up for this at the other end by offering much higher brightness levels. The LG B6T TVs have bumped the brightness levels from their predecessors’ 420 nits to 700 nits. That makes them better in the day time, and takes better advantage of such things as High Dynamic Range UltraHD Blu-ray movies.

In addition, LG has bumped up the colour capabilities from 88 per cent of the P3 DCI colour space to 99 per cent. If that doesn’t mean much to you, don’t worry. It just means that the TV can reproduce more of the colours on new media such as UltraHD Blu-ray.

To demonstrate some of this, LG fed the same UltraHD picture into a B6T TV and one of the previous models and showed some interesting scenes. In very bright sections the older TV was much less well defined because all the bright and nearly-as-bright stuff merged together – this is called “crushing”. On the new TV instead of a splodge of brightness, a lot of detail was visible. Particularly noticeable was how the blue was revealed in a bright sky rather than being hard to distinguish from the clouds.

Next: Dolby Vision. This is built into the TVs, but is still bit of a promise rather than a reality. Dolby Vision expands on the capabilities of HDR, providing an even greater dynamic range. LG and Dolby Laboratories tell us that it has a great deal of support in Hollywood. The idea is that movies will come with “metadata” describing how the picture is to be tweaked on playback on a scene by scene basis to provide the best colours, the best brightness levels and so on. This can only be done using a special Dolby Vision chip in the TV, so it’s good to have this built in even if the promise is for some time next year when it’s expected some Dolby Vision UltraHD Blu-ray discs will begin to appear.

Since there are no such discs yet, the demonstrations by LG were using special files (on USB I think) for the Dolby Vision stuff, with regular UltraHD Blu-ray for comparison. Different sources means you can’t entirely put different results down to the TVs alone.

Nonetheless,  there were clear differences of a kind which suggested Dolby Vision delivers real benefits, with even greater clarity and definition at the bright end of the range.

Finally, the new TVs get the latest version of LG’s operating system. It is now webOS 3.0 and is powered by a quad core CPU. The concept remains the same, with a row of small panels from which you can choose what you want to do laid out across the bottom of the screen. These can be re-arranged to match a user’s preferences, and one of them quickly takes you back to the last thing you were doing.

This all worked very snappily in the demonstration, as it did with a bit of hands on. LG still has the best smart TV remote, with an on screen pointer controlled just by moving the remote control. It takes only a minute to master and is surprisingly precise. Importantly, and unlike a lot of the competition, the point and click control works across all functions of the TV, including inside apps.

There were some other interesting things shown. An Xbox One S was doing a fine job on a G series OLED TV (these cost a fair bit more, and are a touch brighter at 750 nits). It turns out that you can buy a 77 inch version of the G series, but you won’t find them in stores. They must be ordered specially, and I understand that you will receive change from $40,000, but not a whole lot of it.

LG is working on new production techniques to increase yield, which will in turn yield lower prices, including developing an industrial process to “print” OLED screens.

As for life span, LG is confident that its panels will run for eight hours a day for ten years before their brightness is reduced by fifty percent (the common measure for panel life). It does not believe OLEDs suffer from “burn in” (permanent marks left on the picture by menus that have been left showing too long.) At the same time, it has incorporated a feature in its OLED TVs called “Clear Panel Noise”, which “equalises” the output of the display transistors just in case any unevenness should develop.