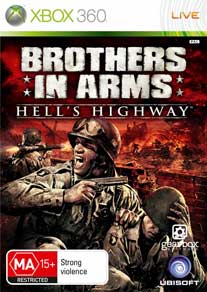 Brothers in Arms takes the ‘first person shooter’ genre and attempts to make it more of a thinking person’s game, giving not only a slower, more realistic pace to the combat but bringing in an over-arching storyline, to try and make you care more about the soldiers you’re playing with and not treat them like the throwaway cannon fodder seen in most examples. Given the vast number of titles based on this particular war, introducing a more tactical approach to a first-person WWII shooting game isn’t a bad idea. But you run the risk of slowing down the fast-paced excitement associated with the genre and that’s exactly what happens here.

It’s not that a bit of strategy is unwelcome, but the ‘Find cover, suppress the enemy, flank them, shoot with horribly manual and basically crap rifle’ routine that you settle down into from the first mission very quickly becomes deathly dull. You die a lot, then you get to repeat the same process of ‘locate, creep up on, slowly pick off enemy’ again and again and again. The artificial intelligence is actually disappointingly dumb far too often and the long drawn-out video narrative simply isn’t interesting enough to keep your attention as it plays out, so you don’t so much care for your fellow soldiers as hope they die a quick, early death and let you just get on with playing the game on your own.

Adding to your plight of having hopeless comrades, the tactical elements are often made entirely redundant by ‘cheating’ AI that will instantly snap the attention of an enemy soldier over to you as you’re mid-flank, despite the careful covering machine-gun fire you’ve spent the last few minutes laying down. Without actually hitting anyone.

The game also suffers from really poor visuals, including in the non-interactive video ‘cut scenes’, which games developers tend to polish up to try and show off their graphics. Here, however, they judder along in low detail, with characters that look like they’ve had one too many facelifts, with their expressive voices never matched with their facial movement. Environmental detail is low, with terrible textures in evidence everywhere, seriously detracting from the intended effect of immersion in the horrors of war. Horror of colour-palette more like, including a dreadful ‘red screen’ effect as you take hits, somewhat redundantly alerting you to the fact that your character is about to bleed out and die, which you know because you’ve just been standing there while a supremely gifted crack shot on the other side had been casually slotting bullets into your skull as your woefully ditzy aiming reticule has been ineptly skittering just about anywhere but near his body.

Brothers in Arms: Hells Highway is a really mundane affair and entirely misses its intended target of making you both care about, and be repulsed by, the horrors of war. It’s hard to believe it’s even on the same generation of gaming hardware of its older and far better competitor Call of Duty: Modern Warfare.

This review was conducted on the Xbox 360 console. The game is also available for PlayStation 3.