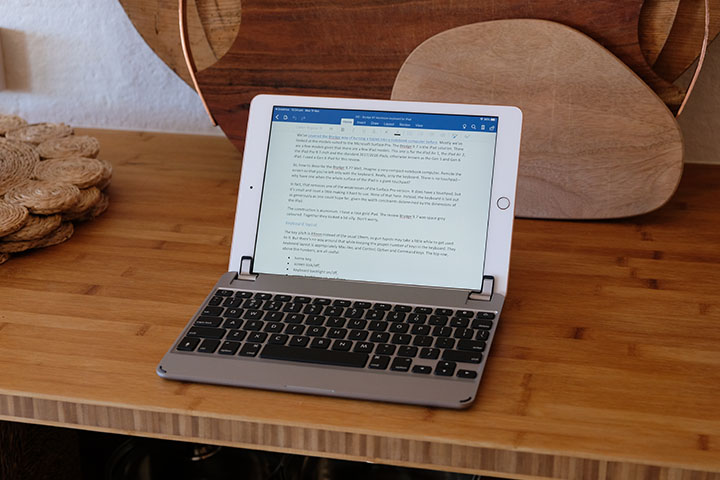 A while back I was writing about ways of turning an iPad into a compact computer. The Brydge 9.7 keyboard delivers what must be the most computer-notebookey experience possible with an iPad.

We’ve covered the Brydge way of turning a tablet into a notebook computer before. Mostly we’ve looked at the models suited to the Microsoft Surface Pro. The Brydge 9.7 is the iPad solution. There are a few models given that there are a few iPad models. This one is for the iPad Air 1, the iPad Air 2, the iPad Pro 9.7-inch and the standard 2017/2018 iPads, otherwise known as the Gen 5 and Gen 6 iPad. I used a Gen 6 iPad for this review.

So, how to describe the Brydge 9.7? Well, imagine a very compact notebook computer. Remove the screen so that you’re left only with the keyboard. Really, only the keyboard. There is no touchpad – why have one when the whole surface of the iPad is a giant touchpad?

In fact, that removes one of the weaknesses of the Surface Pro version. It does have a touchpad, but it’s small and inset a little, making it hard to use. None of that here. Instead, the keyboard is laid out as generously as one could hope for, given the width constraints determined by the dimensions of the iPad.

The construction is aluminium. I have a rose gold iPad. The review Brydge 9.7 was space grey coloured. Together they looked a bit silly. Don’t worry, the Brydge 9.7 is available in rose gold, space grey and silver finishes, so it will match your iPad.

The key pitch is 17mm instead of the usual 19mm, so gun typists may take a little while to get used to it. But there’s no way around that while keeping the proper number of keys in the keyboard. The keyboard layout is appropriately Mac-like, with Control, Option and Command keys. The top row, above the numbers, are all useful:

The keys are islands, but generously sized. On the right-hand side is a Micro-B USB port for charging the keyboard’s battery. One small improvement would be to replace the Micro-B USB charge port with an Apple Lightning-compatible one. Then the iPad user wouldn’t have to carry a spare charge cable.

Brydge rates the battery life at three months, based on two hours use per day. I imagine that if you were to top up the battery every month or so, you wouldn’t run into any problems.

When you plug in the keyboard to charge up, a bright red LED illuminates near the power key and stays lit, so it’s very clear what’s going on. It switches off when the keyboard is fully charged. You can check the state of charge during use by pressing the battery key. It shows three levels of charge.

Setting up the Brydge 9.7

Two hinges protrude up from the back of the Brydge 9.7. These are spaced just slightly wider than the height (which of course becomes width in landscape mode) of an iPad screen. Rubber shims fit inside to both hold the iPad by friction, and ensure it isn’t damaged by metal contact. When you open up the iPad, it switches on, although you’ll still need to use whichever unlocking method you use to start using it. I used my right thumbprint on the home button. When you close the “lid”, that puts the iPad to sleep.

When opened, the bottom of the hinges become the rear stand, canting up the back a little for slightly improved typing angle.

As delivered, the Brydge 9.7 had rubber “shims” fitted for the iPad Air 2 and the iPad Pro 9.7-inch models. The shims are the rubbery spacers that make the aluminium iPad holders fit the different models. Those iPads are a little thinner than the iPad Air 1 or the regular 2017/2018 iPad models, so the shims need to be replaced with the included slightly thinner ones.

Since they’re stuck on, this is a fiddly process involving some scraping of residual tape and glue. The instructions say you only need worry about the larger bits, but I could imagine the adhesive of the replacement shims grabbing at the old adhesive, so I removed it thoroughly. A bit of careful work with some paper towels and mineral turpentine did the job.

Then I let the keyboard charge up for a couple of hours before applying the new ones, just to make sure it had thoroughly dried out.

Of course, the Brydge 9.7 talks to your iPad via Bluetooth. You pair in the usual way via the settings app on the iPad. Thereafter, you two devices remained reliably connected. Typing latency was low. Yes, there was a very slight delay compared to my usual typing rig of a Windows computer and wired keyboard, but not enough to be troublesome. And not enough to be measurable by any technique available to me. I only mention it in case you intend using the keyboard to control game play in some way.

The only problem I had using this keyboard was the bottom left hand key. That was marked with a microphone and you use it to invoke Siri. My Windows-habituated fingers kept hitting it whenever I stretched out for the control key. The control key is, in fact, one in from the edge. I soon worked out that this could be cancelled by hitting the “Home” key at top left.

In the coffee shop

Apart from that, using the Brydge 9.7 was an entirely positive experience. It is very solidly built. The 1.2mm keystroke range was ample, and as each key hit the stop at the end of its throw, it stopped hard. The body is solidly built and feels it. There’s no flex. Apart from the narrower pitch, the typing experience was as good as that on the best notebook computers.

In fact, I am typing right now in the Blank Canvas café in Batemans Bay, New Sound Wales, freed from my office in part by the extreme portability of the unit. With a total weight — iPad plus Brydge 9.7 — of 985 grams, it’s easy to take around with me. The combo starts up more or less instantly, instead of the gear grinding of Windows on my regular Surface Pro. To be fair, even that normally gets going within ten seconds or so, but there’s something truly pleasing about the instant-on of this unit.

Again, this is primarily for typing and text entry, with a little web surfacing and email checking. For that? Just about perfect.

The Brydge 9.7 is a great way to turn your 5th or 6th Gen iPad, or iPad Air 1 or 2 into a kind-of notebook computer … one that’s very good for text entry and the like.

Brydge’s website for this product is here. Note that there’s now a new model regular iPad (7th Gen) and it has a bigger screen. So for that you’ll need the Brydge 10.2. It seems to be pretty much the same … except that it boasts a four-times-longer battery life.