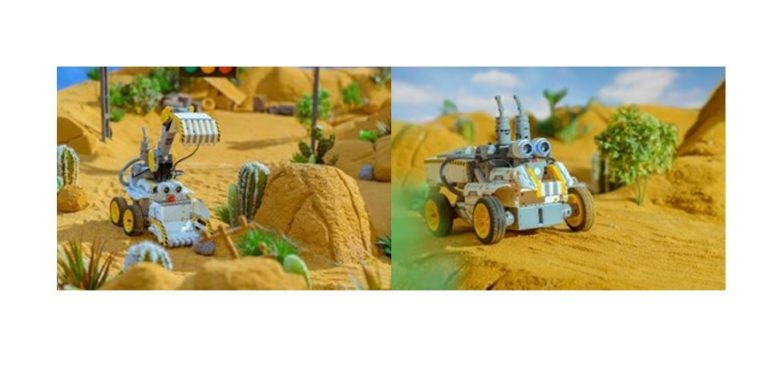 The UBTECH Jimu range of smart build-your-own robots has a new member. Meet TruckBot, and he is suitable for children eight years or older.

The Jimu system is like a mix of Meccano and Lego. It comprises

The TruckBot kit will build both DozerBot and GravelBot. Or knowing creative kids form the basis of many FrankenBots too.

TruckBot is for kids, but adults will love it too

If it were just a toy, kids would soon tire of playing. Although some of its pre-programmed actions like boxing, happy, angry and more are entertaining enough.

The real attraction is what else they can do with it. And like Lego, you can buy any of the over 600 add-on pieces to create your Jimu world. And spare parts are cheap – you can get additional controllers for US414.95 and a pair of smart servo motors for $39.95. I particularly like the T-Rex and Penguin add-ons for $49.99 each.

Hint Dad – Jimu is great for years of Birthday and Christmas presents.

There is also an online community where kids can share their creations and help others. This is addictive stuff – kid versus kid.

That brings us to Blockly Coding

Once assembled you download the iOS or Android app and you can use the pre-programmed actions, Or you can enter the world of Blockly Coding.

Simply put, it is an icon-based, drag and drop coding tool. It secretly teaches coding logic. “No Johnny you can’t crash it if you enable the presence detector”.

It also has a learning mode (PRP – Pose, Record, Play) where you can manipulate the robot, (e.g. lift an arm) and it will write that block for you. No more running to mum in exasperation saying, “It won’t do what I want it to do.”

UBTECH is finding a huge market in education. It says STEM learning with Jimu Robots enables kids to learn to code from an early age. In a few years, everyone will be expected to have programming skills. Jimu Robot Kits enable children to learn and retain basic coding skills for their future academic and real-world applications.

UBTECH says it suits from 8 years to university students.

We think the latter may want to explore other UBTECH robots

The kit is A$179 and is available from OfficeWorks, JB Hi-Fi and Harvey Norman.

While this article is about the kids and educational TruckBots, it is also about a more significant issue. Acceptance of robots in every home and every job.

The robots I am more familiar with are industrial ones. They do highly repetitive, precision, boring or dangerous jobs that humans are ill-equipped to do.

There is a fear that robots will take over jobs. Only if we let them! In fact, the word robot comes from the Slavonic ‘rabota” meaning servitude – to help us.

What we fear more is Androids from the Greek ὰνδρο (andro-), meaning ‘man’, and the suffix -ειδῄς (-eides), meaning “form, likeness, appearance, or resemblance to man. Too many Androids a.k.a. Terminator is a diabolical tool of Satan!

It is essential that kids are prepared for the robot generation coming.

Just as in the late 80’s we started to prepare them for computing – breeding a race of digital natives.

UBTECH was formed in 2012. It has just finished a new round of funding gaining US$820 million from Tencent, the Industrial and Commercial Bank of China, Haier, Minsheng Securities, Telstra, CDHFund, and others.

UBTECH’s secret sauce is its high-torque servo motors that allow rapid and precise movement of limbs and wheels.

Most of its products are standalone and don’t require the cloud. But that is coming too. It hopes to launch a robot cloud service platform and a new generation of low-cost, large-scale humanoid service robots in 2020.

The video below ute – Alpha 1 holds the world record for Dancing Robots.