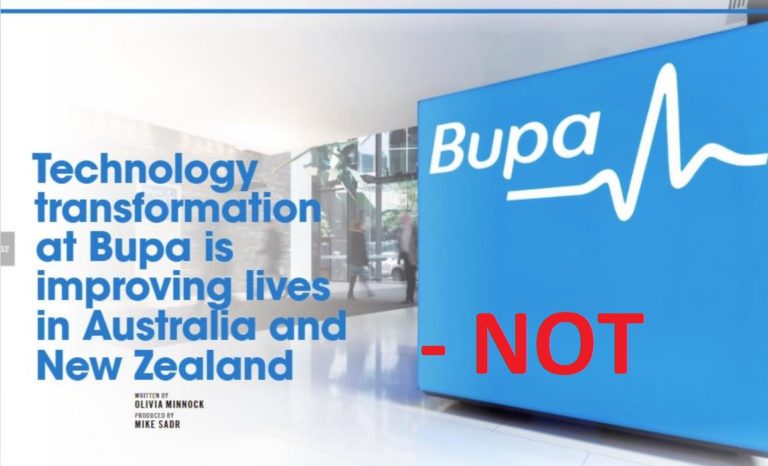 Health fund BUPA has direct debited members credit cards or accounts twice for annual health insurance fees. It seems to be for both annual and month-to-month direct debit payments and as far as we are aware it is for June 2019 payments.

BUPA is a long-established fund, formerly Medical Benefits Fund (MBF) and is, or was relatively trusted by members – until now. In fact, according to Product Review Australia, it now rates 1.4-out-of-5 from 569 reviews (469 of these were one star).

BUPA has not emailed nor contacted affected members.

Nor has it put the message in bold type on its home page or gone to media to admit the error and put its member’s minds to rest.
Update: We understand it has avoided Channel 7 News all day since GadgetGuy broke the story at 8 AM today. And affected members have received an email. See of this article.

I rang today (11 June), and the attendant said there was nothing its staff could do as it was a computer glitch and a refund would be made in bulk. When asked how long that would take the attendant casually said, “A few days.”

Others affected have rung BUPA to hear the same story – ‘Sorry and we will refund within three days,’ but that appears to be just to be PR spin.

On further probing it admitted that affected members could send a copy of their bank statement to [email protected] and they would refund any overdraft or dishonour fees. Pity that does not put bread on the table or cover the stress of not having enough money to pay other bills!

GadgetGuy’s take: Don’t rush off to price comparison websites – you will be worse off

I don’t care how cute and cuddly the mascots are, or how many promises are made to save you money – price comparison websites suck big time. The ACCC has these in its sights, but it’s going to take a cataclysmic event (like a Royal Commission) to fix an industry full of money-grubbing companies purporting to compare the market to save you money. In reality, all they do is funnel business to their ‘selected’ commercial partners and rake in hefty fees.

I find the statement below hard to believe in relation to the secret deals BUPA has with price comparison websites.

GadgetGuy has published an interview with Emberpulse’s CEO, Dom Gelonese about absolute con job price comparison websites are getting away with, in the energy industry. It’s a great read.

After our article this morning, BUPA buried a half-baked apology in the newsroom section of its website (not on the front page as requested). The apology is here.

Approximately 50 000 of Bupa’s 4 million health insurance customers were accidentally double charged last Tuesday 4 June due to a fault.
All affected customers will be contacted directly and fully reimbursed today.
Director of Customer Experience, Sally Damiani, says Bupa is extremely sorry for the error.
“Due to a system error, on 4 June some members’ credit cards were accidentally charged twice for their health insurance premium.
“We apologise for the mistake and for the inconvenience this has caused customers.
“This matter was taken very seriously. We are alerting affected customers but most importantly we have rectified the issue and all customers will have the amount refunded today.”

An email (below) was sent to affected members at 1.49 PM after my demands earlier that day.

But what is more annoying than an insincere apology is that it has known about this since 4 June and done nothing. In fact, it is lying as in my case as the debits were on 5 and 6 June (not 4 June as claimed) and there are at least 50,000 other in the same boat – its a real hardship to be double billed.

According to a recent survey, 46% of people never pay their bills on time and 61% have hardships and have to juggle their bills from paycheck to paycheck. Sorry – not good enough BUPA and your casual approach deserves maximum condemnation.