Buzz!: Brain Of Oz trivia game on sale in March 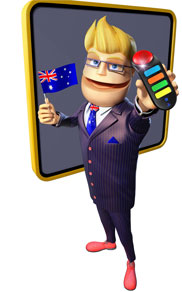 This year, Buzz is on his way to Australia. Sony Computer Entertainment Australia (SCE Aust.) is sending the sharp-suited gameshow host on his first national tour, searching for our biggest trivia brainbox with a quiz that’ll have patriotic fans hitting their buzzers or waving their PSP (PlayStation Portable) for joy.

Packed with thousands of questions on various aspects of Australia, Buzz!: Brain Of Oz is available on PlayStation 3 (PS3), PlayStation 2 and PSP, and arrives this March. A laugh-a-minute game that’s easy for friends and families to pick up and dive straight into, it’ll test your trivia skills to the hilt while delivering chuckles galore every time – and PS3 owners can compete for a place on the national leaderboard to find out just who is the Brain of Oz.

For the first time in Buzz!, the majority of Buzz!: Brain Of Oz questions cover topics specific to Australia. You’ll find questions on diverse aspects of Australian life: there’ll be questions on bands, cities, sports personalities, television favourites, wildlife, food and more. Anyone can play: just round up your friends or family, grab the easy-to-use Buzz! buzzers (or simply the PSP system) and get competing. Your nattily-dressed and wisecracking host fires the questions – you buzz the answers in loads of different game modes:

With more than 4,000 questions all about Australia as well as general knowledge – all of which you can play with your friends at home or online against other trivia fans on PlayStation Network, you won’t be able to put your wireless buzzer down. Compete for the high score on the national leaderboard and play with up to eight friends across five trivia channels: Movies & TV, Music, Sport, Lifestyle and Knowledge; then, when you’ve mastered your national knowledge, go online at MyBuzzQuiz.com to write your own quizzes or download extra premium quiz packs from PlayStation Store.

Identify your friends’ trivia weak spots and pass them the PSP system- this specially designed version lets you play wherever you want, with six players able to play together on just one PSP. Each player gets their turn to answer one of the thousands of questions about Australia and then pass the PSP system on, helping select questions for friends and playing on their weaknesses. It makes for hilarious competition – and there’s a great single-player mode with 15 trivia challenges to master, awards to win and medals to collect.