BYOx – Kids bring their own computing device to school 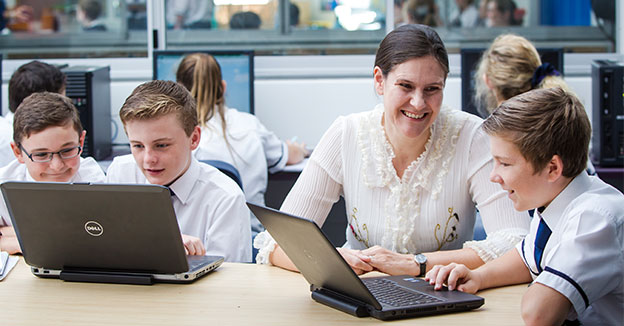 BYOx simply means bring your own computing device but how do you know what device is best? It is different too for primary (P1-7), secondary (P8-12) and tertiary students.

There are lots of problems with BYOx

These mainly stem from the vast range of Windows and Mac laptops and Android and iPad tablets provided these have detachable keyboards as well.

This raises ‘equity’ issues. Will a child be at a disadvantage using a MacBook if the rest of the class is using a Windows laptop or vice versa?

There is the issue of cost. We don’t want to create a digital divide between those who can afford and those who cannot. Cost also extends to damage/repair and loss – insurance does not always cover that. A social justice scheme is needed.

There is the software. Do we all settle on Microsoft Word/Excel, Google Docs/Sheets or Apple iWork Pages/numbers? And can the recommended educational software run on your device? What about lower-cost educational pricing too?

Finally has the school the expertise and infrastructure to handle all students using Wi-Fi and printers, let alone supporting so many computers? What about the risk of virus/malware or misuse?

The Queensland Government BYODx trial no doubt repeated in many States explored all aspects of this change in pedagogy – from leaning with a pen, paper and books, to learning on glass! Are the teachers and the curriculum – maths, English, science, and social studies ready to use computers instead of books to engage students?

The bottom line is schools really should not set the bar too high and be able to cope with almost any Windows, Mac, Android or iPad as long as it can connect to the internet. However, most schools set regulations for approved devices, and some go as far as to mandate only one type of device. Some may have a school or P&C owned/rental programs in place.

So what does that all mean?

First, ask your school for a copy of its BYOD or BYOx policy. Most state schools now have a compulsory BYOx policy for year seven onwards although from 2020 it will likely be year four onwards.

Most government schools recommend a Windows 10 laptop and have settled on Office 365 – Word and Excel as the productivity software.

Students can choose to bring another device type

You can use an iPad or Android tablet with a keyboard however differences in the way apps and websites look and function may mean they have compatibility issues. The school takes no responsibility for that.

Most also charge an annual fee for ‘infrastructure connection’ and charge for rental of academic software needed. This seems to range between $50 and $100.

If you can’t afford it, schools must offer a laptop hire scheme via direct debit or Centrepay.

Smartphones and devices without keyboards are not allowed.

The right device is a tough device

Kids often put you on a guilt trip wanting the best technology and the highest price. Then they roughhouse it in their backpack and put stickers all over it. Weight is also a consideration. Cheap laptops are heavier!

GadgetGuy’s advice is that a cheap laptop won’t last so look for rugged or MIL-SPEC rated. Good battery life – at least 6 hours of office use – is mandatory because there are not many 240V power points in a classroom.

You don’t need much processing power to run Office etc. An Intel Core i3 or i5 or AMD Athlon 3000 is fine but 8GB+ of RAM and a 256GB+ SSD (solid state drive) will get you through years 7 to 12. Avoid older Celeron, Pentium or other AMD models.

13 to 15” is most common and FHD (1920 x 1080) resolution is best. Touch and the use of a stylus is nice for things like drawing and annotation, but it adds a couple of hundred dollars. Larger screens are often heavier.

The requirement for a dedicated video card with 2GB RAM or higher is to support programmes like Adobe Creative Suite. Frankly, Intel 7th or 8th Generation Core i5 and i7 processors will easily support this.

The best way to buy Office 365 is an annual Home subscription at $129 for up to six installations. Some schools can supply a free version as well.

Acer, ASUS, Dell, HP and Lenovo dominate the Windows world. It is hard to go wrong with any of these brands. Apple has the MacBook.

All have decent products in the $699-1000 range, so it’s a matter of getting the fastest processor, most ram, largest storage and biggest [touch] screen you can. Don’t be a brand snob.